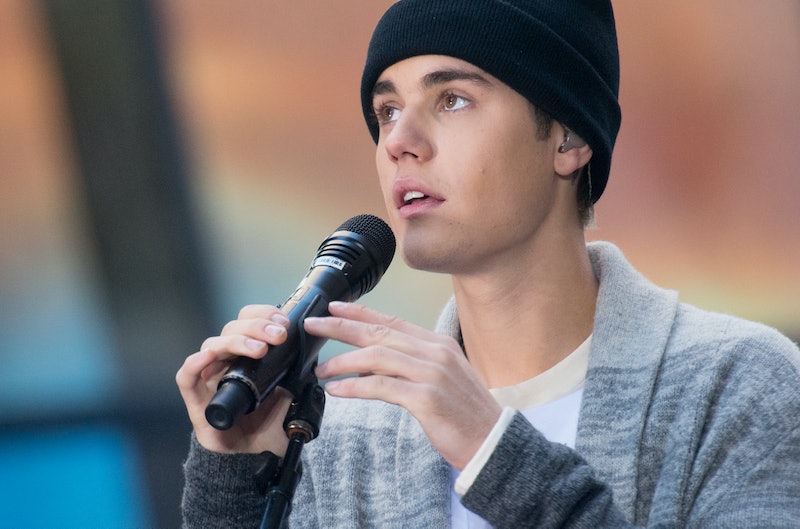 It's no question that Justin Bieber is back on his A game. The troubled singer may have been all over the tabloids for being less than a model citizen, but lately it seems that Bieber's new album Purpose, which dropped on Nov. 13, is the thing that people want to discuss most when talking about the singer. It has been three years since Bieber's album Journals, so to say that Beliebers were thirsty for more from the singer would be an understatement. Fortunately for the Biebs, Purpose has really delivered, even in the eyes of this Bieber skeptic. (Seriously, I cannot get "Sorry" out of my head. Nor do I want to.) Bieber's new music has put him back on top for all the right reasons, which is why this latest development is troubling many fans. Bieber has cancelled his performances on Stephen Colbert's The Late Show, which was scheduled for the Wednesday before Thanksgiving, and will no longer be performing at the Thanksgiving Day Parade. Understandably, fans want to know why.

Bieber has stayed mostly quiet on the specific reason for cancelling his appearances, but he did tweet at The Late Show to apologize for missing the scheduled appearance, and even promised to "make it up" to the program soon:

He then tweeted at the personal account for Colbert, which suggested that his reason for missing the appearance was personal, not professional:

Bustle reached out to CBS for comment but has not heard back at this time.

Though we may never learn the specific reason for Bieber backing out last minute, his above tweets certainly make it seem like the singer is having a difficult time, and fans should be sensitive about that, even if we are bummed that we won't get to see Bieber perform "What Do You Mean" live on a turkey float. Since it's Thanksgiving, what we really should be thankful for this year is Bieber's long-awaited new music. Here are just a few reasons why Bieber's new music should be the thing we're grateful for this year, even if we won't see him perform on Thanksgiving:

1. It's A Rebirth Of The Biebs

Unfortunately, the Biebs was more notorious for his bad boy behavior, arrest record, and tumultuous relationship with Selena Gomez than his music. Now that he's seemingly cleaned up his act, he can get back to making music we freak over when it comes on Pandora.

Don't get me wrong: I still have "Baby" on my iPod and will dance to it whenever I have the chance. Still, you can't deny that his new tracks show that he has really stepped up his game as an artist. He's experimenting creatively, and reaching for more adult themes. Plus the new tracks are downright steamy: Bieber is no longer a teen dream, but a fully-actualized heartthrob.

3. "Sorry" Is Basically An Apology To All Of His Fans

The lyrics may hint at a romantic relationship, but I'm not so sure that was Bieber's intention when he released this track. It's hard not to note that Bieber has been building towards a redemption for months now, which includes apologizing for his behavior on The Ellen Show and even allowing Comedy Central to "roast" him for the mistakes of his past. "Sorry" seems to be pointed at fans, and asks them, "Is it too late now to say sorry?" The answer is no, Biebs.

4. Major Collaborators Want To Work With Him

Bieber proved that he had the respect of Skrillex and Diplo when he released their collaboration "Where R U Now," and it became Bieber's first top 40 hit since 2013. Creating music with interesting artists is just another example of how Bieber is no longer content doing the same old thing. It's clear that Bieber is serious about growing and evolving both as a human being and as an artist.

Bieber may not be playing the Thanksgiving Day parade, but he's already given fans plenty to be thankful for this year.