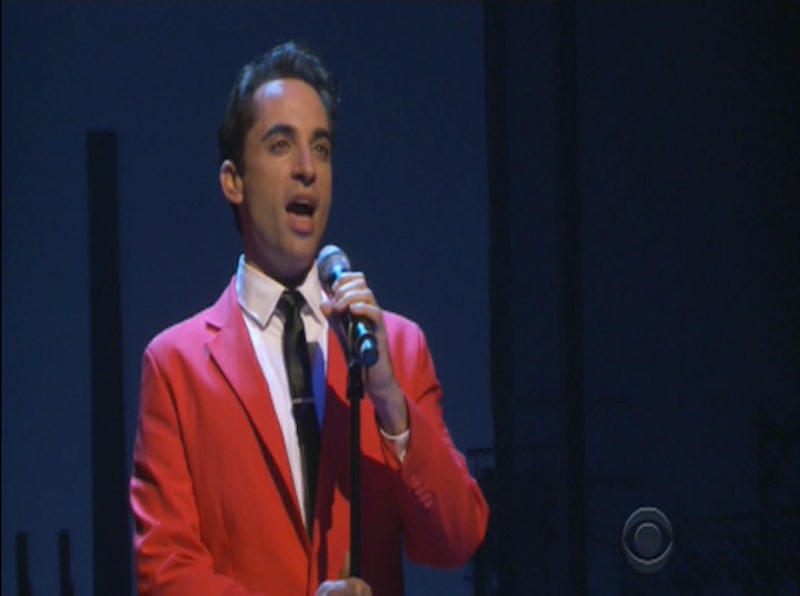 Before turkey, stuffing, and pumpkin pie steal everyone's attention this Thursday, all eyes are on the annual Thanksgiving Day parade in Manhattan. CBS is one of the networks broadcasting the parade this year, and is doing so in a very New York style: by including interviews and performances by Broadway performers. This year CBS hosts Keltie Knight and Kevin Frazier chatted with Star Trek icon George Takei, who currently stars in Broadway's Allegiance, and The Good Wife actress Renee Elise Goldsberry, who stars in the Great White Way's hottest ticket Hamilton . But while these actors' respective musicals are brand-new to Broadway, we can't forget one iconic Broadway sensation: Jersey Boys. This Thanksgiving the cast of Jersey Boys performed a medley of songs from the musical for CBS, and it will make you want to book a Broadway ticket ASAP.

Jersey Boys is currently celebrating its 10th year on Broadway, so it's an extra-special time for the cast to play a tribute to the musical. The musical, which recently had a big screen adaptation, tells the story of Franki Vallie and the Four Seasons as they climbed from unknown friends from Jersey to musical superstars. Naturally, the music is amazing, and the medley that the cast sang for CBS' Thanksgiving broadcast proved that.

The scene opened with Joseph Leo Bwarie, who plays Valli, singing a tune you may remember Heath Ledger's character serenading in 10 Things I Hate About You: "Can't Take My Eyes Off Of You." The larger ensemble cast then appears on the balcony above the stage and smoothly transitions into "Walk Like A Man."

That number is then followed by a dance-y "Who Loves You," which concludes the medley and brings out even more performers.

The Thanksgiving performance is a reminder of why Jersey Boys has remained on the Broadway stage for a decade. Though new musicals like Hamilton may get the most buzz, it's show-stopping performances like this one that remind us of why people still flock to see the story of the Four Seasons.