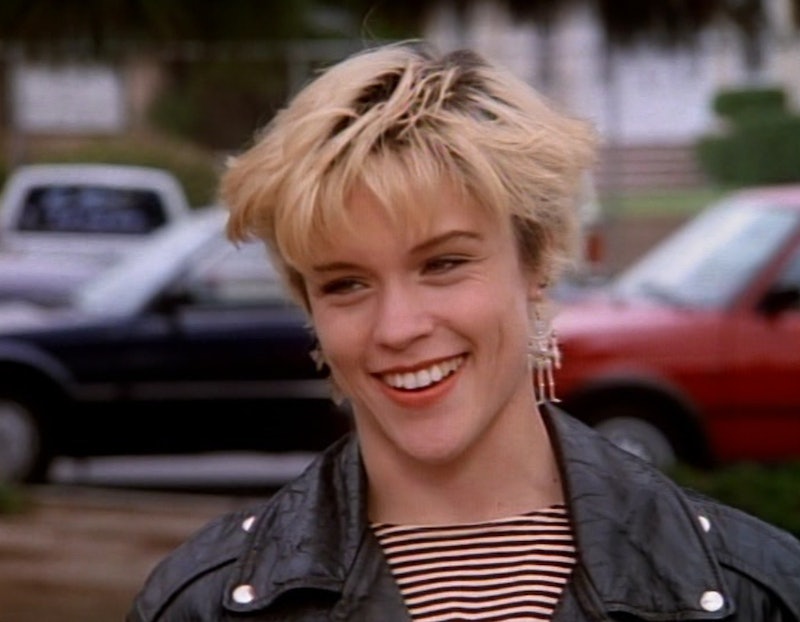 Memory is an amazing thing. Although I still struggle to remember my Twitter password, I've somehow managed to retain entire angst-ridden monologues from My So-Called Life word for word, and can reel off a bunch of unimportant (but pretty vital, who am I kidding) trivia about other TV shows from the '90s. As time goes by, and we become more and more spoiled with every brand-new TV offering to stream each weekend, it's easy to lose touch with the classics of our youth. This makes me sad, you guys.

Getting old sucks. Though you might not think much about struggling to remember anything from Saved By the Bell, apart from Zach freezing time or the crowd hooting whenever two characters got flirtatious or kissed (control yourselves, people!), in forgetting some amazing '90s shows, we also manage to forget some pretty spectacular characters in the process. And you know what? A lot of these characters meant a lot to me as a kid, and maybe they meant a lot to you, too. So let's give them the celebration that they well and truly deserve, eh? It's hurts to be forgotten about.

One of Brittany Murphy's first roles, Sarah was Tia and Tamara's best friend. She was also involved in a pretty heavy anti-smoking storyline in which she introduces the sisters to cigarettes and they all get busted for it. Murphy would go on to front an anti-smoking campaign following the storyline.

The only feminist on a show in which a man watched TV with a hand down the front of his pants, the ridiculously-named Marcy D'Arcy was the Bundys' long-suffering neighbor. I feel her pain.

How could we forget Mr. Treeger? The slightly vengeful landlord of the Friends apartment block might have seemed like a grump, but the amazing storyline in which he forces Joey Tribbiani to become his temporary dance practice partner is a beautiful and memorable one.

It's easy to discount Harmony as a meaningless minor character, but she had one hell of a journey in the show (and on into the spinoff, Angel). Starting off as one of Cordelia's group of mean friends, she gets turned into a vampire and eventually becomes Spike's poor neglected girlfriend while he fantasizes about Buffy the whole time. Then on Angel, she signed on as the title character's secretary.

Kim Parker was mean, but in the greatest way possible. While Moesha was fretting about boys, family life, or poetry, Kim would bring some essential perspective to everything, and make some adorably crude observations, too. Plus, she had the greatest giggle of any '90s TV show. I hope you remember it.

Coming during the zeitgeist of angsty female singer-songwriters hitting the charts, Corinna was a none-too-subtle parody of Alanis Morisette. A perky girlfriend of Eric, she goes on an embittered songwriting crusade after he dumps her. Eric was kind of a jerk.

7. Paulie (Clarissa Explains It All)

James Van Der Beek, everyone! I had a big old crush on Paulie at the time that this episode aired, but I'm still not sure why. Clarissa Darling was crazy for him, and for some reason assumed that dressing like a punk rocker from the mid-'80s would impress him. I mean, look at him. She got it so wrong. It's unbelievable.

The oft-referenced but never-seen Tino remains a complete mystery to My So-Called Life fans, which is exactly why he remains one of my favorite characters from the short-lived show.

Emily was crazy. Out of the endless stream of girlfriends whom Brandon took up with, Emily was one who left a distinct impression with him, becoming a recurring character despite the fact that she tried to torch a homecoming float and spiked Brandon's drink with drugs one night. Total wild child.

Drell famously left Aunt Hilda at the altar, and continued to torture the Spellman family for long after (Hilda got her revenge by standing him up at a date). Magician Penn Jillette was perfect for the role of the powerful witch.

I swear, nobody ever remembers Smart Guy when I try bringing it up in conversation. The young genius once starred with Destiny's Child, in an episode in which he tap dances during a music video for "No No No." It is incredible.

Of course Screech made himself a robot friend, and he was pretty adorable (Kevin, not Screech). I'd also like to think that Kevin will live a happy robot life all the way up to the robot uprising promised by the Terminator films, after which he'll go on an embittered rampage for having to put up with Screech's nonsense for so long.

See! So now you're all clued up. How could you have forgotten about all of these amazing '90s characters? May they remain in your hearts forever.