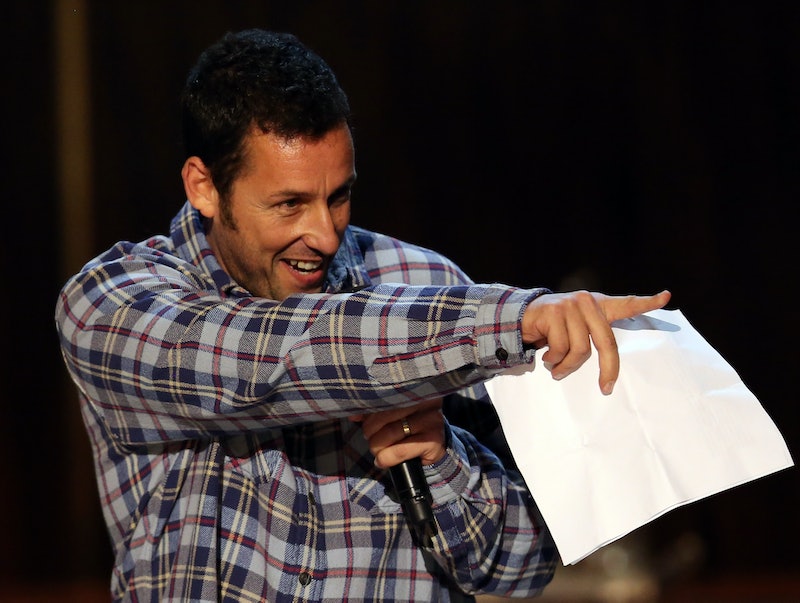 I have some excellent news for your childhood self: Adam Sandler just released a new version of his "Chanukah Song" for you to memorize and sing along with this holiday season. Wooo! I don't know about anyone's else's experience, but it seemed like that song was everybody's favorite thing back in the day, all the way back to middle school and elementary school, which makes sense, as Sandler first dropped the original version in 1994. He's updated it several times in the two decades — let me say that again, two decades — since, with Part II being recorded in 1999 for his album Stan and Judy's Kid, Part III coming out in 2002 on the Eight Crazy Nights soundtrack, and finally this most recent version being performed at the New York Comedy Festival in November 2015.

So what's different in this new version? Well, don't worry, it sticks to the same format, of naming celebrities you might not have realized were Jewish, but the references are topical AF. While many of the stars that Sandler name-drops in Part III are still famous, like Debra Messing, Lisa Kudrow, Paula Abdul, and Jack Black, others have faded a bit from our consciousness, like figure skater Sarah Hughes, for example, who won Olympic Gold in 2002, and was fresh on everyone's mind back then, but not so much now. But in contrast, all the references in the newly-released Part IV are hot off the presses: we've got people like Drake, Scarlet Johansson, Joseph Gordon-Levitt, and even Olaf and Elsa from Frozen . (The actors who voiced them, Josh Gad and Idina Menzel, not the animated characters themselves, duh.) See if you recognize everybody mentioned in the video below!

Pretty insane that we've now been listening to versions of this song for 20 years, right? Here's to 20 more — next year in Jerusalem!