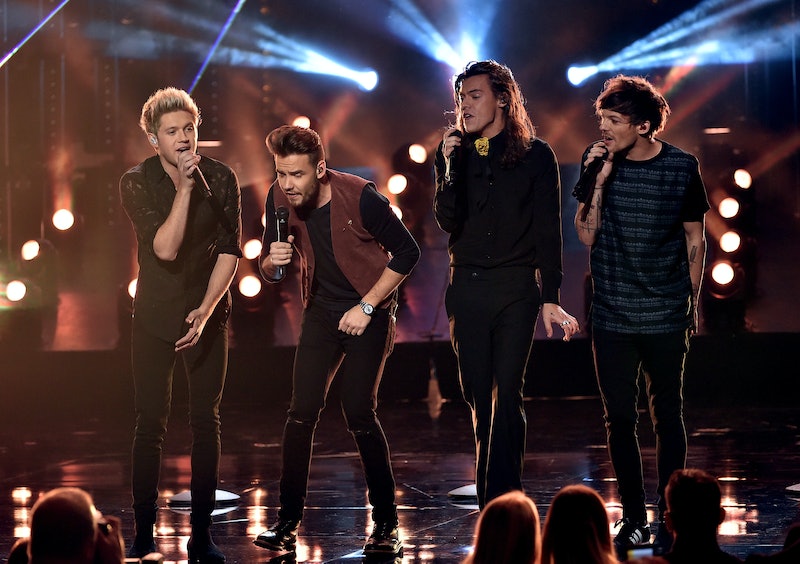 Just as I was thinking that I was up to date on all things One Direction, the band surprised me once again. This weekend, a video, called "The Lost Jams EP 1" was released on Twitter by one of the band's songwriters and producers, Julian Bunetta, who shared a glimpse of an unreleased One Direction song called "Hideaway." After watching the video, all I have to say is: Please, do not hide this song from us for much longer, boys!

The gritty YouTube video features footage of 1D members (and devoted songwriters) Liam Payne, Louis Tomlinson, songwriter/music producer Julian Bunetta, and singer/songwriter Jamie Scott, who joined the boys on a few "Where We Are" tour dates last year. The group is inside a room writing and recording snippets of "Hideaway." Why is this such a big deal? Because with those four in a room, there is no way that "Hideaway" wouldn't be a sure-fire hit, and yet the song has remained unreleased.

You might be unfamiliar with Julian Buntta and Jamie Scott's names, but you are definitely not a stranger to their work. They've teamed up with the "Drag Me Down" singers to write some of their biggest hits yet, like "Story of My LIfe," "Steal My Girl," and "Best Song Ever" to name a few.

The video features Payne and Tomlinson collaborating with the two writers, trying to come up with lyrics and harmonies for the instrumental. Payne mentions that he is "feeling something fun," and they proceed to sing a few lines that make you want to dance immediately. The soft drums and beachy guitar rifs are infectious, and it's clear that the song s full of good vibes. From the sound of it, the tune has an infectious beat and melody that we need in our lives.

Not only did this video make me wish that I could sit in on a writing and recording session with the members of One Direction too, but it made me dying to hear this "Hideaway" song that they are beautifully crafting in the clip. While we were blessed with 17 killer tracks on Made in the A.M. , I'm sure that no one would complain if the band decided to drop "Hideaway" as an extra track. After all, there is no such thing as too many One Direction songs, and with their hiatus afoot we need as much from them as we can get!