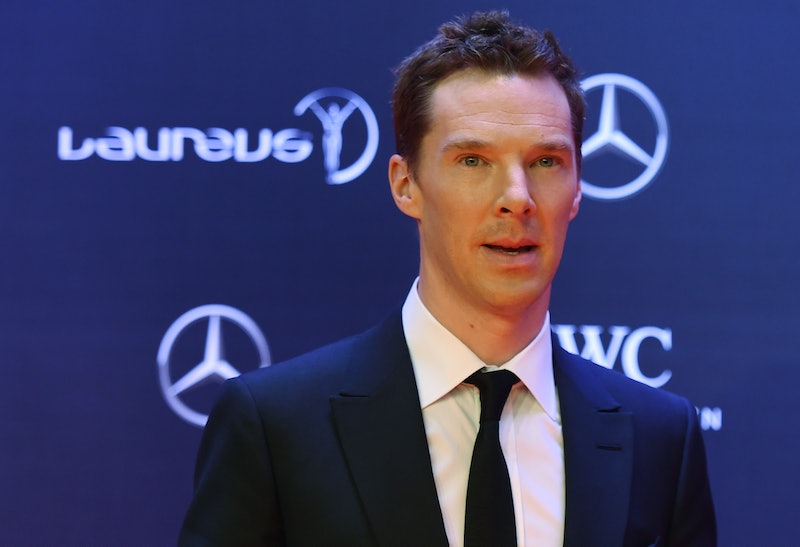 Something truly magical happened on the most recent episode of The Graham Norton Show: Benedict Cumberbatch impersonated otters. Now, I will grant you that may very well be the weirdest sentence I've ever typed, but there is actually some precedent involved. Way back when he first became famous, some fans on Tumblr decided Cumberbatch looked like an otter. This is in no way insulting because everyone knows the otter is cutest of the animals. Sadly, the Cumberbatch otter meme did not produce nearly enough Benedict Cumberotters. Enter Graham Norton.

Cumberbatch was on the show alongside Johnny Depp to promote their gangster film Black Mass (the movie premiered stateside earlier this year, but it just hit U.K. theaters), and Norton took the opportunity to have Cumberbatch recreate even more otter photos. As an Academy Award Nominee, Cumberbatch has proven he can do anything including giving flawless otter face. He captured the true essence of a boxing otter and the unrestrained glee of an otter caught in an otter sandwich (proving Depp and Graham may also have careers as otter impersonators in their futures). He even posed with what I am assuming is the world's largest teddy bear — which he beat up before asking, "Who's a cute otter now?"

You are, Cumberbatch! In fact, he's such a cute otter, I think he needs to keep the pics coming. Here are seven more otters in desperate need of a Cumberbatch reenactment.

This one could be Cumberbatch's most challenging otter yet. How can he capture the perfect combination of worry and contemplation? What will he use for a prop? The world needs to know.

For this otter, Cumberbatch will once again have to reach deep down and find his inner Khan because this otter is clearly plotting world domination.

Cumberbatch will need a friend to assist with this reenactment. These happy otters are raising the roof together, so Cumberbatch needs his partner in solving crimes. Someone call Martin Freeman! (Or maybe even Tom Hiddleston.)

Since Cumberbatch has yet to give the world a holiday movie, he can make it up to everyone by imitating this otter who is psyched for Halloween. The real draw here is seeing Cumberbatch with a trick or treat Jack-o'-lantern pail, of course.

This otter is ready to star in a romantic comedy that will leave you feeling all warm and fuzzy. Cumberbatch will need to get in touch with his gooey side for this role, and I think his fans will appreciate his commitment if he also hugs a giant heart.

This is the meme the world needs.

This otter is an international man who knows how to party. Loosen up your tie, Cumberbatch, this otter could earn you the role of the next James Bond.

The fun with otters is just beginning. Check out Cumberbatch's amazing performances on The Graham Norton Show in the video below.