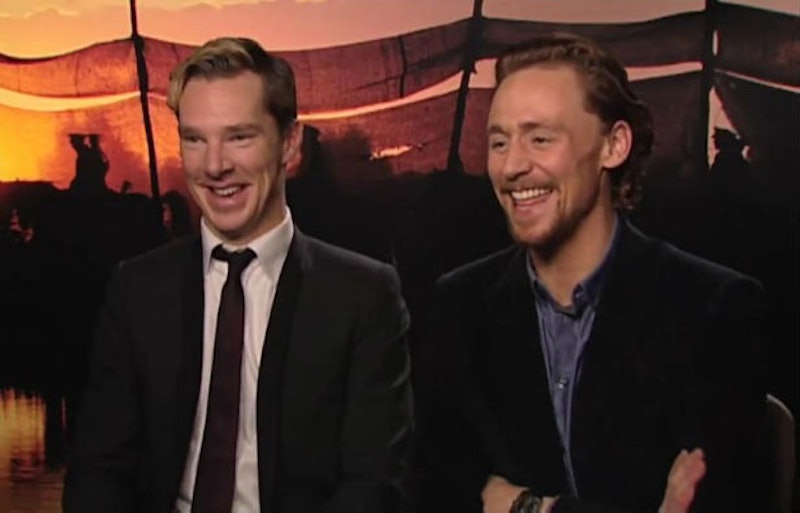 What's more beautiful than two supportive male best friends? Well, two really attractive male best friends who also happen to be English and extremely talented. Yup, that's about as awesome as a best friend coupling as you can get and Tom Hiddleston and Benedict Cumberbatch have all of those things. Actually, I can go on and on about this lovely pair, and as a Bustle reader, I'm sure you've noticed we kind of have a massive crush on both of them. What's not to love? I took it upon myself to answer this question in the best way I could, by recounting the cutest Tom Hiddleston and Benedict Cumberbatch friendship moments over the past four years, all while giving me complete license to gush at their cuteness unabashedly.

Since meeting on the set of the epic film War Horse in 2010, they began a friendship that spawned one of the largest and fervid fan bases of recent years. It is not an easy competition in the Internet fangirl world, but the combined charm and beauty of these two men made it look so easy. Earlier this month, Cumberbatch was name Tumblr's "most reblogged actor of 2014" for the second year in a row, and I venture to say that his boy Hiddleston was not too far behind. There is a treasure trove of beautiful friendship moments these two have shared with the world and here are just a few to set your hearts ablaze once more.

When Hiddleston gushed about his BFF to Toronto's The Star

“He’s one of my best friends. It’s as simple as that. It’s funny how people have framed us together in a way... He’s just a great, amazing, brilliant actor.”

This Entire Interview with Empire

They are almost flirting and giggling with each other throughout this whole thing and the interviewer even says she can "feel the bromance." Cumberbatch confesses his love for his BFF, saying, “He’s an action man. He’s got the looks. He’s an incredibly talented actor, and he’s one of the finest of our generation. And a friend.” I need a cold shower.

When Tom Nominated Benedict for the ALS Ice Bucket Challenge:

They are socially aware BFFs who stand up for great causes, and Hiddleston gave us a chance to enjoy a soaking wet Benedict Cumberbatch — what a great friend! OK, I'll end my creep factor now.

When will the madness ever stop? How can they continue to be perfect in every way? In the words of Youtube user Madison D., "Tom's voice coming out of that mouth has pulled me into a vortex from which there is no escape." I think the world feels you, Madison.

When They Both Sang "Pure Imagination"

Oh yeah, did I mention they both can carry a tune and on separate occasions each sang "Pure Imagination" from Willy Wonka and the Chocolate Factory? And, seemingly, not at all because the other one had done it. I choose to believe it's because they are both fans of the film and they've totally watched it together.

When They Joke Around With Each Other

Because... Do I need a reason? SWOON.

Just because it's a fan-made mashup of them dancing to LMFAO's "Sexy And I Know It," does not mean that they have not danced together, which I whole-heartedly believe has happened because they are both quite light on their feet. But, in my opinion, Hiddleston has just the right amount of hip thrusting to put his skills over the edge. Guess I'll just have to keep watching to decide...

That Time They Shared That They Were Feminists

ELLE UK recently launched their #ElleFeminism campaign and both Hiddleston and Cumberbatch stood proud in their stance for gender equality. What's hotter than two talented men standing up for the ladies? Very little, tbh.

More like this
Jennifer Coolidge Slid Into Ariana Grande’s DMs In The Most Iconic Way
By El Hunt
Why We Love Investigating Friendship Breakups
By Carolyn Steber
'Bling Empire: New York’ Star Dorothy Wang Wants To Try 'The Simple Life'
By Alyssa Lapid
You’ve Got 'Love Island’s Farmer Will All Wrong
By Jack Orenstein
Get Even More From Bustle — Sign Up For The Newsletter
From hair trends to relationship advice, our daily newsletter has everything you need to sound like a person who’s on TikTok, even if you aren’t.