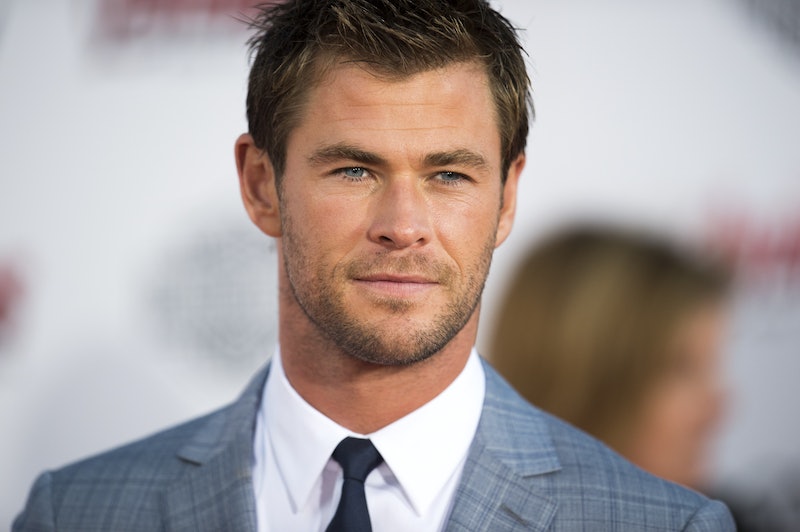 Thor isn't the only one worthy of Mjolnir. In news that will make your heart melt and your eyes get all leaky, Chris Hemsworth paid off his parents' debts. The heroic actor didn't advertise his good deed either, it was his little brother Liam Hemsworth who spilled the story to Independent (and, according to the interviewer, Liam got teary talking about it — proud little brothers are the best). Just so you know, Chris' act of gratitude and kindness toward his parents is definitely going to make you love the big-hearted actor even more than you already do.

Liam told the Independent Chris called their father one day and told him to look at his bank account. "He [his father] called my brother Chris back and said: 'I don’t know how to feel. Since I left home I have had debts and I thought I’d be paying them off until I died and have this weight hanging over me, and now to have them completely cleared.' They are so happy now and able to spend more time with us. I would love to be able to do something for my parents like that."

It is no wonder Chris and his brothers turned out to be such generous men; they had excellent examples in their parents. Growing up, the Hemsworths' parents were advocates for children who had gone through trauma. That is why their sons are big supporters of the Australian Childhood Foundation, a charity devoted to giving children a bright future. Both Chris and Liam have played heroes on the big screen, but their real life actions are more heroic than anything Thor or Gale have ever done.

There is so much talk about how money changes celebrities, but Chris is proof that it can also offer people the opportunity to pay it forward with the people who matter most. As amazing as it is that Chris donates to charities, this story is sure to strike a chord with anyone who has ever dreamed of giving back to their parents in such a major way. Chris has worked hard building his career and knowing that when he got to a point where he could wipe the slate clean for his parents he did so is beyond touching.

All of Hemsworths' sons are wonderful people, and I'm sure their parents are responsible for them being such amazing human beings. If you weren't a fan of Chris before, then I bet you are now. Thor himself would have a good cry over Chris' heartwarming gesture. If they handed out awards for best son ever, I know Chris would be at the top of the list this year.

Now, can someone please pass me a tissue? It appears to be raining on my face.