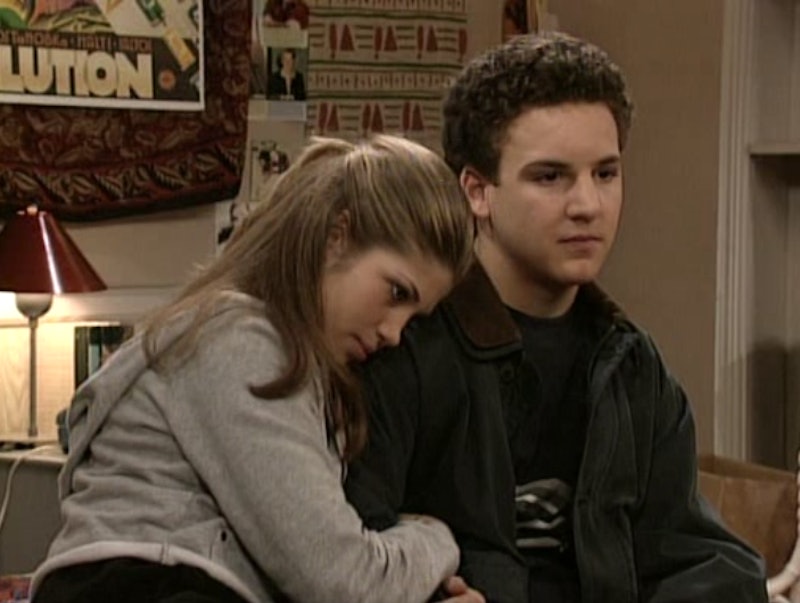 Now that Disney Channel has officially renewed Girl Meets World for Season 3, it's time to start thinking about high school. Cory, Topanga, and Shawn's high school years were nothing if not eventful. Breakups, first road trips, and even flirtation with joining a cult were all part of the experience for the original trio. I cannot wait to see what kind of trouble Riley, Maya, Lucas, and Farkle get into as they take the next step toward growing up, and part of me hopes Girl Meets World will look to its predecessor for inspiration.

The Story: Cory inadvertently incites his classmates into vandalizing Mr. Feeny's house and the school after protesting that Mr. Feeny scheduled too many finals at once. Mr. Feeny nearly retires due to the incident, but seeing the positive effect he has had on Shawn in particular (he cites the Bill of Rights in hopes of stopping his classmates from getting violent), he reconsiders.

Why It Would Work On GMW: Cory followed in Mr. Feeny's footsteps, and while his lessons are often abstract, it would be interesting to see him encounter dissent from his students. This could be a huge episode for Cory, and while it doesn't have to follow the vandalism route, any push back from the kids would certainly be emotional for him.

The Story: Cory tells Topanga he loves her and she gets so freaked out she breaks up with him.

Why It Would Work On GMW: Because this is a story built for Maya Hart. Her first romantic relationship is bound to be rocky given Maya's feelings phobia, and the first time someone tells her they love her in a romantic way is going to be a huge deal.

The Story: Cory gets his driver's license, and Alan wants nothing more than to take a ride with his son. Cory wants to be with his friends and leaves his own birthday party to go on an impromptu road trip. When he ends up getting a speeding ticket, Alan has to bail him out.

Why It Would Work On GMW: Riley and Cory stories are some of the show's strongest stories, and Cory is already protective of his time with his daughter. Seeing her opt to go through a major milestone without him would be a huge deal. It might be even more interesting to flip the script and have the conflict arise between Riley and Topanga though.

The Story: Topanga has to move to Pittsburgh, and everything hurts.

Why It Would Work On GMW: Having a friend move away is one of the hardest parts of growing up. Imagine Riley learning Maya and her mom had to move, or Lucas going back to Texas. It's one of those inevitable moments nearly everyone has to experience at some point.

The Story: Cory starts going through puberty, but Eric convinces him he is turning into a werewolf.

Why It Would Work On GMW: Obviously, the werewolf silliness has to go, but I would love to see the subject of puberty tackled head on. Is Disney brave enough to let Riley or Maya discuss periods, confusing hormones, or the insecurity that comes with acne? Time will tell, but for a tween show it is important ground to cover.

The Story: Jack and Shawn meet for the first time, and the road to accepting they are brothers isn't an easy one.

Why It Would Work On GMW: Maya knows Kermit has other kids. While she may not want a relationship with her father, she might want to meet her siblings one day. Shawn could help her through the process and help her figure out how to make room in her heart for the siblings her father decided to raise.

The Story: Cory and Shawn agree to go to the same college, but when Shawn finds out Cory is interviewing at other schools they go through a temporary friend breakup.

Why It Would Work On GMW: High school is rough. There are going to be more students, more cliques, and distractions that could come between Maya and Riley. There's no need to wait until college to explore the girls exploring their differences.

The Story: A class assignment leads to scandal when Cory and Topanga fall asleep overnight at school. As rumors spread, Topanga deals with sexism and shunning while Cory enjoys increased status.

Why It Would Work On GMW: Rumors are even more powerful now thanks to the internet, and there is an excellent lesson on feminism tucked away in the way teen boys and teen girls are treated when people talk about how far they have went, sexually speaking.

Girl Meets World is sure to tackle social and family topics I haven't even thought of as the series progresses, but I hope they have time to revisit some of the classics too.