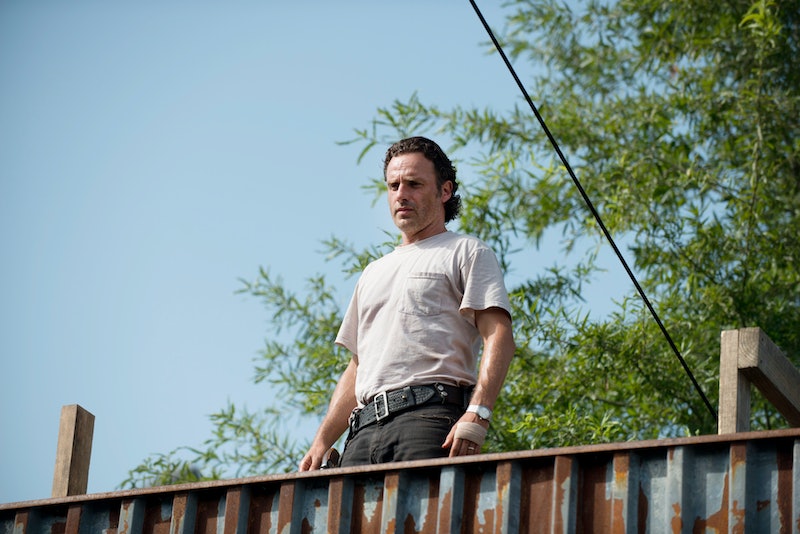 I've never been a big fan of the whole midseason finale scheme that The Walking Dead has enacted since Season 2, but it does lead to double the cliffhangers in each zombie-filled season. The Season 6 midseason finale is on Sunday, Nov. 29, so when will The Walking Dead come back for the rest of Season 6? With the walls of Alexandria falling down in the previous episode and the fate of my favorite pizza delivery guy-turned ultimate zombie apocalypse survivor revealed, the Season 6 midseason finale has a lot of fodder to toy with fans' emotions. And if this midseason finale is anything like previous ones, quite a few characters could die, so waiting for the second half of the season will be as painful as getting bitten by a walker. (Errr, OK it's probably not that bad.)

The Walking Dead has already been renewed for a Season 7, which is at least some consolation when the show goes on hiatus for the winter. But the showrunners and AMC haven't given an official date for when the second half of Season 6 will premiere. Since the show usually follows a pattern when it comes to premiere dates though, some sleuthing into past seasons can give The Walking Dead fans a relatively good idea on when to expect the show to return after a gut-wrenching midseason finale.

As previously mentioned, Season 2 was the first season to have the midseason break (Season 1 of The Walking Dead was only six episodes long). But that gives me four midseason premiere dates — as reported by TV Guide — to make my educated guess on when Season 6 will return:

*Note that the year 2012 was a leap year, thus why there is a two-day difference between the premiere dates of Seasons 2 and 3.

Keeping with those dates, the Season 6 midseason premiere should take place on Sunday, Feb. 7. Perhaps the show could push back a week to Sunday, Feb. 14 since Feb. 7 is almost a full week ahead of when the show started its midseason premieres, but I wouldn't imagine the second half of Season 6 premiering any later than Feb. 14. Plus, who wouldn't love to celebrate Valentine's Day with a blood-covered Rick Grimes?

After "Start to Finish" premieres on Nov. 29, your calendar can be free on Sundays for a couple months. Come February though, your Sunday nights will go back to being occupied by the characters of The Walking Dead who managed to survive the midseason finale.