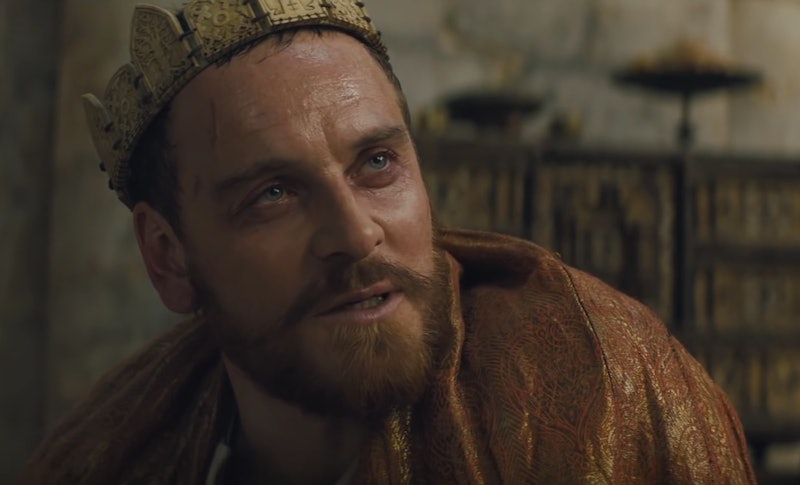 Michael Fassbender starring as the titular king in a big screen adaptation of Shakespeare's Macbeth sounds like an inevitability. Fassbender, recently nominated for an Oscar for his supporting role in 12 Years a Slave, has become one of the most sought after actors of his generation, starring in both complex dramas like Shame and huge Hollywood blockbusters like X-Men: Days of Future Past. Acting ability aside, just one look at his imposing good looks and it's clear — Fassbender as Macbeth is perfect casting. Which is why it's so strange to find out that te star has never actually performed in a Shakespeare play or film adaptation before. So just how did Michael Fassbender become Macbeth, and what took so long to make it happen?

The idea of Fassbender playing Macbeth is, not surprisingly, what helped make Macbeth a reality for director Justin Kurzel. Fassbender brought the Macbeth script to Kurzel after seeing his film The Snowtown, and inspiration struck. "It was the vision of Michael as Macbeth that first intrigued me," Kurzel said in an interview with List Film. As for Fassbender, he wasn't looking to take on a classic Shakespeare play when he was approached by Macbeth producer Iain Canning. But, once he committed to the part and brought Kurzel on board to direct, Fassbender realized it was a project he couldn't walk away from. "I knew right away that I believed in him [Kurzel] and believed in his vision. And I could feel that excitement of going on a journey together, never knowing if it was going to work or not," Fassbender recounted to EW.

Once Fassbender and Kurzel were both attached to the project, the preparation for Fassbender to play Macbeth began. Kurzel and Fassbender set out to re-interpret Macbeth as a man suffering from PTSD, as opposed to just another deranged and power-hungry King. "When Justin said it, it was so obvious. Because it's actually in the play, in the banquet sequences — Lady Macbeth tells everyone to relax because she's seen this behavior before, he's prone to fits. He's seeing Banquo and the witches in the same way that soldiers coming back from Iraq can be walking through Clapham Junction and the next thing they're in downtown Basra," Fassbender explained to the Telegraph.

While Kurzel actively avoided watching the celebrated adaptations of Macbeth from the Orson Welles, Roman Polanski and Akira Kurosawa, Fassbender binged on Macbeth films as a way to prepare himself to play the role. "It's information that's out there, and it can only lend something to what I'm doing," Fassbender told the Telegraph.

Of course, the main challenge when preparing to play Macbeth was learning the Shakespearean dialogue to be able to deliver it as naturally as possible. Fassbender had never performed in a Shakespeare play outside of the occasional scene work in drama school before tackling Macbeth, and, as any high school student can tell you, Shakespeare dialogue is not easy to understand, let alone perform. Instead of focusing on the traditional iambic pentameter rhythms of Shakespeare, Fassbender focused on understanding the intent behind the words when learning the pages of dialogue. "I never approached it that way. I don't even know if I got that right. I'm a little dyslexic with the iambic pentameter. I just always tried to make sense of it, and hoped the rhythm would follow," the actor revealed in an interview with Variety.

Whatever he did, it seems he did it right. Fassbender's work in Macbeth just earned him his fifth British Independent Film Award nomination, and the film is hitting theaters just in time for Oscar season on Dec. 4.