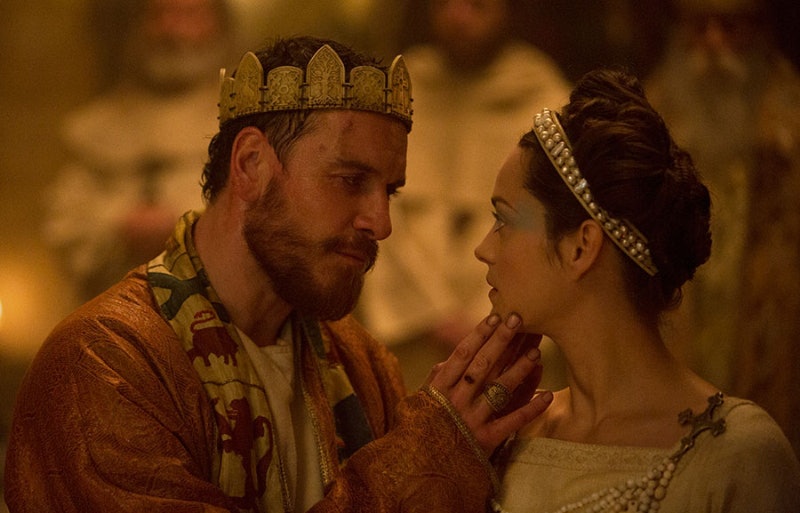 Pretty much everyone knows the plot of Shakespeare's Macbeth . (If you don't, I'm not going to explain it to you — that's what Sparknotes are for.) Not only did we all read it for school at some point, but there have been literally thousands of interpretations of the script since its publication in 1606, not only on stage and in movies, but also opera, paintings, and books. The most famous feature film adaptation of the Scottish play is probably the 1971 version directed by Roman Polanski; the most recent is a 2006 modern retelling starring Sam Worthington. Director Justin Kurzel is the latest to tackle the Bard's bloody tragedy, in a version starring Michael Fassbender and Marion Cotillard as Lord and Lady Macbeth.

Kurzel made a splash with his 2011 feature film debut, an Australian drama called Snowtown; after Macbeth, he will helm the highly-anticipated adaptation of Assassin's Creed, also starring Academy Award nominee Fassbender. Academy Award winner Cotillard stepped in to the coveted role of Macbeth's scheming wife when Natalie Portman dropped out to focus on her directorial debut, A Tale Of Love And Darkness. Now, we have our first glimpse of the two immensely talented actors in their roles, thanks to a brief teaser.

The footage is only 23 seconds long, but it actually tells us a lot about what to expect from this latest iteration of the classic (and cursed) tale. Like...

It's Going To Be Beautiful

The teaser opens with this shot of Fassbender's Macbeth swaying unsettlingly in the middle an expansive, gorgeously-lit room. It's an evocative and haunting image that bodes well for Kurzel's visual acumen.

There Are A Lot Of Great Exteriors

It's refreshing when a film doesn't confine itself to dimly-lit interiors that are obviously constructed on studio lots. Almost the entirety of the footage takes place outdoors, with plenty of natural lighting and sweeping landscapes.

The only thing we hear Macbeth say (or shout, rather) in the footage is this line from a speech in Act 5, Scene 3: "The spirits that know all mortal consequences have pronounced me thus: 'Fear not, Macbeth. No man that’s born of woman shall e'er have power upon thee.'"

Macbeth Is Taking A Page From Melisandre's Book

On the page, Macbeth usually resorts to the tried-and-true method of stabbing people with sharp objects. But here, we glimpse several people tied to stakes and presumably being burnt alive. Clearly, Fassbender's Thane of Glamis has been hanging out with Game Of Thrones' Red Priestess.

It's Not For The Faint Of Heart

Macbeth is a bloody tale, but Kurzel's adaptation appears to be pulling no punches when it comes to the violence: two of those people tied to stakes are revealed to be young children.

Cotillard gets the final word in the teaser, whispering a famous line from Act 5, Scene 3: "What's done cannot be undone." Her tender portrayal and the white shroud wrapped around her head bring to mind more Virgin Mary than Lady Macbeth. To wit:

It will be interesting to see if Cotillard can make this infamous master manipulator into a sympathetic character.

Now check out the teaser... and then wash your hands, put on your nightgown, look not so pale. Banquo's buried; he cannot come out on's grave.

More like this
Sparks Fly Fast & Furious In 'Honey & Spice'
By Bolu Babalola
Yes, Joseph Quinn Is Actually Playing The Guitar In This Epic 'Stranger Things' Scene
By Alyssa Lapid
Florence Pugh & Zoe Kazan Have Teamed Up For A Major New Netflix Series
By Rachel Mantock
At 14, Jenny Han Wrote Rom-Coms About Her Friends & Fan Mail To Leo DiCaprio
By Alyssa Lapid
Get Even More From Bustle — Sign Up For The Newsletter