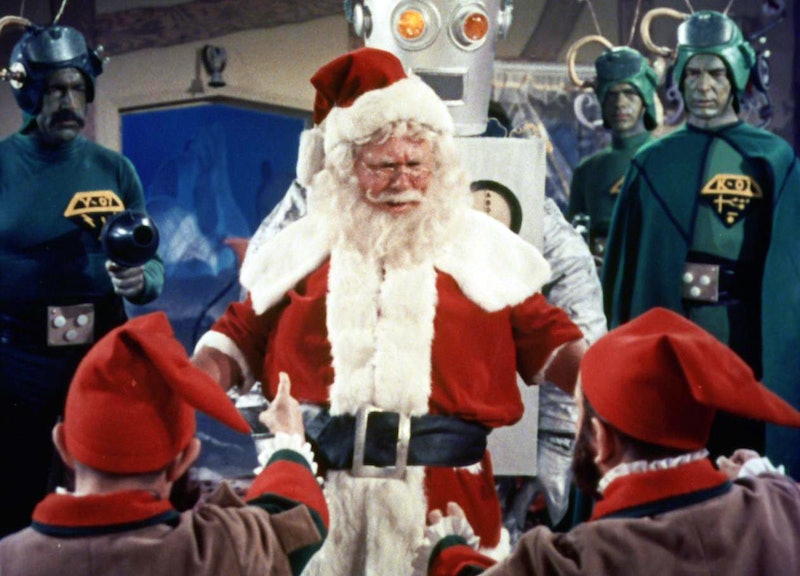 There are so many timeless holiday movies out there that one would have a hard time watching all of them every December. There are classics like It's A Wonderful Life, modern favorites like Elf, and even some weird ones like Gremlins . And then there are some holiday movies you won't even believe exist, films that are so strange, so bizarre, that it boggles the mind as to how they were ever even made in the first place. And I'm not talking about pedestrian weirdness like a grumpy department store Santa like in Bad Santa, I'm talking about the real Santa battling space aliens. I'm not referring to an animated Adam Sandler bungling his way through Hanukkah in Eight Crazy Nights, I'm thinking of Adam Goldberg as a Jewish superhero out to save the Festival of Lights. A green creature who hates Christmas like in How the Grinch Stole Christmas isn't nearly as weird as Merlin helping Santa fight the devil.

Yes, I'm talking about the holiday movies that you probably haven't heard of, and if you have, you're convinced you dreamed up their existence. These holiday movies aren't just out there, they defy all reason. So grab some eggnog, but hold off on adding any booze to it; these films are trippy enough as is. Here are eight holiday movies you won't believe exist.

This Mexican film is about as weird as a movie can get. It takes place on Christmas Eve, where Santa is prepping for his annual trip around the world from his castle in space. You know, where Santa lives. But the devil has other plans, and he sends a demon to kill Santa and turn kids everywhere evil. But Santa survives with the help of his assistant, Merlin the wizard. And now you know the story of the first Christmas.

Santa takes another trip to weirdsville, this time in Florida, naturally. His sleigh is stuck in the sand on a beach, and some local kids show up to help him get it out. To inspire them, Santa tells them the story of Thumbelina while Tom Sawyer and Huck Finn look on, and a good chunk of the movie is literally just an extended clip from a different movie about Thumbelina. In the end, when all hope appears lost, the kids show up in a fire engine driven by the Ice Cream Bunny, whatever that is, and he drives Santa to the North Pole. I'm assuming he was able to run red lights because of the fire truck, so they probably made great time.

OK, so there's a lot of weird movies about Santa. This one, considered one of the worst films ever made, tells the classic tale of Santa and two kids being kidnapped by Martians in order to teach the ultra-serious Martian children how to have more fun. Weirdly enough, the movie has the distinction of marking the first on screen appearance of Mrs. Claus, so if it didn't exist, the plot of The Santa Clause 2 wouldn't make much sense.

Known for its wildly creative title, this spin on St. Nick features Hulk Hogan as a jacked con man who believes himself to be Santa Claus while suffering from amnesia. He then has to do battle with a mad scientist who wants to destroy an orphanage in order to access magical crystals that are buried underneath it. Say it with me: wut?!

Adam Goldberg stars as the titular Jewish crimefighter, who has to prevent Santa's evil son Damian from destroying Hannukah and Kwanzaa and making everyone celebrate Christmas instead. Lots of ass kicking ensues, as did protests from both Jews and Christians in real life, some of whom felt their respective portrayals in the film were less than flattering.

This well-reviewed and inventive Finnish story gives Santa a seriously creepy origin story. Turns out Kris Kringle is evil, lives in a grave, and commands hundreds of lookalikes to do his bidding on Earth, which includes slaughtering scores of reindeer. And you thought Krampus was scary.

Most holiday horror movies have a supernatural element to them, but not this one. Nope. Here, young Harry sees his father, dressed as Santa Claus, have sex with his mother. The scene scarred him for life, and 30 years later he believes himself to be the real Santa and starts murdering people who are on his naughty list. So that's what happened to that kid who sang "I Saw Mommy Kissing Santa Claus".

Possibly the strangest of the bunch, this film actually begins on Halloween, where a boy rescues a witch's cat from a tree. The witch tells him how to grow a magical Christmas tree that will grant him three wishes. The boy grows the tree, and uses it to kidnap Santa Claus so he can have him all to himself. Then he feels bad and releases Santa. Then he wakes up. It was all a dream. I'm pretty sure this movie is just an actual dream someone had that they decided to turn into a movie verbatim, because it makes no sense.

This list is proof that when it comes to holiday movies, there really are no rules. Unlike your office holiday party, which most definitely has rules, so go easy on the rum balls this year, OK?