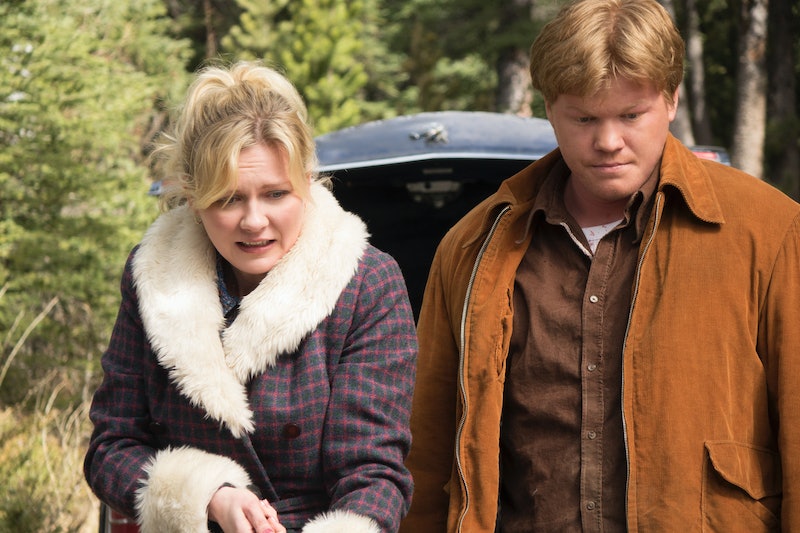 For as long as we've known her, Peggy Blumquist has been pursuing the dream of "self-actualization." Persuaded by her boss, Constance Heck (whose own motivations were far from pure), the naïve beautician of FX's Fargo yearned to break out of her humdrum suburban midwestern life and become her best self. To date, a seminar with the cloying title "Life Springs" has been the Holy Grail of Peggy's quest — but in this Monday's episode, "Loplop," Peggy Blumquist finally came into her own without ever stepping foot in a single seminar: she "self-actualized" by indulging in a spot of torture.

There have been hints before now that Peggy had a darker side that was just waiting to break free of its prim and proper exterior. It takes a special kind of psychopath to drive home with a "dead" body sticking out of the windshield of your car, only to park it in the garage and proceed to cook dinner as though nothing had happened. But when Peggy seemed more delighted than horrified at her bloody predicament — and when the extent of her hoarding tendencies were revealed — it started to become clear that she was at least one fry short of a Happy Meal.

Two weeks ago, the episode ended with Peggy zapping Dodd Gerhardt into submission in her basement with his own cattle prod. Last week, we didn't see Peggy or Dodd at all as the hour focused on the rest of the Gerhardt family reeling from assaults on other fronts. But this week rewinds the clock to show us what Peggy and Ed were up to during that time... and it wasn't pretty.

After shoving an unconscious Dodd into the trunk of his own car, the Blumquists drove to Sioux Falls, where Ed's family owned a secluded cabin. They tied their hostage up in the middle of the one-room shack before Ed proceeded to the nearest general store to call the Gerhardts to offer Dodd up for ransom. The butcher wasn't gone long before things between Peggy and Dodd went south. It's no surprise these two characters didn't hit it off: between her feminist ideals and his misogynistic attitude, they were a powder keg waiting to explode. Too bad for Dodd, then, that he was all tied up, since Peggy was the one who did all the exploding.

When Dodd talked back to her, Peggy casually plucked a nasty-looking steak knife from a kitchen drawer and plunged it purposefully into his chest. When he swore at her in pain, she jabbed it just as nonchalantly into the other side. Everything that followed for Dodd was an exercise in mental torture, as he was forced to listen to Peggy's prattle, accept her spoon-feeding, and piss into a kettle in front of her, all with an obliging smile on his usually scowling face.

Eventually, Dodd was able to work himself free of his restraints while Peggy's attention was consumed by the television. The humiliated Gerhardt knocked her out and strung up Ed in a noose — but his disparagement of women unsurprisingly turned out to be his undoing; even as he saw Peggy struggle her way off the floor, he didn't consider her to be a threat and foolishly turned his back on her. This time, it was Dodd's foot that met Peggy's steak knife. While he was incapacitated, she grabbed a poker gave him a nasty crack. Judging by his complaint that he couldn't feel his legs, she probably broke his neck and paralyzed him from the waist down.

Mike Milligan likely won't be too happy when he finds out that the Gerhardt hostage promised to him by Ed has been damaged beyond repair. But I must admit that it was beyond satisfying to see the sexist thug taken down so handily by a woman. Of course, this satisfaction was tempered by the disturbing sight of Peggy reaching previously untapped depths of her murderous psychosis. How much lower will Peggy go in the two episodes remaining? And is there any chance she'll make it out of Season 2 alive? Or will she wind up as just another part of the body count of the impending Sioux Falls Massacre?

More like this
Brittany Snow & Tyler Stanaland Are Separating After 'Selling The OC'
By Grace Wehniainen and Radhika Menon
This House of the Dragon Character Will Create Another Scandal For Rhaenyra
By Kadin Burnett
Nicola Coughlan Shared A Lady Whistledown Excerpt From ‘Bridgerton’ Season 3
By Grace Wehniainen, Alyssa Lapid and Sam Ramsden
Devi Is Going To Meet A “Smoldering Bad Boy” In ‘Never Have I Ever’ Season 4
By Jack Irvin and Gabrielle Bondi
Get Even More From Bustle — Sign Up For The Newsletter