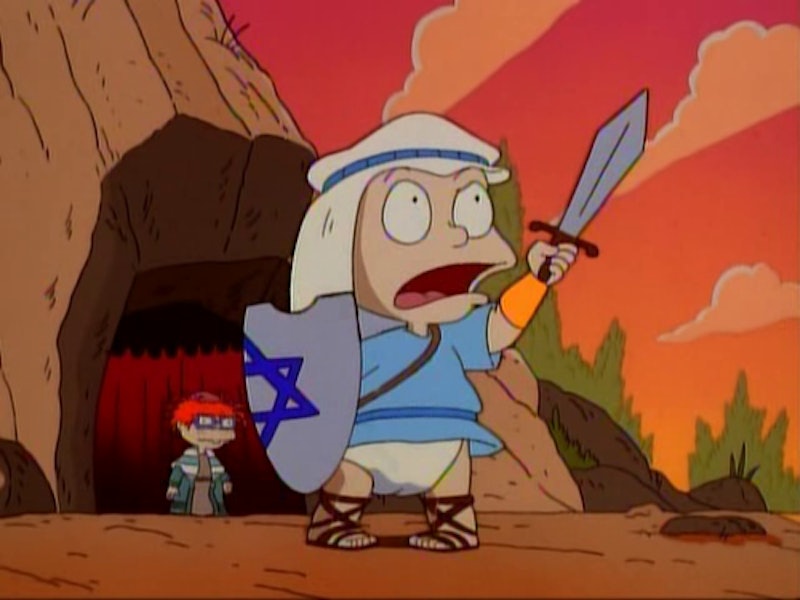 Just like there's no better way to celebrate Christmas than by decorating your tree, baking Santa shaped cookies, and watching holiday movies/specials with your loved ones, there's no better way to celebrate Hanukkah than by dusting off your menorah, making delicious latkes, and watching holiday movies/specials with your loved ones. But surprisingly — and sadly — there aren't a lot of films and TV specials that revolve around the great story and miracle of Hanukkah. You want a Christmas film? Great! Pick from a list of approximately three million. Christmas TV special? There's roughly 2 million of those (give or take). But Hanukkah? Your options are more limited. Even though I've just made the situation sound pretty dire, it's not a total bust. The Hanukkah movies and TV shows are out there; you just have to search a little harder.

Thankfully, I've done the work for you! Consider it my first gift. You're well on your way toward enjoying what the world has to offer you in terms of Hanukkah entertainment. Here's a list of eight (obviously!) films and TV episodes that either celebrate or honor Hanukkah in some way. Feel free to watch them at all once, or spread them out over the holiday.

In 1994, Adam Sandler released the now famous "Chanukah Song," and became the unofficial/official comedian spokesman for the holiday. Then, in 2002, he released the animated film Eight Crazy Nights. Despite its look, the film isn't all that family friendly, but at least it gets the holiday spirit ball rolling.

The story of Mordechai Jefferson Carver, played by Adam Goldberg, who has one very important mission: to save Hanukkah! It's a parody on the Blaxploitation films of the '70s, so expect some pretty over the top comedy.

This animated film following a Jewish mouse and his immigration to America is a classic. Though Hanukkah isn't the subject of the entire film, it serves a purpose, as Fievel (the mouse) receives his iconic blue hat as a Hanukkah gift from his father.

In the sequel for Meet the Fockers, the two families celebrate Christmas and Hanukkah together. Turns out Jack Byrnes is 1/23 Israeli? Who knew?

Though intended for a young audience, this is a TV special that everyone can enjoy. The Rugrats retell the history of Hanukkah with a fun and (really) adorable twist.

This episode is technically a blend of Christmas and Hanukkah (hence the name), but is definitely worth the watch because it totally understands the traditions of both holidays.

Stream The Best Chrismukkah Ever here.

7. Even Stevens: "Heck of a Hanukkah"

Like the Cohens, the Stevens family is of mixed religious heritage. This episode is basically a reimagined version of It's A Wonderful Life but with some Hanukkah woven in. So, in other words, a total win-win.

8. Friends: "The One With The Holiday Armadillo"

In an effort to teach Ben about his Jewish heritage, Ross dresses up as an Armadillo (they were out of Santa costumes, apparently) and explains the Festival of Lights to his son.

Stream The One With The Holiday Armadillo here.

See? Hanukkah movies and TV shows worth watching do exist. Now if only we could get some claymation Hanukkah films in the mix, I would be satisfied.