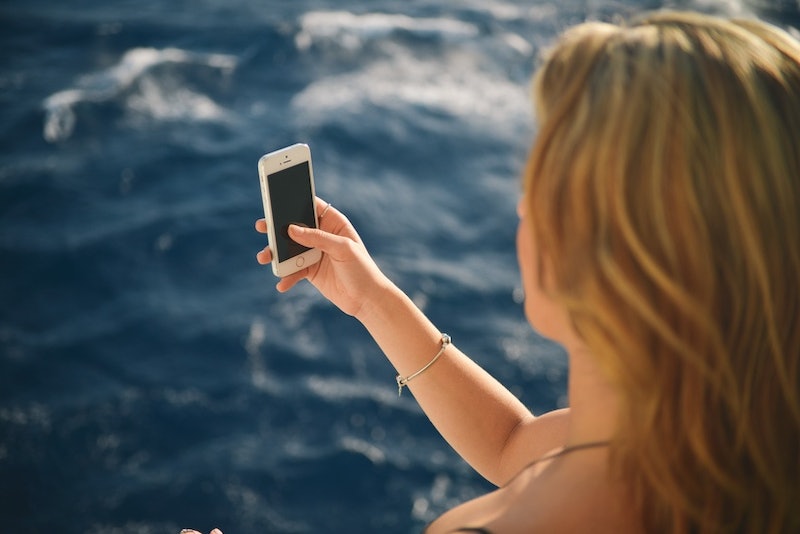 For many of us, Instagram is a way to share beautifully filtered photos of important subjects like our dogs’ favorite sleeping positions and the ramen we ate for lunch, but for some users of the social media app, Instagram is much more than a procrastination-tool: It’s a living. If you’re wondering how Instagram stars make money — specifically, how internet-celebs translate photos with Valencia filters into cold, hard cash — keep reading. There’s a lot more money involved in popular Instagram accounts than you might think, and it comes down to a combination of brand sponsorships, views, and followers.

Last month, Australian social media star Essena O’Neill made headlines when she chose to retire from Instagram, leaving behind over 612 followers. O’Neill, who had been known for her popular “fitspiration” posts, said of her decision, “Social media isn't real. Everything I did was edited and contrived and to get more views.” Although O’Neill’s commentary on the world of social media shed light on just how constructed it can be, she also surprised many by talking frankly about the commercial side of Instagram, revealing that she had been paid to wear certain items of clothing in her photos and to promote brands and products. “If you don't think it's a business, you're deluding yourself,” she said. “Companies will follow you with dot-points of what you say and what time you should post the photos.”

Listen to Bustle's new internet podcast The Chat Room right here for more about what it's like to be a woman on the internet:

Some Instagram users have argued that O’Neill’s experience isn’t universal, and that the social media platform can be a force for good, but her very public exit and explicit discussion of the business behind being an Instagram star has many of us asking just how people earn money through the photo sharing network. For Instagram celebs — also called “social media influencers”— it mostly seems to boil down to…

Sponsorships from companies and product promotion.

According to The Guardian, as of 2014, 90 percent of Instagram users are below 35 years of age and more than 50 percent of those users use the app every day. It’s no wonder that companies ranging from Amazon to Nike have realized that Instagram is an effective, profitable way to reach a young market. By partnering with Instagram stars that have tens or even hundreds of thousands of followers, brands can reach a lot of people with a single post. These days, there are agencies devoted to pairing Instagram accounts that have large followings with companies looking for advertising or exposure.

People with successful Instagram accounts might make deals with companies in a number of ways. Some companies send free products to influencers, in the hope that he or she will feature the products in a post. For example, Blake Scott, the blogger behind The Scott Effect, explained to Observer that in his first year of using Instagram, he didn’t make money at all, but he did receive products. He said, “[S]omeone would say, ‘I have shoes, I love your style, I’m going to send them to you.’”

In other situations, a company might pay an Instagram celeb to wear or use a product in photos or tag a brand. A business might sponsor an influencer to travel to take part in certain events, with the agreement that he or she will post photos. For instance, Liz Eswein, the user behind @NewYorkCity (an account boasting 1.3 million followers), explained to The Guardian, “Instagram has taken me around the world,” adding, “I recently came back from Chile for a project we are working on. I worked with the tourism board for Namibia. I recently went to Shanghai and before that Dubai and Turkey, all for clients.”

How much money are we talking about?

There’s a lot of money to be made in the world of social media sponsorships and advertising. Harper’s Bazaar puts the estimate of how much companies spend on sponsored Instagram posts at more than a billion dollars annually. However, not every Instagram user can expect to start raking in the big bucks because the amount of money that people make from their accounts largely depends on how many followers they have. Put simply, the more followers you have (and therefore the more views you have to offer a brand), the more you can charge businesses to sponsor posts. Danielle Bernstein, of @weworewhat, told Harper’s Bazaar in May that she usually charges between $5 thousand and $15 thousand for a single branded Instagram post. At the time, she had 992,000 followers, but thought she could raise her fees significantly once she passed the one-million-follower mark (which she now has). Conversely, Liz Eswein of @NewYorkCity told The Guardian that she charges companies one dollar for every “like” that a sponsored photo receives, in addition to a separate charge for the photos themselves. Some of her recent sponsored images have each been “liked” more than 23 thousand times.

How do I get in on the action?

The key to getting brand sponsorships is having a lot of followers. Dash Hudson, an agency that connects brands with Instagram influencers, usually doesn’t choose accounts that have fewer than 10 thousand followers. The Mobile Media Lab, a company that similarly pairs brands and influencers, also puts the bar at 10 thousand.

To appeal to companies looking for content to sponsor, it’s also important that you produce consistently high-quality content yourself. Thomas Rankin, CEO of Dash Hudson, explained to the Huffington Post what his company looks for in an account: “What does the content look like? Does the feed have beautiful, original photos? Is the style of content what we're looking for [for] the brands we're working with? What's their follower number and engagement rate?” Alexandra Ma also highlights in the Huffington Post the importance of being engaged and active with social media and recommends reaching out directly to companies whose brands you believe are well suited to your own.