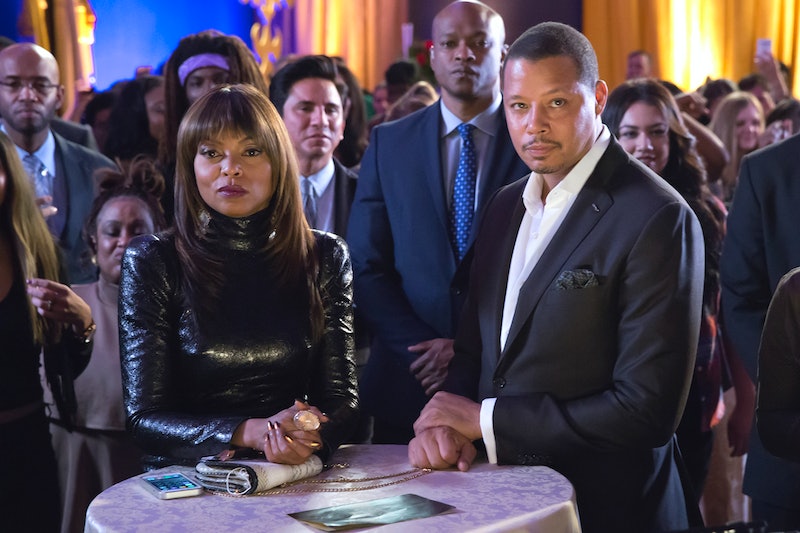 Just when I thought things couldn't get more dramatic on Empire, Naomi Campbell walks through the door and my whole world is turned upside down. You remember Campbell's character Camilla, right? She had a hot and steamy relationship with Hakeem before Lucious tried to bribe her out of Hakeem's life. Well, Camilla is back on Empire , and she's now in charge of Empire Records. Wait, you might be thinking, what about Lucious, or Dre, or Jamal, or Hakeem, or even Cookie? Well, Lucious was removed from the Empire Records board by the hand of Mimi, meaning he is no longer chairman or CEO of the company.

Let's rewind and talk about one of the biggest coups in television history and why it's all Hakeem's fault, shall we? Mimi Whiteman has clearly been up to something since she first came around Empire. The something remained a mystery until the winter finale when Mimi revealed that she wanted the board of Empire Records to vote to remove Lucious as chairman and CEO by a majority vote. It is then we learn that the Lyon family owns less than half of Empire, which seems like poor planning to me, but that's neither here nor there.

Meanwhile, Camilla — who is now married to Mimi — visits Hakeem and basically wants to start right back up where they were last time they saw each other. Hakeem notices the ring on her finger and asks if she's married, and without revealing who she's married to, Camilla says that it's not what it seems and that everything she's doing is for her and Hakeem. Interesting, but there's no way Hakeem is falling for that right?

Wrong. When brought to a vote, Lucious was indeed removed from the board as chairman and CEO by none other than Hakeem, who voted against his father.

The big question now is what does Camilla have in store for Empire, since Mimi made her the proxy currently in charge of the company. If Camilla is planning on making Hakeem the leader of the company, then I'm all ears. But, if she has anything planned that's going to cause damage, distress, and drama to the Lyon family then I'm gonna ask her to please exit stage left and let Cookie sort this mess out.

It would make sense that Camilla might be trying to get Hakeem in a power position at Empire, especially after the discussion they had when she showed up at his door. If she really did marry Mimi for her and Hakeem, she might plan on ousting Mimi and getting Hakeem at the head of the table.