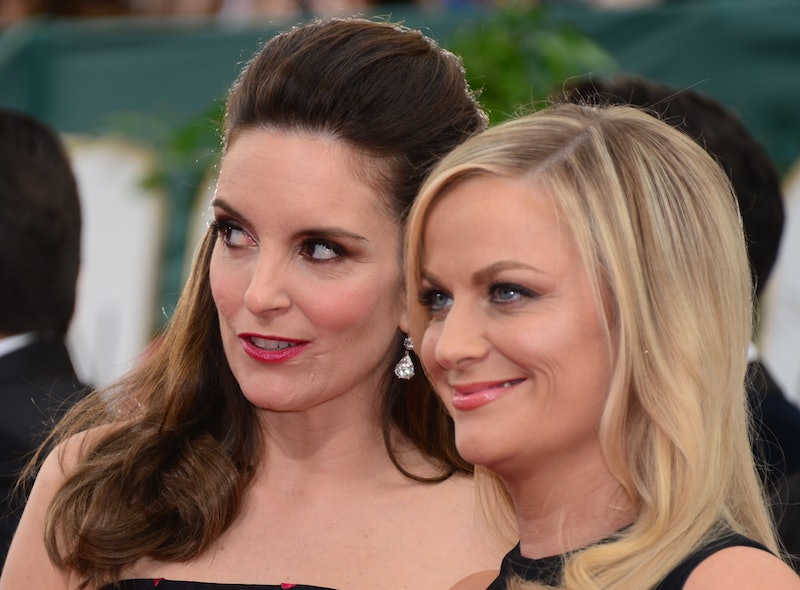 Sisterhood is one of the strongest bonds that exists. As someone who is best friends with her sister, I know for a fact that having a sister is one of the greatest things in the world. Not only is a sister someone you can lean on for life, but she makes the best friend in the world and helps you make all kinds of good and bad decisions. That said, DNA doesn't define sisterhood. I mean, just look at The Sisterhood of the Traveling Pants. If four best friends can fit into one pair of pants, that pretty much proves that the bonds of sisterhood go way beyond blood. Also, look at Tina Fey and Amy Poehler who are "chosen sisters" in real life. Plus, they're also starring in a movie called Sisters.

While talking with People about her upcoming comedy with Fey, Poehler said, "None of us have sisters — all brothers — so I think, as a woman, you get lucky if you get to choose your family and sisters and people who knew you then, but you're not related to them, so it's easier." And that's just one of the many reasons Poehler describes them as "chosen sisters."

It's no secret the two are best friends and it comes as no surprise that they view one another as sisters. So let's take a moment to look at the ways Poehler and Fey actually act like sisters, proving sisterhood is something you're not just born into, but something that is earned.

1. When They Support One Another

The most important part of being sisters is that you support each other at all times. Poehler and Fey have always done just that during their 20-year friendship. For example, while answering fans questions for Glamour , Poehler said about Fey: "I think one of your greatest accomplishments was transitioning from the captain you were at SNL to creating a show [30 Rock]. That is so hard — extricating yourself from a place you were so comfortable and successful, then doing something else so well."

Whether they're starring in a movie, appearing on SNL, hosting the Golden Globes, or just living life, these two know how to have fun and that's what makes sisters so great. If you can't be goofy with your sister, then what's the point?

3. When They Throw Back A Few Drinks

Remember that time at the Golden Globes when they took their drinks on stage after losing to Lena Dunham? Perfection. Plus, who doesn't like to go out drinking with their sister? It makes for a great night and a sister is the best drinking buddy.

4. When They Don't Hold Each Other Back

Sisters never hold one another back and always want the other to succeed. It's clear Poehler and Fey feel this way about each other. For example, Fey praised Poehler during their Glamour chat proving they admire each other's accomplishments. "I would say that one of your greatest accomplishments, Amy Poehler, is that you have so successfully used your art and comedy as a source of positivity in the world, by creating Smart Girls, by making [Leslie in] Parks and Rec not only a positive feminist character but creating a good-hearted worldview within that program."

5. When Their Relationships Don't Get In The Way

Even though Fey is married with two children and Poehler is a mom of two, they still remain the best of friends, work their asses off, and are still going after their dreams. It's important for sisters to always be there for one another and ensure that their bond as sisters remains tight, no matter if they're married or have a family. Clearly, these two know how to keep their "chosen sisters" relationship intact.

6. When They Push One Another

It's clear from any interview, especially the Glamour one mentioned above, that Fey and Poehler are there to push each other to become even more successful than they already are. That's what sisters are for: to ensure you're doing better than your best and that you never give up.

7. When They Show Unconditional Love

You can't be sisters without unconditional love just like the love the two actresses have for each other.

There's no doubt Poehler and Fey are #SisterGoals.

More like this
Kris Jenner Drunkenly Toasts Khloé Kardashian’s 38th Birthday With This Speech
By Grace Wehniainen
Selena Gomez Is Fine Being Single, But She Still Manifested Romance On 'SNL'
By Martha Sorren, Jake Viswanath and Jack Irvin
Martin Hancock’s Wife Played A Key Part In His Return To 'Coronation Street'
By Catharina Cheung
Why Sara Pascoe's Husband Is Familiar To Comedy Fans
By Alice Broster
Get Even More From Bustle — Sign Up For The Newsletter