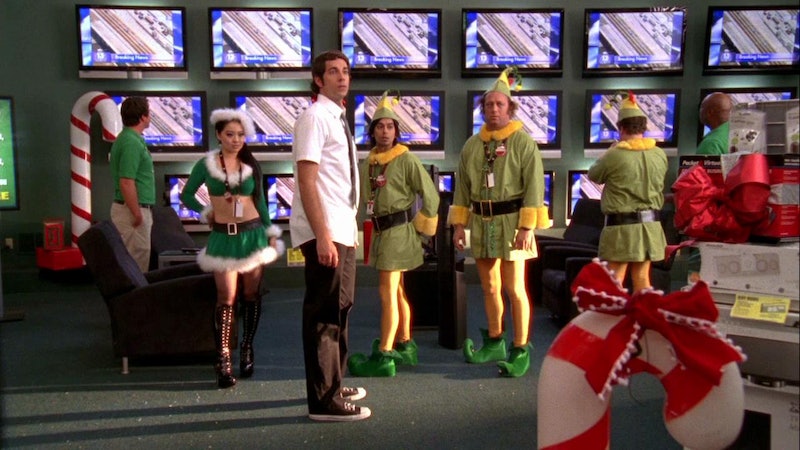 There is no bad time to revisit Chuck, but the holidays are an especially wonderful time to rewatch the spy comedy. Every episode is full of adventure, heartfelt moments between friends and family, and some of the best physical comedy to ever hit the small screen — it is exactly the kind of show you want to watch between finals, holiday parties, and the unfathomable stress of gift wrapping. Happily, Chuck happens to have an amazing Christmas episode perfect for the season. When the Season 2 episode, "Chuck Versus Santa Claus," aired, it was one of the best reviewed episodes of the entire series, and it has aged like a fine video game.

The episode, which finds Chuck, his family, Sarah, Casey, and the entire Buy More crew held hostage in the Buy More by a Fulcrum agent, is chock full of Easter eggs for — ahem — die hard fans. From familiar guest stars you totally forgot were there to Bartowski family Christmas traditions, there are lots of things you have definitely forgotten about the Chuck Christmas episode if you haven't seen it in years. Before you make yourself a cup of hot cocoa and queue up the episode on Netflix, here are 11 things you should look for in this excellent episode of Chuck.

1. The Entire Episode Is An Homage To Die Hard

The episode is full of references to the classic Bruce Willis franchise Die Hard, and even hints that Chuck exists in the same universe. Reginald VelJohnson plays his Die Hard character Al Powell, and it is revealed he is Big Mike's cousin. They even share Twinkies after the hostage situation ends, as a nod to Powell buying his wife Twinkies in the film.

Fandoms literally collide in this episode.

3. Chuck & Ellie Have A Twilight Zone Marathon Every Christmas

Chuck reveals that the Bartowskies watch episodes of The Twilight Zone every Christmas, proving once and for all the Bartowskis are the coolest family ever.

Before Rooker went on to play The Walking Dead's one-handed, fan favorite Merle Dixon, he guest starred as an undercover Fulcrum agent who orchestrates the entire hostage situation to get his hands on Chuck in order to find out the whereabouts of Bryce Larkin.

5. Morgan Is The Unsung Hero

Thanks to some quick thinking and a whole lot of fake snow, Morgan catches Fulcrum agent Ned off guard long enough for Awesome and Big Mike to tackle him. As it usually goes with Morgan, he doesn't get any credit for his heroism.

This episode was a major turning point in the series. While most of the action had been played for laughs or seen as low stakes, at the end of "Chuck Versus Santa Claus," Sarah kills a Fulcrum agent. Even though he surrenders, Sarah sees the threat to Chuck as too large if they let the man go, so she shoots him after he surrenders with Chuck looking on.

In a cringeworthy moment, Lester kisses Anna — who has no interest in kissing him — while Morgan looks on. The incident causes Morgan to doubt his relationship with Anna, but I think everyone can agree Anna was the one with the raw deal here.

Way before Chuck finds out his mom was a spy, he gifts Sarah her charm bracelet mid-hostage situation. It's an adorable scene that has extra meaning when you watch it later, knowing where the show is heading.

Hale starred as the Buy More's assistant manager in Seasons 2 and 3, and, in the Christmas episode, he is the first hostage released from the store.

Casey loses a toe when Ned shoots him the foot — supposedly by accident. When Sarah tells Casey he will be fine with nine toes, Jeff chimes in that he's good with eight.

11. Ned's Name Is A Reference To Groundhog Day

Die Hard isn't the only movie referenced in the episode. The Fulcrum agent who takes everyone hostage is named Ned Rhyerson as a nod to the character of the same name (with a slightly different spelling) who keeps causing poor Bill Murray to step into an icy puddle in Groundhog Day .

Now you are all ready to go forth and enjoy Chuck's amazing Christmas episode... and probably also Die Hard because they really do make for a perfect pair.