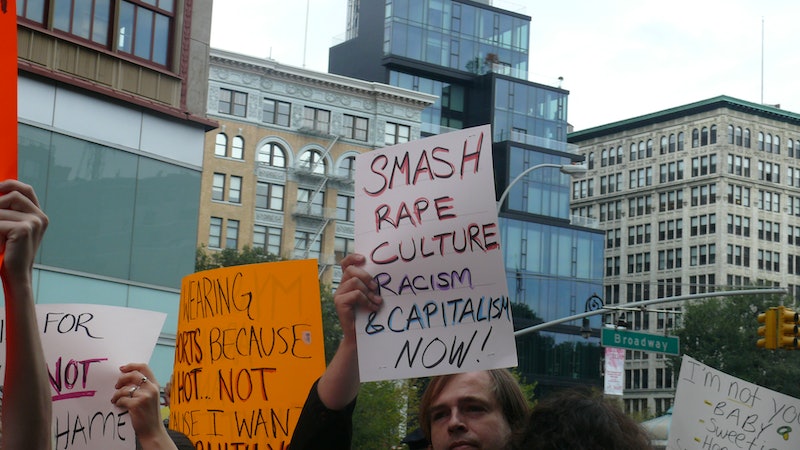 The more I learn about rape culture, the more I realize how rapey our everyday language can be. Like racism, heteronormativity, ableism, cissexism, and pretty much every form of oppression, rape culture is so engrained in the way we speak, it's hard not to use expressions that perpetuate rape culture. The first step, though, is realizing what exactly we're saying — because some of the phrases we view as funny or innocent have some pretty insidious implications.

It took a while for me to eliminate rape culture, which Transforming a Rape Culture author Emilie Buchwald defines as "a complex set of beliefs that encourage male sexual aggression and supports violence against women," from my everyday speech, and it probably still lingers in many ways. For example, I always said "that sucks" instead of "that stinks" because I hated the image of something stinking. It seemed too visceral to use in a casual conversation. But now I say "That's awful" or just "I'm really sorry that happened."

When it comes to calling others out on their rape-culture-perpetuating speech, I'll be honest: I usually don't in the moment. But that doesn't mean I just let it slide. I find it more effective to discuss these phrases and the beliefs behind them in a separate conversation focused on the language itself rather than one individual's use of it, since we're all probably guilty of it at some point.

Here are some phrases worth thinking twice about to dispel ideas that contribute to rape culture.

When this metaphor is used to put people down, the person "sucking it" is not supposed to be enjoying it, which implies that they are not doing it by choice. Rather, the person using the phrase is asserting their dominance by making the other person "suck it." This normalizes rape as a way to assert dominance. "Suck it," along with "that sucks" and "that blows," also depicts oral sex as an activity that puts the receiver above the giver, when in fact many people "suck it" by choice and enjoy it. To eliminate rape culture, we need to divorce oral sex from these power dynamics. As long as receiving oral sex is considered a way to assert dominance, it will be considered normal to force or pressure someone into it.

This phrase, like "leading him on," is usually used to describe a woman who does something to "make" a man think she will sleep with him and then doesn't deliver on her supposed promise. The problem with this idea is that nothing can make someone think you'll sleep with them unless you don't believe in affirmative consent. If you believe in affirmative consent, under which only "yes" means "yes," then nobody can lead you to believe they will sleep with you unless they explicitly say they want to sleep with you. When we say that a woman is teasing someone by kissing him or wearing a short skirt or hanging out in his room, we imply that she is being unfair by denying him something she owes him. When we teach women they owe men sex and make them feel unkind for not providing it, we perpetuate rape culture.

When a man says that he "got it in" or "scored" with a woman, he is conveying that he won, which implies that a battle of wills took place, whether or not it actually did. Instead of a mutual agreement, sex becomes a game that a man wins by convincing a woman to have it. But if you need to convince someone to have sex with you, you do not have affirmative consent. Women, on the other hand, win this imaginary game by refusing sex, which contributes to slut-shaming by implying that a woman who enthusiastically consents to sex has lost, disrespected herself, and been taken advantage of. And as someone whose partner has been asked "are you going to get it in?", I can attest to the fact that it can make some women feel like a walking soccer goal.

Whether used to describe the actions of the "dogged nice guy" we see in movies and TV, an initial friend eventually rewarded the female lead's affections in exchange for his kindness, or the actions of a man picking up a woman for a one-night stand, this expression, too, implies that convincing a woman to date you or have sex with you is a game you win by getting her to do something she initially didn't want to. Rather than waiting for someone equally enthusiastic about a sexual encounter, the concepts of "winning her over," "picking her up," "getting past her defenses," and "pulling moves on her" all encourage men to try to turn a "no" into a "yes." When a "no" is turned into a "yes" through pressure or coercion, though, the "yes" likely isn't really a "yes." It's not just consent that's important — it's enthusiastic consent.

Complaining that a woman has relegated you to the "friend zone" suggests that she owes you something beyond friendship. It's OK to express disappointment that you want something more with a friend and they don't — this happens to women as well — but I often see men express frustration with the other person rather than the situation, when she has really done nothing wrong by feeling the way she feels. The concept of the friend zone also objectifies women by implying that they aren't potential friends, just potential romantic or sexual partners, and that friendship with women is merely a strategy to obtain a different kind of relationship. When we imply that women owe men sex and are not good for anything else, we perpetuate rape culture.

How did one of the most fun activities imaginable also come one of the worst insults imaginable? You guessed it: rape culture. If "f*ck you" alluded to consensual sex, after all, it would be a nice thing to say. As Erin McKelle points out on Everyday Feminism, "f*ck you" associates sex with violence when we use it to wish harm on someone. Associating sex with violence blurs the distinction between sex and rape — a distinction that we all need to realize is actually very clear. When we consider rape akin to sex, we normalize it, and that makes the world less safe for everyone.