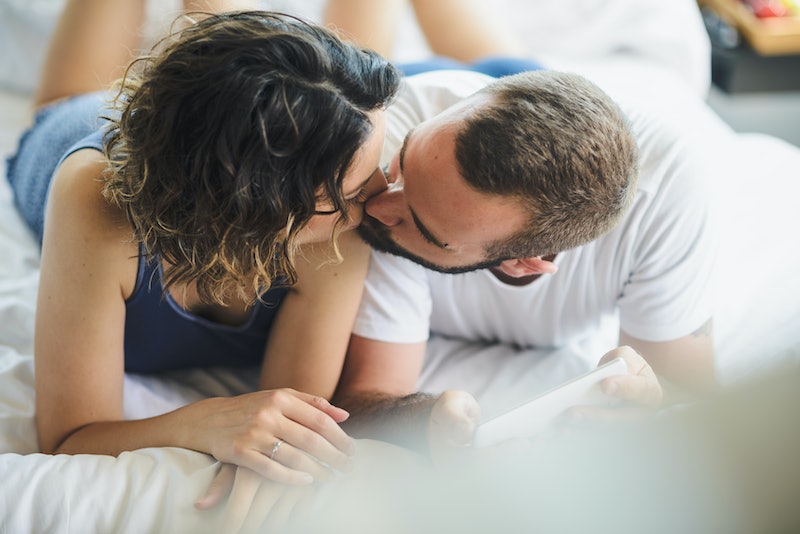 Because the holidays are the time of year for family, friends, and lots of kisses (hello, mistletoe!), dating site Coffee Meets Bagel has compiled the results of their international study on kissing — and how to kiss well.

Surveying over 10,000 people in Hong Kong, Singapore, Canada, Australia, the United States, and the UK, Coffee Meets Bagel was able to figure out what makes for a perfect kiss. While the results vary a bit from country to country, what they did find is that, at the end of the day, when you’re dating someone, kissing, and good kissing, is essential. And the first kiss, although not necessarily a dealbreaker if things don’t go as planned, is really important to both people.

According to philematologists, those who study kissing, 90 percent of people in the world kiss. Although the scientists aren’t exactly sure from where the act of kissing originated or the purpose it services in regards to evolution, they can definitely say that it feels really good. There’s nothing in the world like lip-locking with someone you’re in either in love with or just terribly attracted to, because whoa… good stuff.

So what makes for the perfect kiss, at least according to 10,000 people? Here’s what Coffee Meets Bagel uncovered.

1. Not Everyone Wants To Be Kissed At The End Of A Date

Surprisingly, the survey found that not everyone wants to lock lips at the end of a date. In fact, only 41 percent of the singles across the globe said they prefer to be kissed when the date comes to an end. Although it doesn’t say what the remaining percentage prefers (maybe an end of date lay?), it’s interesting that this was less than 50 percent.

2. The Perfect Kiss Length Is Probably Shorter Than You Think

According to the survey, 61 percent of men and women think the perfect amount of time for an end of date kiss is somewhere between two and five seconds, which forces me to ask, “Who are these people?” Counting out five seconds as I sit here, does not make for a lot of kissing time. You can’t even get a feel for someone’s kissing style in five seconds!

3. Bad Breath Is The Worst

Not that anyone should find this shocking, but for 38 percent of singles, bad breath is the worst and the biggest complaint. However, here’s a fun fact I learned after dating too many smokers: Lemon is your friend when it comes to combating a stinky mouth. For example, if you go out for dinner and load up on garlicky goodness, sucking on a lemon before you lean in for that goodnight kiss can actually help A LOT.

Although we’d all looove to meet someone who kisses exactly the way we kiss, that can’t always be the case. I know, I know ― it’s a damn tragedy. But for those of you who fear that maybe your kissing technique needs some work, don’t stress out too much. According to the survey, 32 percent of men are willing to stick it out with a bad kisser and try to teach them the ways of good kissing, while 38 percent of women will give the bad kisser some time, but if there’s no improvement, they’re out of there.

5. Lips Aren’t The Only Place People Like To Be Kissed

While lips do come in first place for kissing, in Singapore, Hong Kong and Australia the next favorite spot is the forehead, and here in the the States, we’re all about the cheek kissing. Canada and the UK also prefer the cheek, too.

6. The Desire To Kiss Or Be Kissed Is Signaled In Two Ways

In Hong Kong, Singapore, United Kingdom and Australia, if someone wants to be kissed they will hold eye contact. Although the study doesn’t say how long these people will hold eye contact, I do hope it doesn’t creep into several-minute territory, because awkward. In the U.S. and Canada, we’re a bit more brazen. If we want to start a makeout session, we make body contact.

7. Tongue Kissing Isn’t All That

The French may have invented the tongue kiss (even though the British and American soldiers of World War I deserve some credit for the name), but the rest of the world isn’t super crazy about deep tongue action.

For 44 percent of those in Hong Kong and Singapore, kisses that are “light and gentle with a little bit of tongue,” is the preferred kissing technique. In Australia, Canada, United States, and United Kingdom, 46 percent want their kisses to be “deep, but without tongue.” That's right; no tongue at all. At least going the no-tongue route might lead to less of all that bacteria transferred during a kiss. Or maybe not.