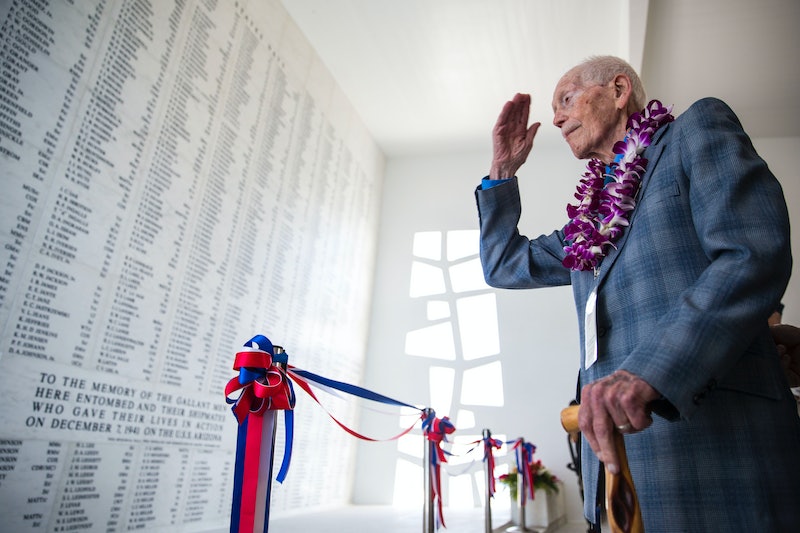 Pearl Harbor, the fateful attack that inspired the United States' active involvement in World War II, occurred 74 years ago Monday, and the Pearl Harbor survivors are still able to recount their first-hand stories, showing that the wounds remain fresh. Since 1941, narrative films, documentaries, memorials, and parades have provided emotionally-charged retrospective of that day. But still, nothing can compare to individual accounts of those who experienced Pearl Harbor first-hand.

On Sunday morning, Dec. 7, 1941, the Imperial Japanese Navy attacked the U.S. naval base in Pearl Harbor, killing over 2,400 Americans and injuring over 1,250 more. More than 350 Japanese aircrafts were involved and struck the base in two waves that lasted 90 minutes. Those 90 minutes caused monumental damage to the naval base crafts and startled the American people, who declared war against Japan the very next day. Shortly after Franklin D. Roosevelt's initial declaration, Nazi Germany and Italy declared war against the United States, and the second World War escalated from that point on.

Sharing these stories is becoming increasingly important as the number of Pearl Harbor survivors dwindle. The majority are in their 90s or older, but their memories are sharp as a whip and their accounts remind of us of the simultaneous heroism and tragedy that took place on that day.

The USS Arizona is the only sunken battleship that was not recovered after the attacks. Instead, it remains on the bottom of the Pacific Ocean and commemorates those who died on it. The battleship, which was struck by a bomb and sank within mere minutes, marks the greatest loss of life on any American warship in history. Marine Corporal E.C. Nightingale, who was among the ship's survivors, told the website Eye Witness to History that he was leaving the breakfast table when the sirens sounded. His experience reflects the epitome of true camaraderie.

The railings, as we ascended, were very hot and as we reached the boat deck I noted that it was torn up and burned. The bodies of the dead were thick, and badly burned men were heading for the quarterdeck, only to fall apparently dead or badly wounded. The Major and I went between No. 3 and No. 4 turret to the starboard side and found Lieutenant Commander Fuqua ordering the men over the side and assisting the wounded. He seemed exceptionally calm and the Major stopped and they talked for a moment. Charred bodies were everywhere.

Nightingale went on to explain that upon being flailed into the water, his body's state of shock inhibited him from swimming the remaining 150 feet to a pipe line.

...I was about to go under when Major Shapley started to swim by, and seeing my distress, grasped my shirt and told me to hang to his shoulders while he swam in. We were perhaps twenty-five feet from the pipe line when the Major's strength gave out and I saw he was floundering, so I loosened my grip on him and told him to make it alone. He stopped and grabbed me by the shirt and refused to let go. I would have drowned but for the Major. We finally reached the beach where a marine directed us to a bomb shelter, where I was given dry clothes and a place to rest.

Ginger, who lived in Hickam Field, Hawaii, was at home during the time of the attacks and remained there, despite seeing gunfire and bombs just outside her window. She wrote about the day in her diary, obtained by Essential Pearl Harbor. Ginger disappointedly exclaimed, "There goes my graduation..." before realizing the seriousness of the situation. Her family's resolve to remain in the house for the duration of the attack provides a shocking look at what life was like without national news coverage or television, which surely would have provided better direction. Ginger only knew what she could see from her window.

I no sooner got back into the house then a terrible barrage came down just over by the Post Exchange. That's just a block kitty corner from us, so the noise and concussion was terrific. Mom and I were still standing in the doorway and we saw the PX get hit. I was getting more worried by the minute about this time as they seemed to be closing in the circle they had been making around us. (The Japs were flying around in a circle bombing us, Pearl Harbor, and machine gunning Fort Kam.)

Ginger explained that she and her mother — her father went to work despite the bombs — had to wait to leave the house until the explosions had ceased.

I hated to go into my room because the planes kept machine-gunning the street just outside my window and I kept expecting to see a string of bullets come through my roof any minute. We had all gotten dressed in the meantime and had packed a suitcase and were ready to leave any time. Finally, after two and a half hours, the planes went away and we left.

NBC San Diego covered a first-time meeting between two of Pearl Harbor's oldest survivors, neither of whom knew each other until they were over 100 years old, in July 2015. One of them was USS West Virginia crew member Jim Downing, who, thankfully, was not on his ship when the explosions hit. He commented on the persistent impression left behind by the events, saying, "most of what happened is just as clear as if it were last week." At the time of the attacks, Downing was just 28 years old. In the aftermath of the attacks, he did his best to show respect and appreciation for those who were lost by memorizing their name tags and writing letters to their families.

The saddest thing I saw that morning was sailors being blown off the ship, come up out of the water, feel the oil on their bodies ... and they just became human torches. ... Once the Japanese had sunk our ship they didn't care so all we had to do was fight the fires and take care of the wounded.

Fort Worth's Star-Telegram newspaper recorded the story of William Hughes, who was sleeping aboard the USS Utah when he awoke to massive explosions. His battleship was hit by torpedoes while in port, causing it to sink. Hughes touched on the duality of tragedy and heroism by saying, "It was our worst hour and yet our finest hour."

On that lazy Sunday morning, most off-duty radiomen were asleep on our dry, comfortable cots in the bunk room. The tumultuous explosion that rocked the ship almost threw us out of our bunks. We must have been looking at each other in sheer amazement. Within 20 or so seconds, a second jarring explosion again rocked the ship, also from the port side, and within minutes USS Utah was taking on a pronounced list to port.

Realizing that the ship was rolling over, Hughes swam to shore and found refuge in a pipe line trench. Remarkably, his only wound was from a piece of coral.

These sights gave us a knot in the pit of our stomachs and very heavy hearts. ... We were the lucky ones, collecting ammunition. Many were assigned the job of collecting bodies and body parts from the murky waters of the harbor.

Milton Mapou was on the USS Detroit, a ship that was left untouched when the first explosions came, reported The Columbus Dispatch. Just 21 years old at the time, he ran to the gun station but wasn't allowed to take action.

But my gun station was big guns, and we couldn't use them, so we just had to take it easy and wait and do what we could. We felt kind of helpless. ... Everything that'd happened, you couldn't get it out of your mind. We didn't know how many men were lost, but we couldn't think about it right then. This was war now.

Later on during World War II, Mapou's leg was shattered. Today, he wears a Pearl Harbor survivor hat to remind people that although the attacks happened over seven decades ago, we should never forget the people who were lost during it. He explains how he feels when people come up to thank him.

It brings something out in you. Not to say I enjoy it but, I mean, it makes me feel good.