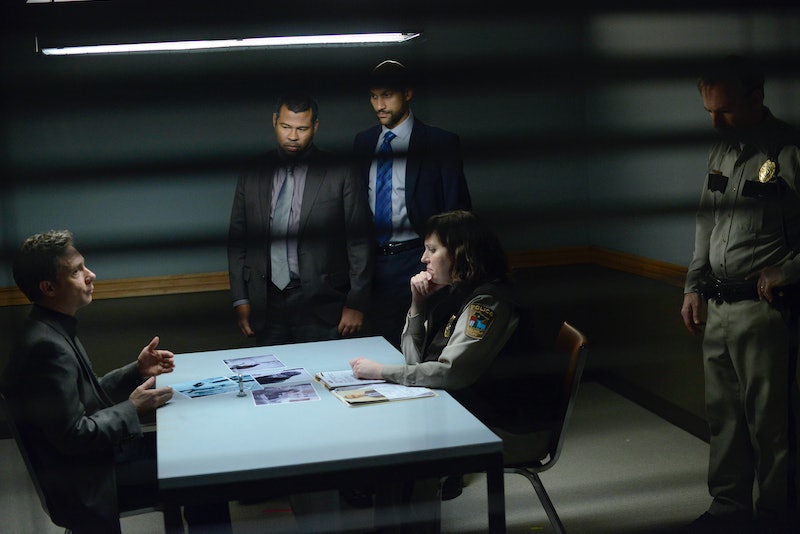 Given the fact that the second season of FX's Fargo rewound the clock from 2006 to 1979, it seemed like a foregone conclusion that none of the same actors would appear in both seasons. Gone were the acclaimed performances by the likes of Martin Freeman, Billy Bob Thornton, and Allison Tolman, replaced by terrific turns from Kristen Dunst, Patrick Wilson, and Ted Danson. So it likely ranks as one of the TV season's biggest surprises that this Monday, in the penultimate episode of Season 2, one of Season 1's biggest stars made a surprise cameo — and in a wholly unexpected way. Martin Freeman is back on Fargo ... but he's not playing Lester Nygaard.

Last we saw of Freeman on Fargo, he was literally on thin ice, as Lester tried to evade capture — and promptly fell through said thin ice straight to his untimely death. So what's the actor doing on Season 2? Even if a character randomly happened to run into Lester, he would have been a pimply teenager back in 1979, not anyone who could be convincingly played by 44-year-old Freeman. Turns out he wasn't reprising his Season 1... or even really playing a character at all, in fact. Instead, Freeman recounted the events we were watching unfold as an unseen, anonymous narrator.

During the hiatus between seasons, Fargo showrunner Noah Hawley explained the anthology nature of his show by describing the disparate seasons as chapters in a book. "I like the idea that somewhere out there is a big, leather-bound book that's the history of true crime in the Midwest," he said back in July. "The movie was Chapter 4, Season 1 was Chapter 9 and this is Chapter 2. You can turn the pages of this book, and you just find this collection of stories. But I like the idea that these things are connected somehow, whether it's linearly or literally or thematically. That's what we play around with."

In this Monday's episode, "The Castle," that literary metaphor became literal, as the hour began with an image of a big, leather-bound book sitting on a shelf, titled "The History Of True Crime In The Mid West." The usual disclaimer about the show being a "true story" appeared as the prologue of the book, rather than superimposed over the show as usual, and the content of the message was slightly altered:

The events depicted in this book took place in Minnesota, Wisconsin, Iowa, Nebraska, and North and South Dakota from 1825 to the present.

(It's interesting to note that this foreword teases both locations that haven't yet appeared in the two seasons of Fargo thus far, as well as a time period that hasn't been explored yet. Hawley recently revealed that Season 3 will once again fast forward to the present day, taking place just a few years after the events of the first; perhaps Season 4 will turn back the clock all the way to the 1800s?)

As the pages rifled over to Chapter 14, Freeman's voice began narrating the words written under the heading, "Luverne, Minnesota — 1979: The Waffle Hut Massacre." It's a bold choice to have the events of such a pivotal episode underscored by a voice that's so familiar to fans of the show. It's also curious that this device was just inserted in the season's penultimate episode, rather than having been used all season long. It will be interesting to see whether Freeman's narration remains in place for next week's finale, or whether this was a one-time thing.

While we're on the topic of surprises, Freeman's voice wasn't the only thing to make an unexpected reappearance in "The Castle." Those confounding aliens returned to Fargo — and more blatantly than ever before, too. Just as events at the Motor Motel were reaching their bloody climax, a giant flying saucer hovered in low over the parking lot, emitting a throbbing roar and shining bright lights over prone figures on the ground. It might have been easy to assume that the U.F.O. was a hallucination of Bear Gerhardt's dying mind if it weren't for the fact that everyone — including Lou Solverson and Hanzee Dent — witnessed it, too.

Lou was able to take advantage of the flying saucer's sudden appearance in the sky to blow a distracted Bear's brains out. But other than their usefulness in that particular scenario, the aliens did nothing, vanishing as quickly as they came, leaving characters and viewers alike befuddled. Is that the last we'll see of the U.F.O. that kicked off the events of the season by distracting Rye Gerhardt at a crucial moment? Or will it have a part to play in the events of next week's finale? I wish I could skim ahead to the next chapter in that book and find out right now.