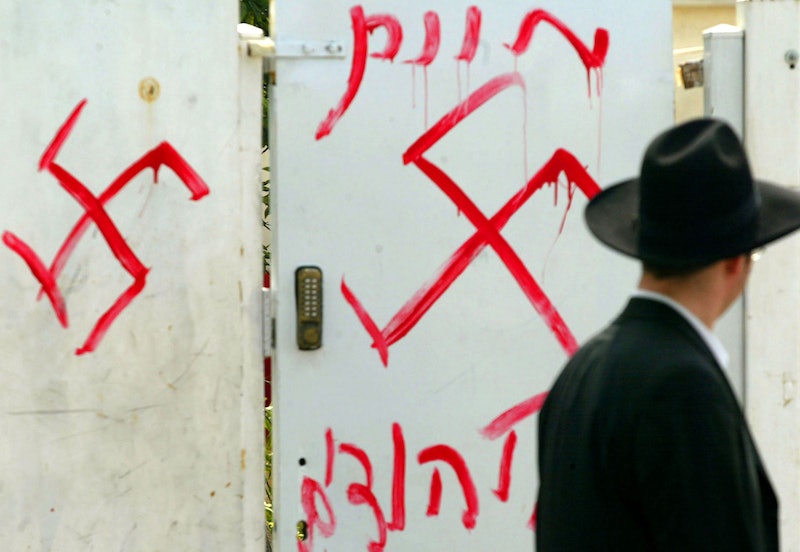 Yesterday, Israel's Parliament gave preliminary approval to a bill that would ban the word "Nazi," and any Nazi-related terms and symbols. Beyond "the purpose of learning, documentation, scientific study or historical accounts," Nazi-related words and symbols cannot be used, and "expressing the wish, hope, or anticipation for the fulfillment of the Nazis’ aims, or expressing sorrow or protest that they were not accomplished — [is] forbidden." Anyone who violates the bill, if it goes into law, can expect a six-prison sentence and the equivalent of a $28,000 fine.

The new law would also prohibit people from wearing the pinstriped outfits from the concentration camps, or the six-pointed Jewish star badges that Jews were forced to wear. And while a world in which people didn't throw around phrases like "Grammar Nazi" or joked about the Holocaust would be fantastic, critics of the bill have said it could infringe free speech and expression.

Over in The Jewish Daily Forward, Brent E. Sasley penned an op-ed a couple of alarming points regarding the current state of free speech in Israel:

Israel already skirts the edges of intolerance toward free speech with its Basic Law: The Knesset, which disqualifies parties from running in elections if they negate either the democratic character of Israel or its existence as the “state of the Jewish people" ... These are broad enough stipulations that they could, in theory, be used to outlaw a wide range of parties and candidates; as a matter of fact, they have been used to try to keep Arab politicians out of politics.

The motivations of the lawmakers who drove the bill are also important to examine. Dov Lipman, a Rabbi and a member of Israeli Parliament who backed this bill, testified that during the Beit Shemesh 2011 demonstrations, he was often called a Nazi.

In an email to The New York Times, he wrote:

I remember thinking to myself, ‘My goodness, my grandparents are Holocaust survivors, and perhaps their grandparents survived together with mine!’ Freedom of speech is important, but in my opinion, every country has to establish certain value-based limits.

But it seems those "value-based limits" may hinge on who is saying the words or carrying the slogans. Dov Hanin, a member of the left-wing Hadash Party, slammed the bill in Parliament, saying that according to this law, Prime Minister Benjamin Netanyahu should be arrested and fined — since he once told Stephen Hadley, former national security advisor under the Bush administration, that Mahmoud Ahmadinejad was a "modern-day Hitler."

And two years ago, ultra-Orthodox Jewish youth protested against the army draft by dressing up in the pinstriped concentration camp outfits and pinning Jewish stars on their chests:

Regardless of the discomfort that the swastika and Holocaust images might cause, the fact remains that there could, theoretically, be plenty of room for the bill to become a legal slippery slope. The main examples of Nazi symbol-users brought up here are not actually neo-Nazi organizers but critics of the Israeli government who are using Nazism as an analogy for the Israeli government and government officials — tasteless, but certainly not promoting neo-Nazism or inciting violence.

More like this
6 Organizations Fighting Police Brutality That You Can Support Right Now
By Syeda Khaula Saad and JR Thorpe
Eurovision Has Been Given A Whole New Look Ahead Of Its Liverpool Debut
By Bustle UK
This Is When Netflix Is Going To Start Charging You For Sharing Passwords
By Darshita Goyal
Here’s Where The NHS Nurses’ Strike Currently Stands
By Sophie McEvoy
Get Even More From Bustle — Sign Up For The Newsletter
From hair trends to relationship advice, our daily newsletter has everything you need to sound like a person who’s on TikTok, even if you aren’t.