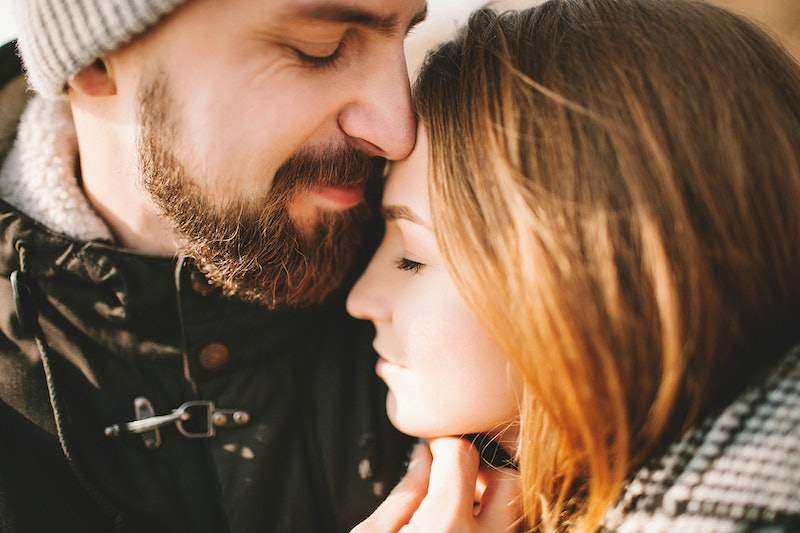 There comes a time in all relationships where we let down our guards just a little, and truly open up for the first time ever. Though it can be one of the most daunting tasks when you're just starting off, being vulnerable in relationships that are new is completely necessary to forming a connection and making it last. Regardless of how essential we know it is to making our relationships work, it still isn't fun feeling left so exposed when your new partner may not receive it the way you'd hoped. But above all, one of the most one challenging aspects of opening up is figuring out when to do it.

Unfortunately, there's no blanket answer to that question. It could be a few weeks into seeing someone when you guys finally decide to start talking about the serious stuff, or you guys may just be hardcore vibing on the first date. However things work out for you, there are a few times when it's absolutely key to be vulnerable while dating or else you risk having things fail to progress.

Even if there is no answer to exactly when these moments should happen, just know when they do you shouldn't be afraid to finally let your guard down. It will be worth all of those nail-biting moments leading up to it, trust me.

Initiating this conversation and following it through will probably one of the first ways you'll show someone how you feel. If you've been dating someone for a while but nothing seems to be coming of it because you two haven't talked about what “this” is, it's time to DTR.

Although it might seem terrifying to come right out and say you want a relationship, if that's what you really want, you shouldn't hold it back. There is always the chance that the person you're dating doesn't want the same things as you, but you'll never know if you don't ask. And once you finally DTR, you'll have a sense of security that you're both on the same page emotionally which is so much better than constantly referring to your significant other as someone you're kinda-maybe seeing.

I think that in all relationships which involve sex, it's crucial to have a “yes/no/maybe” list that you create and swipe with your partner so everything is kosher between the sheets. If you're starting to get physically involved with someone you're dating, it's important to not only open up on what you want, but discuss what you don't want without reservation.

We often feel the need to impress people when we start dating them, but accepting something sexually that we wouldn't normally is never an okay idea. If you're not willing to do it, make sure you are firm on that. And if you have some particular fantasies, don't feel shy sharing those too.

3. When You Show Them Something That Means A Lot To You

There are a few variations on this situation, but it all pretty much means the same thing. Whether you're taking new person to your favorite spot at the park where you go to relax, or you're introducing a potential S.O. to your dog (who is pretty much like your kid), showing your partner something important to you will leave you feeling vulnerable.

When you open up about important aspects of your life to someone new, you want them to both become accept those things and become a part of them. But if you never show them what's important to you, they'll never get to have in on that key side of who you are. You decide when this happens, but when it does just know it'll only make your bond stronger.

4. When They're Starting To Open Up To You

You don't have to be an open book straightaway in a new relationship, but always take hints from how your partner is going about things. If they've suddenly started sharing aspects of themselves that are important to them and that they rarely show other people, you're getting to that stage where they expect that in kind. It doesn't have to be all at once (especially if you're not comfortable with that) but show your partner you're just as invested in what's growing by giving them some pieces of you to match what they've been giving.

5. If You're Having Your First Fight

When you're disagreeing about something, certain aspects of your personality (including those you don't like very much) may come out for the first time despite how hard you've been trying to keep them in. Whether you have trouble with confrontation or you tend to hold grudges, having a fight will teach your partner a lot about you and vice versa.

You may not realize it in the moment but even unintentional and negative emotions can leave you feeling vulnerable later on. As long as you're able to talk after your fight, discussing coping mechanisms for the two of you to handle disagreements then that vulnerability isn't necessarily a bad thing. We're all flawed in the end, and someone who can learn to understand those flaws is one worth keeping around.