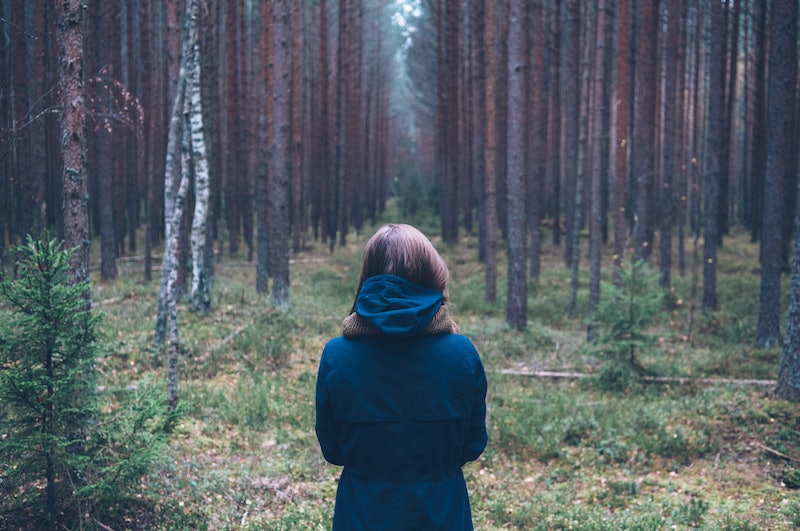 Unfortunately, insecurity is a natural part of the human experience. I think I'm a relatively confident person, but I still feel insecure A LOT. One of the costs of being alive is the fact that, no matter who you are, you can expect to deal with insecurity of some kind on a daily basis. It may be something small (like whether your smoky eye is too smoky) or something huge (like whether or not you've got what it takes to succeed at your chosen profession). Regardless of what makes you feel insecure, knowing what to tell yourself when you're feeling this way can help you keep excess negativity out of your life.

We all feel insecure about different things (and a lot of the same things, too, actually), but whatever it is you're feeling insecure about isn't really the point. The point is this: All levels of insecurity are unpleasant, and while feeling insecure is totally normal, it can steal your joy and seriously hinder your progress if you let it. So don't think you have to eradicate all insecurity from your life (because, if we're being realistic, that's kind of unrealistic), but do realize that it's important to know what to tell yourself when you're feeling insecure.

1. "It's OK To Feel Insecure Sometimes"

The second you start to feel overwhelmed by your insecurity, remember that it is OK to feel insecure sometimes. Give yourself permission to feel whatever you're feeling, because that acceptance will make it easier to overcome whatever it is that's making you feel down about yourself in the first place. If you beat yourself up for feeling insecure, you're just kicking yourself when you're already down, and that's not going to make dealing with your insecurity any easier.

2. "Everyone Deals With Insecurities"

I regularly berate myself for feeling insecure, and I think part of this is because I frequently think to myself, "No one can possibly be feeling as insecure as I'm feeling right now." But that just can't be true. I don't care how confident and self-assured someone is; no one is immune to insecurity. If you ever find yourself thinking that you're a giant weirdo for feeling so insecure sometimes, just remind yourself that you're not the only one who feels this way. It won't fix your insecurity, but it will make you feel less alone, and that's always helpful.

3. "I Can Be Insecure And Still Be A Strong Person"

I think one of the biggest reasons people (like myself) feel so horribly about their insecurities is that we falsely believe that insecurity is synonymous with weakness. But the thing is that it takes a lot of strength to be insecure and then do things anyway. (Case in point: Neville Longbottom.) So when you're feeling insecure, don't add to that misery by telling yourself you're weak, because you're really not.

4. "My Insecurities Will Get Better The More I Challenge Myself"

One thing I'm so grateful to have learned by the age of 25 is this: Your confidence won't get built unless you're willing to work super hard, take chances with no guarantee that they'll pay off, and risk failure. Ironically, being OK with feeling vulnerable is the only way I've been able to overcome my insecurities about pursuing writing professionally — and it's probably the only way you're going to overcome your biggest insecurities, too.

5. "Just Because I'm Feeling Insecure Doesn't Mean I Should Be"

I feel like we rarely see ourselves the way others see us. And while our validation should not come from how other people view us, I know it helps me feel less insecure when I realize that whatever I'm feeling is just that — a feeling. Feelings are tricky, subjective, and not an accurate interpretation of what's really going on around you. Allow yourself to feel whatever you need to feel, but don't mistake feelings for facts, and know that you're probably being way too hard on yourself.

6. "I Can Use My Insecurity As Motivation"

I can't speak for everyone, but for me, a lot of insecurity exists where I have yet to prove myself to myself. I try to use my insecurity as a motivator instead of a crutch, and you can, too. It's hard and it's scary, but if you push yourself to do/say/think the things that you're afraid of (but really want), then you'll slowly but surely cross items off that mental list of things that make you feel insecure.

Battling insecurity isn't about getting to the point where you never feel insecure about anything, because I just really don't think that's how life works. Insecurity will probably be a constant battle for most of us, if not all of us, but the more you overcome your insecurities and learn how to use them to your advantage, the better off you'll be. As time passes, you'll become insecure about fewer things, and the things you do spend energy feeling insecure about will become far less trivial. Just accept the fact that insecurity isn't 100 percent bad for you, and that the lifelong process of overcoming it is going to make you a more beautiful human being.

8. "I Can Feel Insecure And Still Be Happy"

I only recently realized that these two seemingly conflicting emotions don't have to be mutually exclusive, and I think it might completely change my life. We've already established that feeling insecure isn't inherently bad, so there's no reason you can't feel happy while also feeling insecure, right? Right. So give it a shot!

Just because you're insecure doesn't mean that you're not an awesome person, and you definitely shouldn't be waiting until you've got it all together to give yourself permission to like who you are. Like yourself in spite of your insecurity, and maybe even because of it. Being insecure and not allowing it to run your life takes real courage — so be proud of that. Don't forget to celebrate all your good qualities, because you can be insecure and still be a really cool person. Trust me, I'm speaking from experience here.

A lot of insecurity has to do with body image. If you're like me, you probably aren't as positive toward yourself as you are toward other people — but you should be, and so should I. Lately, when I start to mentally criticize my body, I cut off the negative voice inside my head with this statement: "Liz, you're gorgeous." It sounds cheesy, but so far, it's actually really been helping me feel better about my body. Give it a try the next time you're feeling insecure about your body, because you really are gorgeous. We all are.

Insecurity can be debilitating, but it doesn't have to be. Just because you don't feel like you are capable of something great doesn't mean you aren't, and it certainly doesn't mean you shouldn't go for it. Because as we've already discussed, feelings don't always accurately express fact. Actually, in my experience, they almost never do. So the next time your insecurity is next-level immobilizing, just remind yourself that you are capable of doing whatever it is that you want and/or need to do. In fact, chances are, you've totally got this.