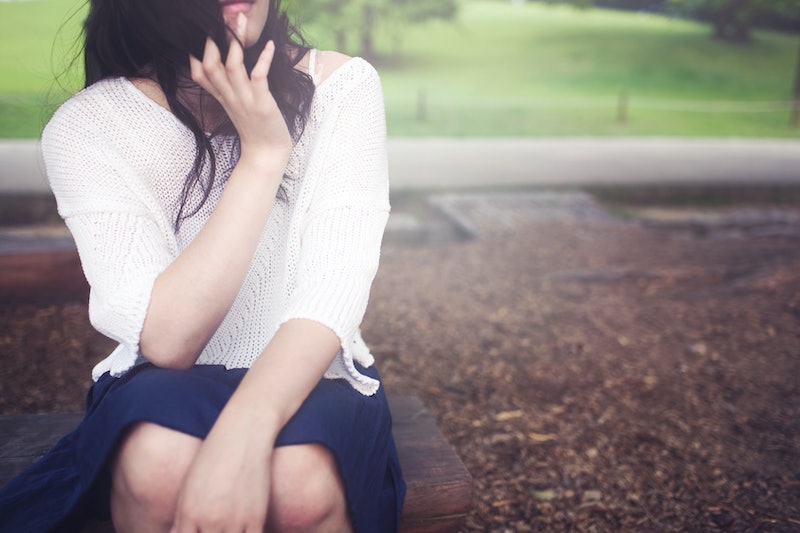 Many of us know about chlamydia, gonorrhea, and herpes — thanks, health class! — but what is trichomoniasis, and why has no one ever heard of it? First off, trichomoniasis, or "trich" for short, is the most common curable STI there is, according to the Centers for Disease Control and Prevention (or the CDC). If you're infected, you don't usually have any symptoms, says the CDC — 70 percent of the 3.7 million people in this country who are infected are asymptomatic. But if you do have symptoms, they aren't pleasant or comfortable at all. Since it's on the rare side to exhibit symptoms, though, trich can be hard to treat. "Without treatment, the infection can last for months or even years," says the CDC. Bad news.

If you have trich, it may be easier to get or spread other STIs. "Trichomoniasis can cause genital inflammation that makes it easier to get infected with the HIV virus, or to pass the HIV virus on to a sex partner," says the CDC. According to the Mayo Clinic, trichomoniasis is caused by a parasite — "a one-celled protozoan, a type of tiny parasite that travels between people during sexual intercourse," they say. The protozoa, by the way, are Trichomonas vaginalis, says the American Sexual Health Association. It's definitely not awesome on any level, but it's weird that no one seems to know anything about this STI. To set the record straight, here are some basic facts about trich.

1. What Are The Symptoms?

For the less lucky 30 percent of those infected with the STI who exhibit symptoms, which can come and go, mild irritation to severe genital inflammation can occur, says the CDC. It's hard to diagnose, because, though some may show symptoms within five to 28 days of infection, it's more common to have no symptoms at all, or develop them much later, the CDC says.

2. Why Have You Never Been Screened For It?

Well, that's a good question. According to Converge Diagnostic Services, the CDC now recommends that women are screened for trich along with other common STIs when they visit the OB/GYN. But this is a fairly new recommendation, so you may have to specifically ask at your next trip to the gynecologist.

Well, it's not awesome, but men are usually asymptomatic, says the Mayo Clinic. If they are unlucky enough to have symptoms, they include "itching or irritation inside the penis, burning after urination or ejaculation, or some discharge from the penis," according to the CDC. Sex can feel unpleasant, they add, which, if any of these symptoms are happening, makes perfect sense.

Symptoms for women are similar to those for men, including "itching, burning, redness or soreness of the genitals, discomfort with urination, or a thin discharge with an unusual smell that can be clear, white, yellowish, or greenish," says the CDC. Also similar to men: Sex can be unpleasant. The Mayo Clinic notes that discharge can be "profuse," and adds gray to the list of colors in which such discharge can appear.

5. How Is Trichomoniasis Diagnosed?

Symptoms might tip you off to the problem, but a lab test and visit to the doctor is necessary to confirm any suspicions, says the CDC. Trich "can be confirmed by looking at a sample of vaginal fluid for women or urine for men under a microscope," says the Mayo Clinic. "Growing a culture used to be the way to diagnose trichomoniasis, but newer, faster tests, such as rapid antigen tests and nucleic acid amplification, are more common now."

6. How Is Trichomoniasis Treated?

It's super easy to treat: Trich can be fought off with a single megadose of antibiotics — either metronidazole or tinidazole, says the CDC. But it's possible to get it again — in fact, you have about a 20 percent chance of reinfection. "About one in five people get infected again within three months after treatment, says the CDC. "To avoid getting reinfected, make sure that all of your sex partners get treated too, and wait to have sex again until all of your symptoms go away (about a week)," they advise.

7. How To Avoid Trichomoniasis?

Use latex condoms, the CDC suggests, though that's not always going to help: "Condoms don’t cover everything, and it is possible to get or spread this infection even when using a condom," they say. As usual, the best advice anyone can possibly give is to discuss sex before having sex. An honest conversation about STIs and sexual history can be awkward, but it's worth it. That said, it's impossible to ensure that you're avoiding trich completely, since your partner might not even know that they have it.

8. What Are The Risks Associated With Trichomoniasis?

If you have symptoms, it's definitely not comfortable, but it's especially bad for pregnant women. According to the Mayo Clinic, pregnant women with trich may "deliver prematurely, have a baby with a low birth weight," or "transmit the infection to the baby as he or she passes through the birth canal." And if you have trich, it "appears to make it easier for women to become infected with HIV," the Mayo Clinic adds.