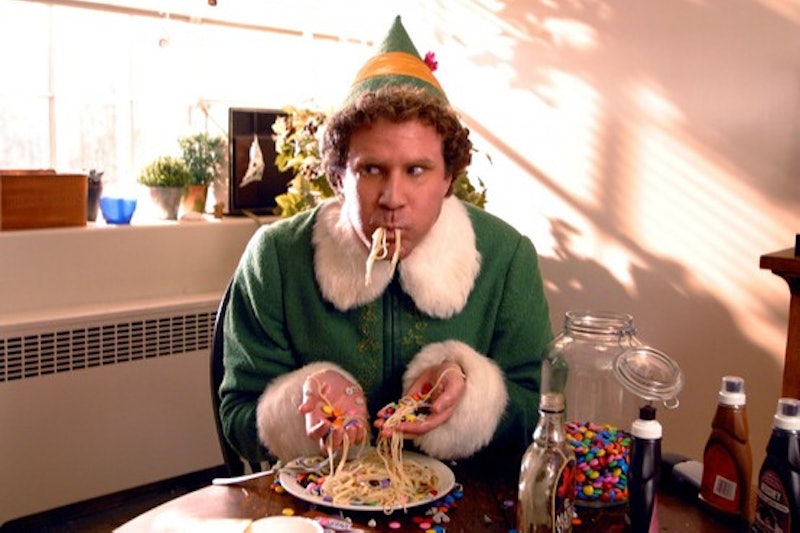 Around this time of the year, we like to let our inner child roam free and curl up with delightful Yuletide movie selection of ABC's 25 Days of Christmas. But, wait, you've tuned into ABCs 25 Days of Christmas year after year, to many of the same movies. ABC's 25 Days of Christmas is as much of a staple of the holiday as watching a Charlie Brown holiday special, you know? It's got the comfort of routine, but maybe sometimes you want to shake things up a little. What can you possibly do to make the season brighter? Well, alcohol helps, so how about an ABC Family movie Christmas drinking game?

I meeeeean, I guess it might be strange to hear the words "family," "Christmas," and "drinking game" in the same sentence, unless you're used to taking a sip of eggnog every time an extended family member asks if you're seeing someone this season (cheers). Vague inappropriateness aside, I think it'll freshen up any sort of marathon, and it's really simple because basically all Christmas movies have some clear patterns. They're pepped with all the same buzzwords, they all have happily ever afters, and they all pair well with spiked eggnog... or any other seasonal drink.

So, pick your poison and curl up on the IKEA futon in your apartment. These quick-and-easy rules for any ABC Family movie drinking game; just make sure your eggnog has more eggnog in it than alcohol for some of these, OK?

1. One Sip Every Time Someone Says "Christmas"

Baby sips, because, if you really commit to a bunch of movies, you could get wasted on this alone.

2. One Sip Any Time A Non-Santa Puts On A Santa Costume

You'll be swilling some merry eggnog like it's Santacon up in here.

3. One Sip Any Time A Christmas Carol Plays

"Christmas carol" is here defined as something so old that it's (plausibly) public domain. Think "Jingle Bells," "Deck The Halls," and "Joy To The World."

These I tend to find more sparing, but, just to give you an idea, you want to take two hearty sips every time something like "Christmas Wrapping" comes on.

5. Chug For Five Seconds When/If The Titular Song Comes On

Basically, you're gonna have a blast when you get around to watching How The Grinch Stole Christmas or Rudolph The Red Nosed Reindeer.

6. Two Sips If Someone References Another Christmas Classic

Historically speaking, if there's one bitter character in your modern Christmas movie (and there always is), chances are that somebody will refer to them as a Grinch, or they'll spout out an ironic "Bah Humbug!" before the film's end. Keep your eyes peeled for less obvious references, though.

7. One Sip If Someone Says That Christmas Is Basically Ruined

It doesn't have to be a literal "Christmas is ruined," although I know that there are plenty of movies that have used that very line.

8. Two Sips If Anything Explodes, Catches On Fire, Or Basically Gets Damaged In Any Soul-Crushing Way

Because it just isn't Christmas without any sort of near-fatal accident... or three.

For this one, I want to stress that it has to be the real Santa. Ahem.

10. Two Sips Whenever Someone Gets Christmas Redemption

11. Chug For Five Seconds When Someone Realizes The True Meaning Of Christmas

So, like, when the Grinch's heart grows three sizes that day, there's no doubt that your liver will shrink in concern.

That's all there is to it! Have fun, drink responsibly, and try not to get a holly jolly hangover!