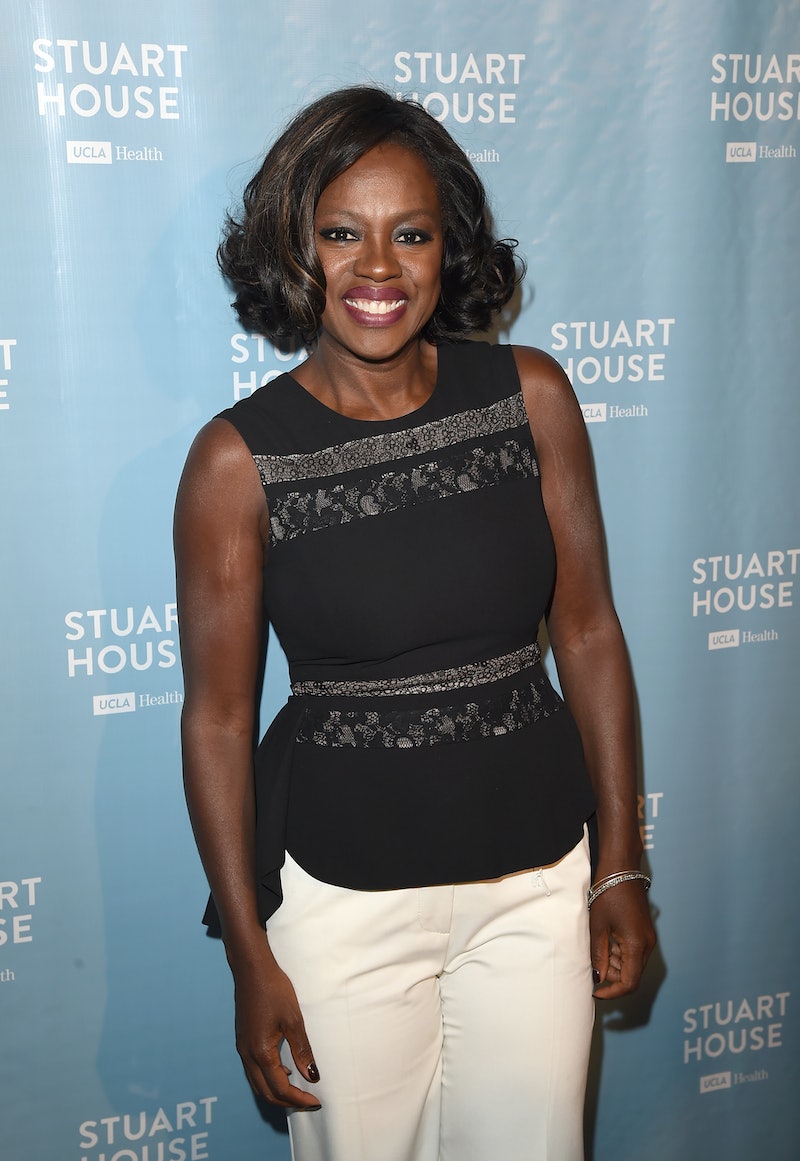 With the Golden Globes nominations being announced on December 10, it's time to predict who might appear in the list, and who really deserves to be nominated. I personally think that Viola Davis could win a Golden Globe in 2016 for her performance in the Shonda Rhimes-vehicle How To Get Away With Murder. In September 2015, Viola Davis made history by becoming the first African-American to win the Emmy for Outstanding Lead Actress in a Drama. Although Davis wouldn't be the first African-American actress to win a Golden Globe in this category — Regina Taylor won the award in 1993, and Gail Fisher won in 1973 — there are many reasons why Davis is the perfect nominee, and, if she went on to win, it'd be every bit as historic as her Emmy success.

Davis, of course, plays Annalise Keating in How To Get Away With Murder, the law professor who's an expert in winning murder cases. The role has been totally shaped by Davis's fierce, vulnerable, and unpredictable performance. The series is all the better for having someone of Davis's calibre in it (she's been nominated for Oscars, after all!), and it's another smart move on the part of Shonda Rhimes who is changing television for the better in basically every way. All hail Shondaland! So could 2016 be the year Viola Davis wins a Golden Globe?

The role that Viola Davis plays in How To Get Away With Murder is groundbreaking for so many reasons, and her flawless performance certainly deserves recognition during this year's award season. In an interview with Variety, speaking about her role as Annalise Keating following her Emmy win in 2015, Davis said, “It’s given me a way to show womanhood and a leading lady in a different way — and given me a place to shine — than I had in film.”

As the show's lead, Davis is centre stage every week, and she can certainly hold her own. Annalise Keating is a total boss, smartly in control of her destiny and everything around her, even though sometimes things don't go to plan. In fact, it's the way in which the character picks herself back up when she's fallen that defines who she is — strong but not afraid to be weak.

When speaking at the Television Critics Association, Davis said, "There is no way in the history of film or TV that you've seen a character like this played by a black woman who looks like me. This is progressive. This is a first." Obviously, it seems completely crazy that this is the case in 2015. If anything, Davis has proven that her lead role is not only deserved, but couldn't have come soon enough. Davis is every bit as captivating on the small screen as she is at the movies. She deserves to get a Golden Globe nomination, and go on to win the award, full stop.

As the last time an African-American woman won a Golden Globe in the Best Performance by an Actress in a Television Series category was in 1993, and before that in 1973, Viola Davis winning the award in 2016 would not only be long overdue, it would hopefully set a new precedent. Awards ceremonies are so often whitewashed and don't represent the diverse and exciting TV landscape we have right now. This needs to be rectified immediately, and a win for Davis would be a start. Plus, she's killer in this role and that deserves some recognition.

More like this
Everything To Know About The HBO Max & Discovery+ Streaming Service Merger
By Brad Witter
Stephen Graham’s Wife Plays A Vital Role In His Career
By Emma Madden and Sophie McEvoy
What’s New On Netflix: 'Bridget Jones’s Diary' & 'Monster-in-Law'
By Arya Roshanian
Here’s Everything Coming To & Leaving Netflix In August
By Jake Viswanath
Get Even More From Bustle — Sign Up For The Newsletter