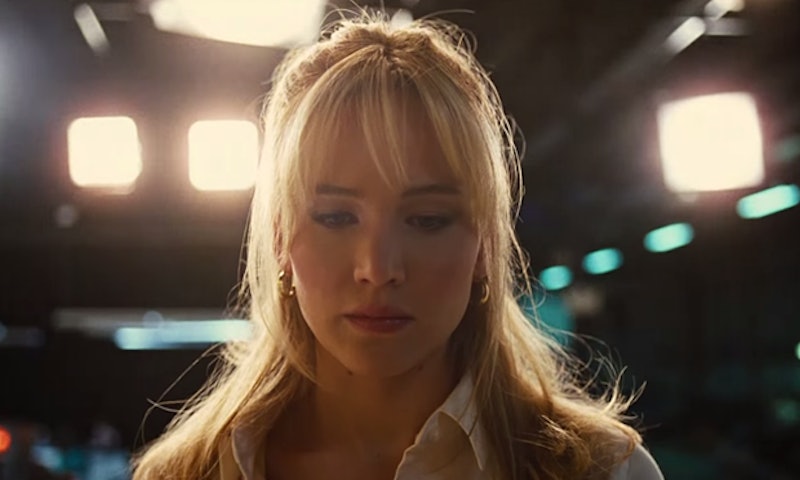 Jennifer Lawrence and director David O. Russell have been on a winning streak these past few years. With Lawrence’s Best Actress Oscar for Silver Linings Playbook, Russell's Golden Globe for American Hustle, and Best Picture nominations for their films, it's as if these two were destined to work together. Yet their latest collaboration, Joy, has been earning some ire from viewers, for the very thing that people once praised so strongly: Lawrence starring in a Russell film. While her acting in Joy has been acclaimed, the fact that she, 25, plays a divorced mother of three in her 30s, has not gone over as well; as ScreenCrush said, “This part was meant for the Jennifer Lawrence of 2025, not the one of 2015.” Many believe that she's been miscast due to her young age, and it's not the first time people have had this complaint about a Lawrence-Russell collaboration. In American Hustle, she, 22 while filming, played a mother of a young son; in 2012's Silver Linings Playbook, her character was a widow.

While American Hustle and Silver Linings never explicitly said Lawrence's characters' ages, Joy does; the movie begins with Lawrence as a 34-year-old, and she ages throughout the film. And even in the others, there are clear hints at what her age is supposed to be. In the novel on which Silver Linings is based, Lawrence's character is 39. The idea that the actress, at 22, was not only widowed but also involved with the 37-year-old Bradley Cooper, was certainly questionable, albeit not beyond the realm of reality. Yet audiences went for it, suspending disbelief in exchange for the charm of the duo's courtship. Things got even less realistic, however, in 2013’s American Hustle, in which Lawrence acted alongside colleagues way into their 30s. Her character, Rosalyn, an unhappy Long Island housewife with a son, seemed intended as a woman in her mid-30s, yet it was Lawrence, barely in her 20s, who took it on.

The issue lies not only with Lawrence, of course. She's just one example of young female actors who are offered roles that could easily be played by women a good decade or two older than them. And whether they play parts of their actual age or a decade above, in many cases, their male co-stars are significantly older. As a 2014 study entitled It’s a Man’s (Celluloid) World reported, “Female characters remain younger than their male counterparts. The majority of female characters [in 2014 films] were in their 20s (23%) and 30s (30%). The majority of male characters were in their 30s (27%) and 40s (28%).” Vulture, meanwhile, analyzed the ages of 10 leading men against their female love interests, and the results were evident in their headline: “Leading Men Age, But Their Love Interests Don’t.” Lawrence, plus actresses like Emma Stone and Scarlett Johansson, are miscast often, and as the study proved, in many of those cases, paired with substantially older men.

A young actress playing a woman who is supposed to be in her mid-30s and beyond — and then, quite possibly, getting paired with a romantic interest significantly older — not only hurts the authenticity of her performance, but also adds to the ongoing issue of Hollywood ageism. Older actresses might be finding themselves losing out on roles to younger stars; Lawrence's role in Joy, for instance, could easily have been played by Elizabeth Banks or Marisa Tomei. Actors like Kristin Scott Thomas and Jane Fonda have spoken out about the lack of roles available for older actresses, and the frustration that comes with losing parts to a pool of ingenues that are in their early- to mid-20s but have that “ageless quality” that Hollywood just adores.

It's not the young actresses' faults, though. It's a lot to ask of any star to turn down a role she thinks is good, especially one that might earn some gold come awards season. Women have a hard enough time finding significant roles as it is, so to reject a meaty role or question the age of their male co-stars might seem like something likely to lose them the offer to begin with. They're clearly not naive about the situation they face, as even Lawrence recently told The New York Times about her casting in Joy, “It’s not like I was old enough for American Hustle. And I was way too young for Silver Linings [Playbook]. That’s why I almost didn’t get it.”

And while directors certainly take some blame — Russell told The Wrap that he believes Lawrence “kind of has an ageless quality about her, which is remarkable" — it's not as simple as that. The problems of miscasting and ageism are complex and persistent throughout Hollywood, stretching wider than just one actor/director pair. Stars like Lawrence may give compelling performances regardless of their on-screen age, but it'd be refreshing to see them take on roles actually meant for their real-life years. How interesting would it be for Lawrence and oft-miscast peers like Stone, Kristen Stewart, and Anna Kendrick, to play college students, or women just joining the workforce in their early 20s? These actresses may be a joy to watch no matter their roles, but it's not helping them, nor older stars, by getting so often miscast.