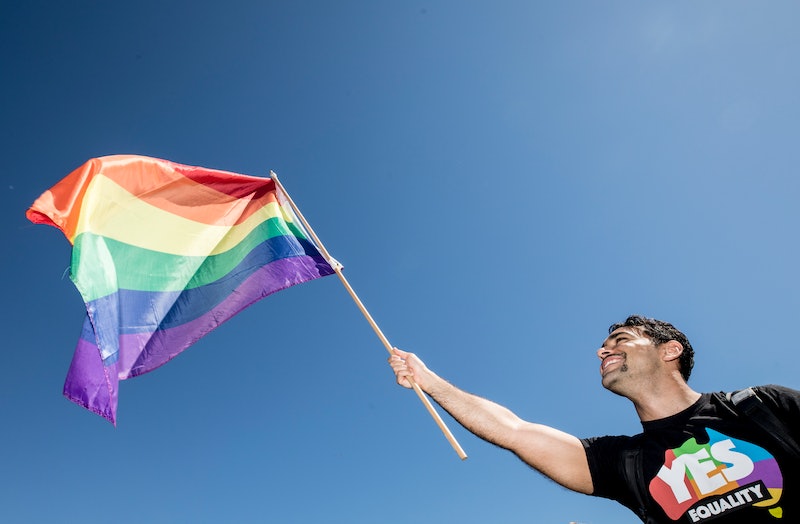 Rejoice, Android users, for the Android emoji update has finally been released! No longer will messages from your iPhone-owning friends read as a series of empty boxes, forcing you to use context clues to figure out where you're meeting for dinner. No longer will you have to jealously watch other people use the taco emoji willy-nilly without realizing how good they have it. Most importantly, no longer will you have to settle for texting gender-neutral blob couples and heteronormative families, because the Android update finally includes LGBT emoj.

In the past, options for LGBT Android users have been limited, to say the least. Although the couple emoji, which featured two yellow blobs and a heart, was harmless in its neutrality, the only family emoji depicted a man, a woman, and a child — not exactly the most inclusive choice. Of course, the same was true of Apple users as well until LGBT emoji became available on iOS systems in April of this year; at the time, though, the options still did not exist for Android devices. The latest Android update, however, contains over 200 new emoji, including a diverse range of couples and families. The blobby couple has been replaced with man-woman, woman-woman, and man-man pairs, and that solitary family emoji is now available in all kinds of permutations: Two men with a daughter, two women with two sons, a man and woman with a son and a daughter, and more.

It's still lacking a single parent family option, however, which might point us in the right direction as to where our emoji designs need to go next. Skin tone options also remain absent; apparently in the world of these particular emoji, everyone is taxi yellow.

At this point, some of you may be wondering why the inclusion of LGBT emoji is such a big deal. After all, emoji are merely cute little adornments for your text messages; surely there are more pressing aspects of LGBT representation to worry about. But while it's true that this is hardly as important as ending bi erasure or increasing LGBT representation in entertainment, the advent of LGBT emoji is indicative of something larger than just giving Android users more progressive options. In the same way that the addition of racially diverse emoji earlier this year represented a move toward inclusiveness, LGBT emoji are a sign of how attitudes toward the community have changed, and continue to change, for the better.

No, emoji aren't the next battleground for LGBT equality, but there's no denying that representation does count. Just look at the way people lost their minds over the addition of the taco emoji: As vitally important to society as that may have been, it's not quite as meaningful as LGBT rights, but people treated it like it was the dawning of a deliciously new era. If that doesn't speak volumes about the ubiquity of emoji our daily lives, I don't know what does.

That being said, the Android update contains both the new taco emoji and LGBT representation — why not celebrate them both by grabbing your partner and some tacos? It's a win-win.

More like this
Behind The Hilarity Of The "POV: You Walk Into My Room" TikTok Trend
By Lexi Inks
Why TikTok Is Flooded With Controversial Videos About "Pick Me Girls"
By Courtney Young
The 19 Best Tweets & Memes About Bisexual Awareness Week
By Lexi Inks
How To Turn Off Night Mode On Your iPhone Camera
By Emma Carey
Get Even More From Bustle — Sign Up For The Newsletter