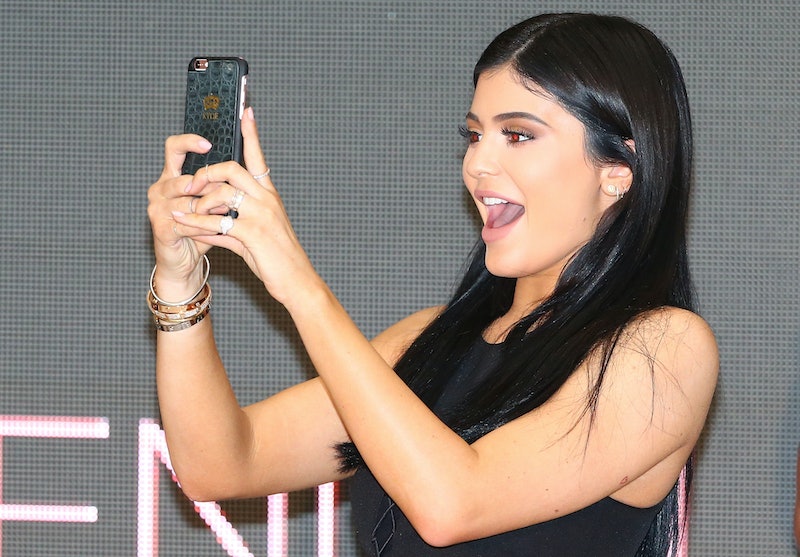 Forget the mirror selfies, the pouty lips, the stiletto nails, and the fabulously crop topped street style! While those are usually the things that fill her Instagram feed, Kylie Jenner posted a body positive pic of her thigh scar and it was a powerful, high impact statement for the reality star to make. I am really impressed with the fact that the teen showed off her scar and did so with a sweet caption.

Jenner sustained the scar when she was just five and playing a game of hide and seek with her big sister Kendall. We don't see the scar too often, but in this particular Instagram pic, it's on full display. Scars give us character, remind us of life lessons, and are reminders of who we are and what we've endured. I love that Jenner, who always seems so perfectly put together on her Insta feed, is owning her scar.

The reason this image is such a big deal is the fact that Jenner does wield influence over her millions of minions. This could inspire them to love and show off their scars, too.

It's also a reminder that despite the public and media perception, she's not perfect. Besides, perfect is totally boring. And Kylie Jenner is anything but boring, especially when she is raising eyebrows with things liker her Interview cover shoot.

It's also important because Jenner has a big enough bank account where she could easily have some sort of plastic surgery to "fix" the scar. She can also apply expensive, extensive cosmetics to conceal it. But she hasn't gone that route and for that, I applaud her.

Jenner was twinning with her bestie and her scar was also fully visible. She's embracing it.

Going mostly makeup-free is also a way to be body positive and to love yourself "as is," especially since she is so known for those plush lips.

Sometimes it's easy to forget that despite her fame and fortune, Jenner is still a teenager who deals with a lot of haters, which is also a form of bullying.

She also shared this post from a follower, putting a positive story on the radar of many. This was a case of Jenner using her enormous fame for good.

Jenner earned plenty of deserved criticism for promoting ableism with her wheelchair photos, which elicited some powerful responses. But I have to give her props for celebrating her huge thigh scar, as it could be a source of inspo for others. It's a step in the right direction.