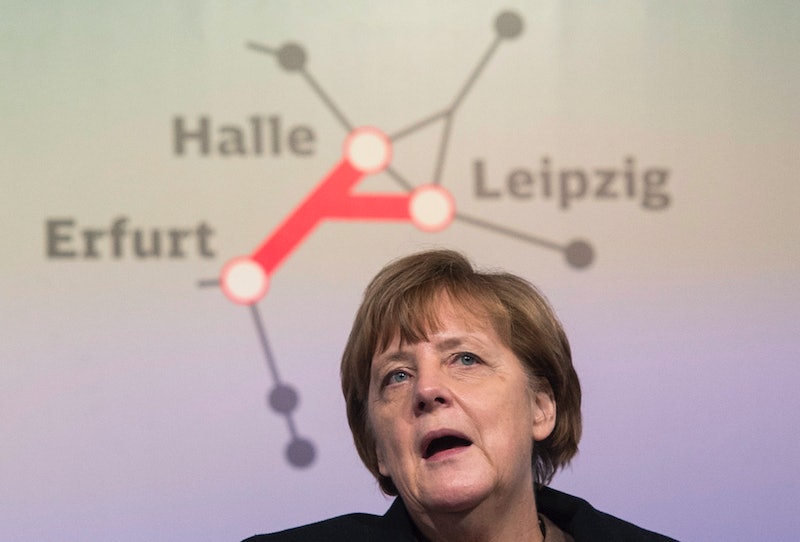 In theory, Person of the Year is awarded to people "who affected the news and our lives, for good or for ill." Women have been included in the award alongside others before, such as last year's collective Ebola Fighters and Gen. Chiang Kai-shek and Soong Mei-ling as a couple in 1938, but it's still shockingly rare for a woman to receive the honor without having to share her accomplishment. Then again, perhaps it's not so shocking; although the award has been doled out annually since its inception in 1928, it wasn't until 1999 that the magazine changed the title from "Man of the Year" to the gender-neutral "Person of the Year." Women have come close to the award in the past — Merkel was joined by Cailtin Jenner in this year's short list, and previous runners-up have included women from Malala Yousafzai to Taylor Swift. For whatever reason, though, they rarely seem to make the final cut.

So: How many women have been named Person of the Year? Chances are, you're not going to like the answer: In more than 85 years, only four solo women have received the honor. Four. If you include couples and groups where women were specifically named, the number shoots up to... a measly eight.

Fortunately, TIME acknowledges that there's a problem. "The label of Person of the Year tends to favor people with institutional power... It’s a lot easier to make news from an address like the White House, the Kremlin or the Vatican," Radhika Jones writes in this month's issue. Of course, blaming the status quo for your choices accomplishes little, but at least they recognize their own bias. Hopefully, next year will see another female addition to Person of the Year, but until then, let's celebrate the following women who were recognized in the past.

Simpson's romance with the Prince of Wales was controversial from the beginning, but especially after Prince Edward became the only monarch in English history to willingly step out of the line of succession — all for the woman he loved. "The news that the King, as King, wanted to marry Mrs. Simpson was the final culmination of a tide of events sweeping the United Kingdom out of its cozy past and into a more or less hectic and 'American' future," TIME wrote. Simpson and her husband lived out the rest of their days in Paris.

One of TIME's more controversial decisions, Soong Mei-ling was named Person of the Year along with her husband, General Chiang Kai-Shek, in 1937. "No woman in the West holds so great a position as Mme. Chiang Kai-shek holds in China," the magazine wrote.

After her father's death in 1952, Elizabeth II ascended to the throne of England. "The British, as weary and discouraged as the rest of the world in 1952, saw in their new young Queen a reminder of a great past... and dared to hope that she might be an omen of a great future," TIME wrote. 60 years later, she's still ruling England with an adorable fist.

With second-wave feminism in full swing, TIME wrote that "enough U.S. women have so deliberately taken possession of their lives that the event is spiritually equivalent to the discovery of a new continent." Although the honor was dedicated to all American women, the magazine specifically profiled women like journalist Carol Sutton and Connecticut governor Ella T. Grasso.

Not only was Aquino the first female president in Asia, but her defeat of dictator Ferdinand E. Marcos represented a restoration of democracy to the Philippines. "Whatever else happens in her rule, Aquino has already given her country a bright, and inviolate, memory," TIME wrote. "More important, she has also resuscitated its sense of identity and pride."

In 2002, three women became public figures for acting as whistleblowers in their respective organizations: Enron vice president Sherron Watkins, who asked the chairman to curb the company's unethical accounting practices; FBI staff attorney Coleen Rowley, who brought attention to the FBI's lapses before 9/11; and Cynthia Cooper, who exposed fraud at WorldCom.

Last year was dominated by an ebola epidemic that caused global panic; although the outbreak began in West Africa, it seemed only a matter of time until it spread throughout the world. However, the tireless efforts of responders like Ella Watson-Stryker and Salome Karwah contained the disease — and earned them TIME's Person of the Year. (It should be noted that the other three people featured on TIME's cover were all men. Duh.)

After serving as Chancellor of Germany for a decade, Merkel received Person of the Year for her vital role in Europe's crises this year: Greek debt, a swelling tide of refugees, and the fight against ISIS. "Leaders are tested only when people don’t want to follow," TIME editor Nancy Gibbs wrote. "For asking more of her country than most politicians would dare, for standing firm against tyranny as well as expedience and for providing steadfast moral leadership in a world where it is in short supply, Angela Merkel is TIME’s Person of the Year."

More like this
Photos Of Boris Johnson Drinking At A Downing Street Lockdown Party Have Surfaced
By Bustle UK
Taylor Swift, Kerry Washington & More Speak Out On Uvalde Mass Shooting
By Jake Viswanath
President Zelensky Spoke Out On Ukraine's Chances Of Hosting Eurovision Next Year
By Sam Ramsden
How To Support Gun Control Reform Right Now
By Morgan Brinlee and Carolyn Steber
Get Even More From Bustle — Sign Up For The Newsletter