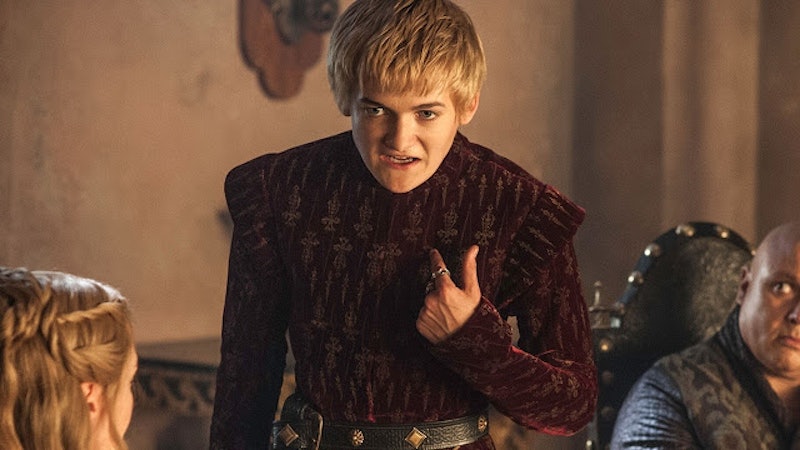 Game of Thrones' King Joffrey is, for all intents and purposes, a self-obsessed little monster. Thankfully it seems his real-life counterpart Jack Gleeson, is not. Far from it — as evidenced by his truly (and this isn't hyperbole, we swear) brilliant takedown of celebrity culture and the ramifications of its obsessive, perverse nature. The boy king is a smartypants of the most thoughtful order: did anyone anticipate that? Don't answer that.

Because — as Gleeson's speech at Oxford University points out — the fact that such a quandary is posed is part of the problem. Upon entering the mega-fame stratosphere that the popularity of the HBO series catapulted him into, the 21-year-old had intelligent and scathing insights into the reasoning behind this culture of obsession, and from where it might stem. "Since the show has aired, I've been given an insider look into an ever-pervasive yet often mysterious aspect of society," Gleeson stated. Turns out? He's not so much a fan. "Strangers on the street now call me Jack and my public image is democratized by fans and institutions alike on the Internet." And we agree with Gleeson: it's a pretty not-great thing.

Oh, but that just sounds like complaining, you assert. But you'd be wrong and also jumping the gun a bit. Gleeson is quick to show gratitude for the success he has and what it has provided him — "opportunities which I see as truly once in a lifetime" — while simultaneously questioning the necessity for the extent of it.

The actor asserts that the cons of this elevation far outweigh the pros, a.k.a. the idealized parts that people on the outside love to harp on. "Celebrities seem by a huge amount of people and, certainly by myself for awhile, as the pinnacle of success. It is revered almost religiously — both the institution and its quickly growing member base. Indeed, the apotheosis of celebrity is not just confined to the worship of movie idols, pop stars, sports heroes or even reality TV stars, we have bloody celebrity chefs, authors, comedians, politicians, intellectuals, scientists, business people, cheesemongers, and milliners who can simply stick out their faces at us on advertisements, talk shows, and magazine covers."

He also calls out the publicity-centric nature of it all for what it really is: advertising for the sake of capitalistic gains: "This reverence and invasion is often welcomed and indeed fostered by a great percentage of the public," whereas he, after having experienced it first-hand, "detested the superficial elevation and commodification of it all, juxtaposed with the grotesque self-involvement it would sometimes draw out in me."

Gleeson lays down the real talk regarding how messed up the whole nature of celebrity has become. By simply by being an actor that lucked into a bit of success, Gleeson was thrown into the machine quite unsuspectingly, told he needed to, essentially, sacrifice his own feelings because that's just how this shit works. "Unbeknownst to me, [I'd] signed an invisible contract which required me to enter into a strange new echelon of society," Gleeson explained. "People suddenly wanted to take pictures of me on the street, and journalists were interested in what sort of socks I preferred. It was an atmosphere from which I instantly wanted to retreat." Unfortunately for him, there's an overwhelming opinion that anyone scooped up by the celebrity machine must relent to the culture, no matter what their feelings on it are.

We've all seen how bad it can get (cough cough Britney, Lindsay, Amanda Bynes), but still we as a society are unwilling to accept our own role in it. But before you call Gleeson a brat for detesting something that's so revered by society, it's important to understand the effect it had on him and his life. He didn't like the person he was in those moments (the aforementioned self-involvement). And, frankly, it's really not fair that he doesn't have a choice in the matter, considering this is his own life, image, and emotional that are caught in the crossfires. Is it really all that fair to expect someone to give their own autonomy away just because we're fascinated by them?

There are always exceptions to the rules, of course (famewhores are real!), but Gleeson's claims are well-researched and backed up by a lot of data. He recalls the evolution of "celebrity" back to the Romantic era, and put in such terms, the changes are drastic. Celebrity has indeed evolved from the place it once began — notoriety based on an ability or skill that benefits the community in order to, essentially, teach the rest — to something else entirely. When the Western world switched over to a society of consumption rather than production, it evolved into a breeding ground for commodification of one's image and talents for the sake of consumption. The only problem? It turns celebrities into "something consumable, and therefore disposable," as Gleeson puts it. And when something's disposable, we don't care as much, and take it for granted, thinking it's something for us that serves a function that only relates to what we can get out of it, what it can do for us. In a celebrity's instance, that means entertain.

Reducing celebrities down to their image alone removes the human aspect in a way that desensitizes us consumers to the very real emotions and feelings the person experiences as a reaction to the obsessive nature of celebrity consumption. Before you know it, that "person" contains no reference to the actual person shilling it. "What's ironic is that you see celebrity endorsing things like, you know, musical tampons and appearing in advertisements for lavender scented teeth whitener or something. Wielding goods whose sell-by dates [will] ironically, probably, outlast theirs," Gleeson remarked. "Having one's image, and effectively life, democratized, dehumanizes and sometimes objectifies it into an entertainment product. What sort of valuation of the ego would one have once you've let it been preyed upon by the public for years and years? Perhaps, it becomes truly just skin and bones." It's a thoughtful and intelligent critique — and one you should remember next time you leaf through your tabloid of choice in the grocery store checkout aisle.

More like this
15 Photos Of 'The Last Of Us' Star Pedro Pascal That Cement His Zaddy Status
By Radhika Menon
'GoT' Star Emilia Clarke Says She "Just Can't" Watch 'House Of The Dragon'
By Brad Witter
Britney Spears Shared The Real Reason She Shut Down Her Instagram Account
By Brad Witter
Twitter Is In Awe Of Taylor Swift’s “Lavender Haze” Music Video
By Jake Viswanath
Get Even More From Bustle — Sign Up For The Newsletter
From hair trends to relationship advice, our daily newsletter has everything you need to sound like a person who’s on TikTok, even if you aren’t.