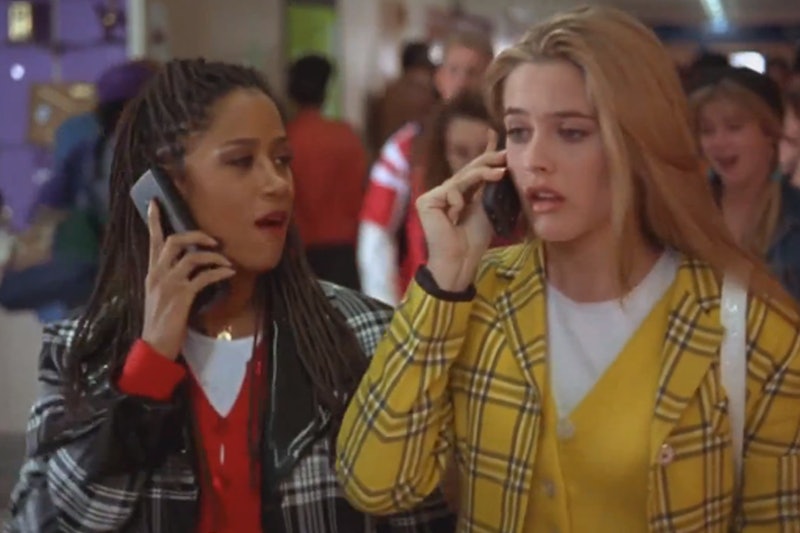 Every age is in part defined by its slang. The 16th century had “Zounds!”; twenty years ago had “Cowabunga!”; and these days, we’re all yelling, “YASS!” Although the slang terms that evolve from century to century and decade to decade may all sound very different, the sentiments that slang usually expresses — from excitement to outrage to indifference — generally stay the same, and we can find equivalencies between our current cool-speak and words from the past that now seem dated and ridiculous.

So just how would the 90s translate our modern slang? Although American slang of the last few years has been highly influenced by technology and social media networks that we could barely have imagined 20 years ago, the core ideas that we’re expressing with our hashtags and text-speak are human universals that would have made sense back then, too: “FOMO” is a feeling teens of the 90s knew well back in the day, even if we didn’t have a word for it, and “No chill” is yet another variation of 90s terms like “chill out.”

Read on for 12 '90s equivalents to contemporary slang. Not all of these are exact translations — slang can be a subtly-shaded thing, after all — but if you put the Pretty Little Liars crew in a room with Cher, Dionne, and Tai, with this handy dictionary in tow, they’d find a way to understand each other.

Example: “These chocolate sandwich slices are GIVING ME LIFE.”

'90s translation: “The bomb!”, as in, “These chocolate sandwich slices are the bomb!”

Example: “I’m going to get turnt up at the bar tonight!”; “This night is turnt!”

'90s translation: “Crunk.” “Crunk” actually works as a pretty solid equivalent to “turnt,” in a number of contexts. It can mean “really drunk,” as in “I’m going to get crunk at the bar tonight!”, as well as “excited or happy.” Like “turnt,” “crunk” can be applied to both a person and an event (“This night is crunk!”).

If this phrase sounds familiar, it's because Cher Horowitz used it as an excuse for tardiness in Clueless. And if Clueless were remade right now,* Mr. Hall would be equally befuddled by “Mr. Hall, it was Shark Week. I had to haul ass to the ladies,” and excuse her lateness.

* Let’s be clear: I am not recommending this. Clueless is perfection and trying to recapture its glory would be like staring into the face of God and being consumed by divine rage.

Example: “I love doing my taxes! Said no one, ever.”

Example: In any situation in which someone is awesome, that person becomes “Glen Coco,” and Glen Coco always goes.

'90s translation: “You go, girl!” To be fair, the original usage of “You go, Glen Coco!” in Mean Girls was simply a character using “You go!” in the 90s sense. But then we all realized that the addition of “Glen Coco” makes the phrase infinitely better and we kept it.

Example: Anything that requires a “Carpe diem” sentiment (sort of mixed with a hint of “Whatevs”).

Luke Skywalker approaching the Death Star: I have a bad feeling about this.

'90s translation: As a number of memes have already pointed out, “YOLO” is basically what Timon and Pumbaa are talking about in “Hakuna Matata.”

Example: “The love of my life is bae.” Or “Tortilla chips are bae.”

Example: “Eyebrows on fleek!” (of course).

Example: “Come on, the squad’s going to Starbucks.”

'90s translation: “Crew,” e.g. “Come on, the crew’s going to [insert other gathering place here. We didn’t have fancy coffee in the '90s because it was the dark times]”

Example: “I’m not wasting my time on this conversation. Bye, Felicia!”

'90s version: “Talk to the hand!” The irony is that “Bye, Felicia!” is actually from a 1995 film, Friday. So we could have been spouting “Bye, Felicia!” back then, but the phrase didn’t really go viral until a couple of years ago.

'90s version: “Boink fest.” Maybe? Obviously the idea of having sex while binge watching TV streamed in via wireless Internet is not something that remotely existed in the 90s (We are living in an age of wonders, my friends!). But I think “boink fest,” as described by Cher Horowitz, at least captures the idea of “sexy times” embedded in “Netflix and Chill.” And, hey, there’s nothing to say that people back in the day couldn’t have boink fests while also having TV marathons. They’d just have had to pause every hour or so to change out the tape.

Nevertheless if Cher was a high school student in 2015, it would make perfect sense for her to use the Netflix inspired slang when talking about Miss Geist: “What she needs is a good, healthy Netflix and Chill.”