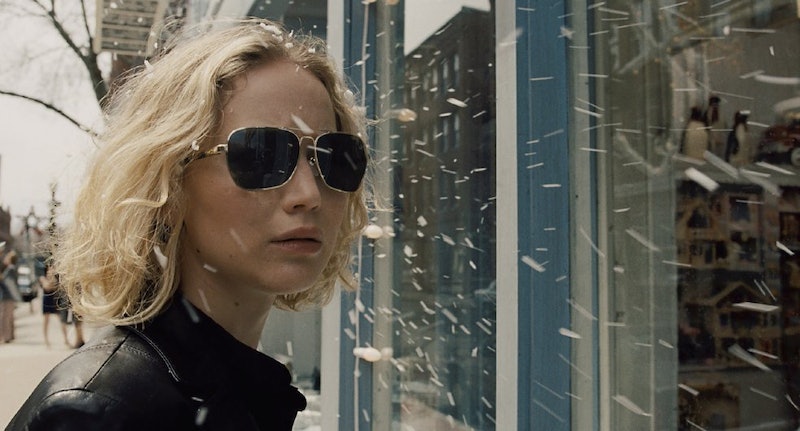 Joy Mangano is one of the most inspiring success stories you're likely to hear. The inventor and entrepreneur rose from humble beginnings to become the queen of home shopping, and now her story is getting the big screen treatment in Joy , with Jennifer Lawrence portraying her. But what does the real Joy think of Joy ? After all, Lawrence is arguably the biggest star in Hollywood, the movie reunites her with Bradley Cooper, and the movie is directed by five-time Academy Award nominee David O. Russell. So there's some pretty good pedigree behind the film, which was inspired by the story of how Mangano, as a single working mom raising her kids alone, came up with the idea for a self-wringing mop and subsequently built a home goods empire. So is Mangano satisfied with the result?

It isn't clear whether or not Mangano has seen the finished product yet, but it's abundantly clear from her social media presence that she is in favor of the film. She's begun a #25DaysofJoy campaign on her Facebook page as a countdown to the movie, which opens on Christmas, sharing a new inspiring piece of her backstory every day in December so far. She often shares motivational quotes as well on both Twitter and Facebook, often aimed especially at women, and she's been incorporating the movie into those messages as well.

Mangano also shared her excitement upon seeing the film's trailer when it was released in October. At the time, she tweeted, "I just watched the trailer for #JoyMovie! I’m so excited & know you’ll all love it! xx, Joy." So she at least loved the trailer, even if she hasn't seen the film. Mangano has also devoted a section of her HSN website to promoting the film, where she again uses the film to help inspire women. The site reads, "We’re celebrating the empowering story and spirit of entrepreneurial women everywhere with the upcoming movie JOY, only in theaters this Christmas."

It should be noted, however, that the early reviews for the film indicate that Joy is largely fictional, and only loosely based on Mangano. Her last name is never used in the movie, and neither is the actual name of her first big invention, Miracle Mop, meaning most people probably won't know that she inspired the film unless someone tells them. Yet it seems the real Joy Mangano is more interested in the movie's empowering message to women than in having her personal life story glorified by a movie star, and with that being the case, Mangano is definitely in Joy's corner.