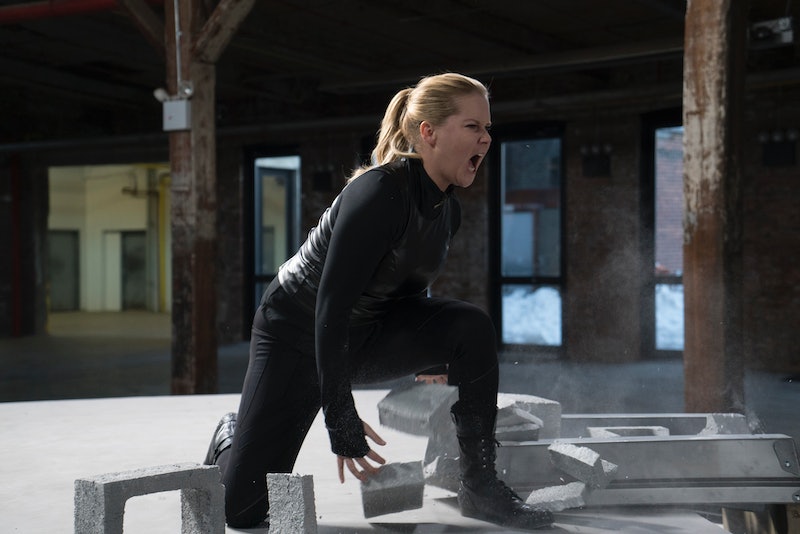 Amy Schumer fans had a reason to rejoice on the morning of Thursday, Dec. 10 when she was announced as a Golden Globes nominee for Best Actress — Motion Picture Musical or Comedy for Trainwreck. The movie was also nominated for Best Motion Picture — Musical or Comedy, but before I get too excited, I have to know why Inside Amy Schumer was snubbed by the Golden Globes. Not to be ungrateful or anything, but Inside Amy Schumer won the Emmy earlier this year for Outstanding Variety Sketch Series, so what gives, Hollywood Foreign Press Association? Does your Schumer love not extend past her movie?

Season 3 of Schumer's Comedy Central show took a strong (and hilarious) stance on feminism — and after every episode aired, at least one of the skits went viral. Not only was Schumer's humor so on-point this past season, but she was also tackling the relevant subjects of gender roles and sexuality in her own irreverent, accurate, and painfully funny way.

While the Golden Globes' format helped Schumer in earning those nominations for Trainwreck, since it has separate categories for comedy and drama films, it actually hurt her when it came to her TV show. The Globes has the category Best Comedy Series, but doesn't include a specific sketch comedy category like the Emmys does. Inside Amy Schumer could easily be nominated for a comedy series or comedy actress category outside of "sketch comedy," but it would definitely have been a less traditional route. Since the nominees for Best Comedy series went to Casual, Mozart in the Jungle, Silicon Valley, Transparent, Orange Is the New Black, and Veep, I can almost — just almost — see where the Globes were coming from. Her show's format is not in the same traditional vein as those nominees.

As for Best Actress in a Television Comedy Series, I'd venture to say that Schumer actually deserved the recognition more for Inside Amy Schumer than she did for Trainwreck. And she could have been acknowledged in that category if the HFPA had looked at Inside Amy Schumer as a viable nominee for their "Comedy Series" categories. But I guess it's time to stop all my complaining and focus on the positive — that Schumer is getting awards love this year for both her contributions to TV and film. And really, what more can a feminist ask for?

More like this
Lydia Leonard Is Setting The Record Straight
By Olivia-Anne Cleary
'Unforgotten's Brand New Character Joins At A Pivotal Moment For S5
By Bustle UK
Sandra Bullock, Girlboss Extraordinaire
By Matt Harkins & Viviana Olen
Spice Girls’ Net Worth: The Richest Member Is Wealthier Than The Rest Combined
By Hugh McIntyre
Get Even More From Bustle — Sign Up For The Newsletter