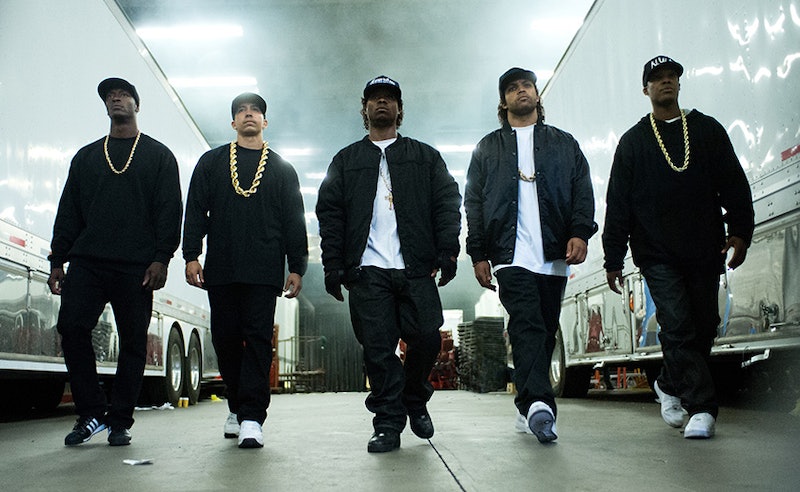 One of the most surprising things about Thursday's 2016 Golden Globe nominations was the Straight Outta Compton snub. The biographical drama charting the rise and fall of hip hop group N.W.A. was one of the most buzzed about movies this summer. What made the film's popularity even more noteworthy was the fact that it was an entirely unexpected hit. This makes the Straight Outta Compton snub even more mind-boggling. The film's opening weekend crushed it at the box office and blew away everyone's expectations by claiming the top spot.

According to Entertainment Weekly, a killer combination of awesome producers (Dr. Dre and Ice Cube) and viral marketing (you know you loved the "Straight Outta [BLANK]" meme) helped the film starring a cast of Hollywood unknowns take flight. And yet, despite the film's acclaim, it received no love from the 2016 Golden Globes. On the plus side, Straight Outta Compton did receive a SAG nomination for Outstanding Performance by a Cast in a Motion Picture, so that is something to celebrate. And of course, we can always hope that the Oscars will give it some love. But here are some reasons why the film definitely deserved some Golden Globes recognition too.

It's The Highest Grossing Music Biopic To Date

Beating out the likes of Walk The Line (2005) and Ray (2004), which both received Golden Globe nominations (and wins), according to The Hollywood Reporter, Straight Outta Compton has earned $200 million at the box office worldwide.

Considering the fact that film in general has a major diversity problem, the hope is that a worthy piece of work driven by minorities would gain the recognition it deserves. Unfortunately, that didn't happen this time. While diverse television programming continues to receive nods, film remains frustratingly behind, and nominating Straight Outta Comptonwould've helped to change that at the Golden Globes this year.

Ice Cube's son, O'Shea Jackson Jr., starred as a younger version of Ice Cube, with Corey Hawkins as Dr. Dre, Jason Mitchell as Eazy-E, and mainly other newcomers rounding out the cast. Still, they all gave memorable performances and helped bring the movie to life, and their contribution to the excellent work should be recognized.

As one Oscar voter told The Hollywood Reporter back in August concerning the film's award chances:

It succeeds as a studio picture while transcending what that usually is. It’s a very visceral, poetic, terrific film. It is worthy of some real consideration, particularly I think for acting, directing and even best picture — but, but, it’s very early in the season, and there are a zillion other pictures coming out.

Well, all the movies are out now. And while Straight Outta Compton might have missed out on the Golden Globes, its SAG nomination is a sign that there's still hope the film might gain recognition for the Oscars. Let's keep our fingers crossed.

More like this
Yes, That's Lindsay Lohan's Sister Singing In The 'Falling For Christmas' Movie
By Radhika Menon
This James Bond Event At Abbey Road Studios Was A 007 Fan's Dream
By Samantha Rollins
The 'Love, Lizzo' Harry Styles Scene Is Just 1 Moment That Made Fans Feel Seen
By Brad Witter
Taylor Swift Fans Sue Ticketmaster For The Eras Tour “Ticket Sale Disaster”
By Jake Viswanath
Get Even More From Bustle — Sign Up For The Newsletter