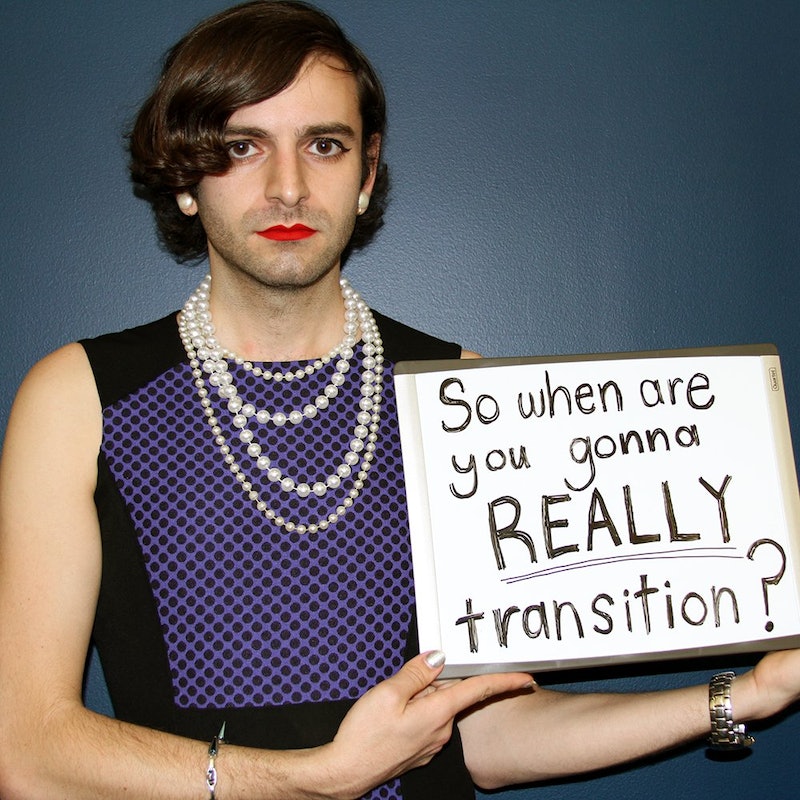 When you're part of a minority group, daily life isn't always made up of violent, sweeping acts of aggression; just as often, it's the smaller microaggressions that add up over time to create a hostile environment. In honor of Transgender Awareness Week, Columbia graduate student Shane Henise created the Trans Microaggressions Project as a way to collect just a few of the subtle, hurtful ways trans people are oppressed, day in and day out.

Published on GLAAD's website earlier this week, the photo essay centers around 16 trans individuals, each holding a sign featuring an instance of microaggression they have faced. Some clearly come from a place of ignorance — "How do you have sex?" and "Are hormones going to change your voice too?" are two such gems. However, other microaggressions are rather more subtle. In fact, some may have been said by people who meant well: Someone who thinks it's "cool" to meet someone who is trans no doubt thinks they're showing support for their friend, even though in reality it reinforces the perception that trans individuals are trophies to be collected.

On their own, such comments could be brushed off, but unfortunately, they're rarely isolated instances. "As heinous as some of these quotes may seem, I know that they have been repeatedly said to trans people, myself included," Henison wrote for GLAAD.

Herein lies the problem: Microaggressions pile on top of one another over days, months, and years to isolate people by virtue of their very existence, and that takes a toll on their mental health. "These incidents may appear small, banal and trivial, but we're beginning to find they assail the mental health of recipients," Derald Wang Sue, PhD, told the American Psychology Association. He was speaking of microaggressions based on ethnicity, but the principle holds true for other minority groups — especially trans individuals, who already face some of the most overt discrimination in the LGBT community.

Judging from Henison's project, many of the microaggressions directed at trans people can be traced to two themes: An obsession with trans bodies (and a total disregard for their privacy), and questioning the legitimacy of trans individuals' gender. "Transgender people's genders are generally viewed as less valid than cisgender people's gender," Henison explained to Mic.

The insidious thing about microaggressions, of course, is that you might not even realize you're perpetuating them, so how do you avoid them? According to Henison, it doesn't hurt to stop and think about what you're saying before you let it fly. "I encourage everyone to examine the underlying meaning behind their comments to trans and gender non-conforming people," he wrote for GLAAD. If it's something that questions a trans person's identity, it's probably best to keep it to yourself — and for goodness's sake, stop asking about their genitalia. That's isn't just invasive and creepy, it's rude.

Check out a few more photos below, and head over to GLAAD to see the whole series.