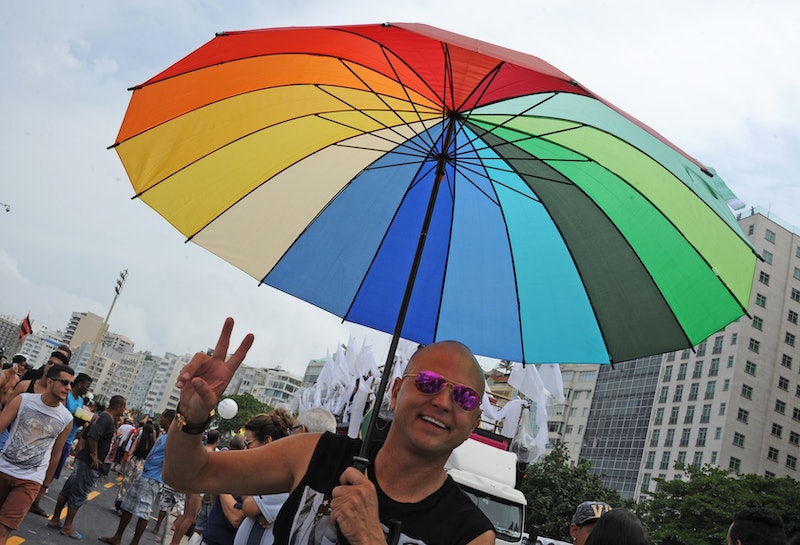 Growing up as a bisexual woman, I spent a significant portion of my adolescence trying to come up with comebacks to microaggressions LGBT people face. Anyone who identifies as LGBT can tell you that discrimination is hardly restricted to the big stuff; for each bakery that outright refuses to cater a gay wedding, or every doctor who won't treat a lesbian couple's baby daughter, there are dozens of smaller "microaggressions" that make up our daily lives. For instance, I honestly can't count the number of times someone has implied I'm more likely to cheat because I'm bisexual, or asked me to explain how lesbian sex works because they "just don't get it."

Microaggressions aren't restricted to LGBT individuals, either. For women, they can come in the form of street harassment, slut-shaming, and mansplaining. For people of color, microaggressions include questions about what country they're really from and assertions that someone can't be racist if they have friends who are people of color. These small instances of discrimination might not seem like much on their own, but they add up incredibly fast. After all, there are only so many times you can hear "gay" used as a slur before you start wanting to develop a mute button for real life. Unfortunately, you can't fight every single instance of microaggression — if you did, you would never have time to watch Pretty Little Liars. Or hang out with friends. Or go to work. Basically, it would take up all your free time and then some.

That being said, the solution isn't to ignore microaggressions when they happen. Instead, try coming up with some standard responses to the most common kinds, and deploy them whenever you want. If you don't feel like dealing with educating someone, of course you certainly don't have to, but there's no denying the rush of a good comeback if that's your jam. If you need a starting point, take a look at some suggestions below.

1. If: Someone Tells You You're Too Sensitive

If someone says something blatantly offensive and you dare to say something about it, there's a chance they're going to tell you that you're just too sensitive. Not only does this put you down, but it also serves to invalidate any of your concerns so they can keep on keepin' on.

Try: Explaining That No, They're Just Being A Jerk

Explain to this person that nope, you're not being too sensitive — plenty of other people agree that "gay" shouldn't be used as an insult. If need be, you can pull up evidence on the Internet, but I wouldn't waste your time.

This is usually directed toward women in same-sex relationships, but it happens to men as well. For whatever reason, people think it's hilarious to joke about how homosexual relationships are cool as long as they get to participate, as if your sex life is somehow open to whatever skeevy person wants to join.

Try: Telling Them To Mind Their Own Effing Business

If someone jokes about "watching" you and your partner, ask them what right they have to comment on your personal relationships, and remind them that you wouldn't presume to comment on their sex life. If you really want to bother them, ask if they would extend the same courtesy to you — after all, turnabout is fair play. Alternatively, you could try punching them in the face, but I'm told that could end in assault charges. (Please don't actually punch someone.)

It's a common response to coming out: The person who claims they knew it all along.

Try: Asking Them How They Think They "Knew" It

No way! Was it the fact that you're holding hands with your girlfriend, or because you made a Facebook post in honor of National Coming Out Day? Because if it's anything else, chances are it's a pretty flimsy reason. Force the microaggressor to enumerate how, exactly, they "knew" you were LGBT and watch as their faces fall with each increasingly insubstantial stereotype.

The alternative to someone saying they knew all along is its exact opposite: Someone saying you don't "look" LGBT.

Sexual orientation and gender identity don't "look" like anything, unless you're wearing a shirt proclaiming the information in gigantic letters. Why not turn the tables on the microaggressor? If you keep it lighthearted, chances are the comeback will get a laugh and point out how ridiculous their statement was in the first place.

5 If: Someone Says You Can't Be LGBT Because You're In A Het Relationship

Bisexuals face some of the most harassment and erasure in the LGBT community, often because people just can't seem to understand that your sexual orientation isn't tied to whoever you're dating at the time. Even well-meaning straight people think we're gay, and gay people think we're straight.

Try: Pulling Up the Definition of Bisexuality On Their Phone

You can also remind them that most people learn object permanence in elementary school. Just because someone is in a heterosexual relationship doesn't mean they've stopped identifying as bisexual — it's a simple concept, but you wouldn't believe the number of people who insist on putting your sexual identity in a box based on who you're dating at any given moment.

Ah, yes — the battle cry of prepubescent boys and frat bros nationwide. Some people are so insecure about coming across as gay that they won't even give a compliment without tacking a "no homo" on at the end.

If you do a good bitch face, reply with as much sarcasm as possible, "Oh, really? I thought you were propositioning me. I had our wedding planned and everything." It serves the dual purposes of making the microaggressor slightly uncomfortable and highlighting how ridiculous it is to worry that much about complimenting someone's sweater. Of course, this method also runs the risk of going over their head. If you're worried that the full effect of your sarcasm will be lost on someone, try simply shrugging and saying a little homo never killed anyone.

7. If: Someone Says It's Cool As Long As You Don't Hit On Them

Much like the disciples of the cult of "no homo," people are often quick to assure LGBT acquaintances that they're totally cool with homosexuality — as long as you don't hit on them, because that would be, like, gross.

Try: Telling Them You Weren't Going To In The First Place

Seriously? There's a perception that just because someone is attracted to the same sex, they're going to hit on everyone and anyone who fits that description — whether it's the married barista, the groom at a wedding, someone's grandmother, or any number of other incredibly inappropriate choices. If someone tells you not to hit on them, just raise an eyebrow and coolly say, "I wasn't going to before, and I'm definitely not going to now." If you're feeling mean, feel free to improvise something about having higher standards, but you might want to only deploy that on special occasions.

8. If: Someone Asks How Sex Works In Your Relationship

If you're LGBT, you've almost definitely been asked this question before, often by the well-meaning yet clueless. "I just don't understand!" they exclaim.

Try: Reminding Them The Internet Exists

9. If: Someone Insists On Using The Wrong Pronouns

This isn't quite a microaggression; a case could be made that repeated, intentional use of the wrong pronouns is straight-up transphobia.

Try: Cutting Them Out Of Your Life — Seriously

Either they don't care about your identity enough to make an effort, or they're intentionally misgendering you — either way, it's not healthy. It's not your job to keep correcting someone every time they get it wrong, and if it keeps happening, there's no reason to stick around that kind of negativity.

More like this
The 19 Best Tweets & Memes About Bisexual Awareness Week
By Lexi Inks
10 Ways To Be More Empathetic To Your Partner
By Raven Ishak and Lexi Inks
An Honest Review of MeUndies Boxers, According To A Non-Binary Person
By Megan Lasher
Pro Footballer Zander Murray Is "Blown Away" By Support After Coming Out
By Sam Ramsden
Get Even More From Bustle — Sign Up For The Newsletter