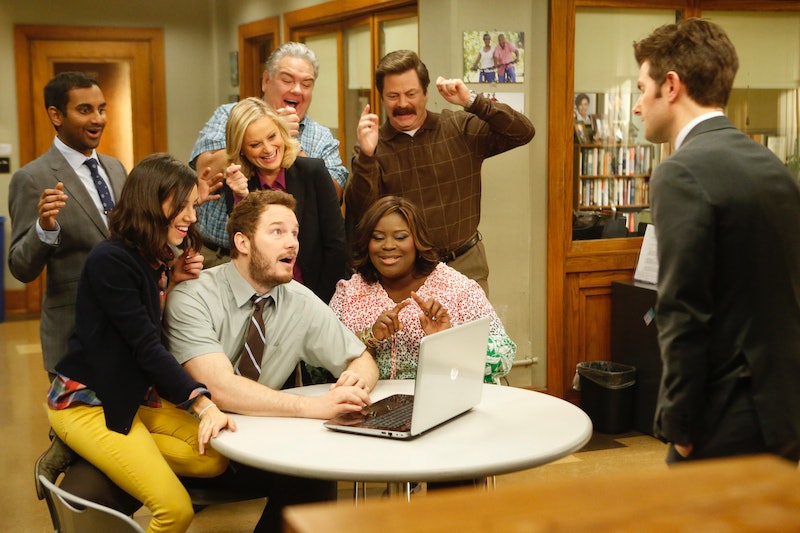 Not only did fans of NBC's Parks And Recreation have to suffer through the emotional despair of watching the show's final season earlier this year, but now we have also been forced to suffer the indignity of watching our favorite comedy be completely snubbed by the Hollywood Foreign Press Association... again. Over its seven year run on NBC, the workplace sitcom has only managed to procure three nominations for Best Comedy Series and one nomination for its star, Amy Poehler (which she miraculously won two years ago). But for its critically-acclaimed final season? Nada. Zilch. Bupkis. The Golden Globes failed to nominate Parks And Recreation in a single category.

As great as Poehler is as Leslie Knope, Parks And Rec is at heart an ensemble show, and it's shocking that none of the rest of the cast ever got the recognition they deserved. But you know what's better than a Golden Globe? Hilarious gifs. What are you gonna do with a useless trophy, anyway? It's just gonna sit on a shelf and collect dust — whereas gifs are super useful in everyday life. Sure, a Golden Globe may be worth approximately $14.2 million, but a picture is worth a thousand words... which means a gif is worth, like, ten thousand words, at least.

Here are 17 gifs to make you feel better about Parks & Rec's egregious snub.

Literally me every time I encounter a non-fan.

It's a close run between butter and bacon, TBH.

Because sometimes we all get a little too excited.

So handy for whenever you need to dramatically exit a convo.

Basically my reaction to the HFPA Thursday morning.

Thank you, Tom Haverford. I just might do that.

9. This Declaration Of War

For use on mortal enemies only.

We are witnessing a collision of greatness, people.

Never play Settlers Of Catan if you want to stay friends.

We all need a shoulder to cry on sometimes.

Let it all out, you guys.

16. This Choice Of Activity

Because we all need some warm fuzzies after those ice cold snubs.

Sure, these gifs don't completely make up for the fact that we won't be getting to root for Parks and Rec when the 2016 Golden Globes roll around. But, hey, at least they make your world that much of a brighter place — just like Parks and Rec itself.

More like this
Oops! The 'Stranger Things' Monopoly Game Has Spoilers For Season 4
By Alyssa Lapid
20 Photos From The 'Stranger Things' Season 4 Premiere To Make You Feel Old
By Alyssa Lapid
Grey's Anatomy Fans Are Worried They Figured Out The Sad Reason Japril Returns
By Brad Witter
'Obi-Wan Kenobi' Takes Place After This Key Star Wars Movie
By Arya Roshanian
Get Even More From Bustle — Sign Up For The Newsletter