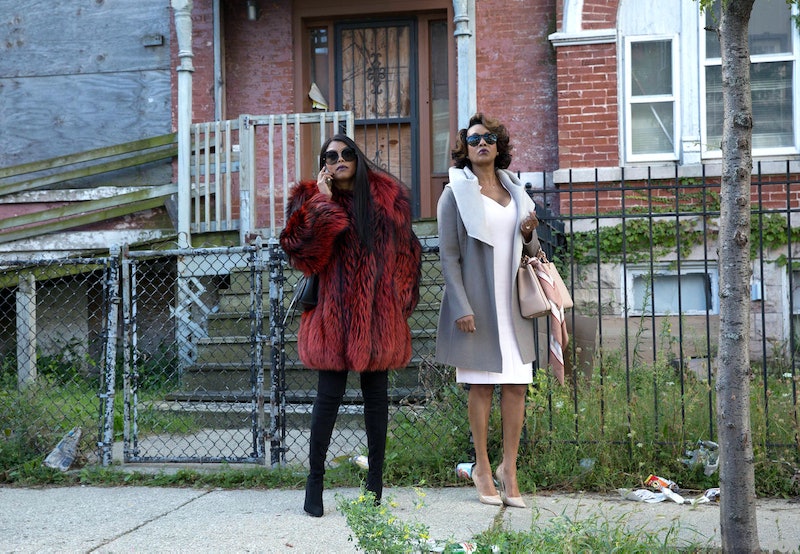 The 2016 Golden Globes nominations were announced Thursday, and amongst a handful of other excellent television series, Empire is up for Best Drama. The show is in the midst of only its second season, so nabbing a nomination for a category this huge is a major honor, and it's totally deserving of it, at least IMO.

We first met Cookie Lyon, A.K.A. Taraji P. Henson, in early 2015, and have since become completely enthralled by her music mogul family with all its dysfunctional drama, shocking romances, and over-the-top personas. Yes, director Lee Daniels' new masterpiece has pretty much got it all — super dope music, jaw-dropping suspense, and loads of steamy love scenes. No wonder it's been shattering records and owning TV ratings like it's nobody's business. But there's another major factor for which the show owes its wild success — a killer sense of fashion.

From a bodysuit made entirely of metal chains to a head-to-toe leopard ensemble, Cookie's wild and eccentric getups are literally everything your fashion dreams are made. But she's not the only one who slays the style game. The men on the show are just as stylish, rocking tailor-made suits, leather-embossed activewear, and, of course, tons of glitzy chains. Basically, the show has got major swag.

Let's take a look at 9 of the best fashion moments that prove Empire is the most stylish show on TV.

Cookie departs from prison after 17 years in this killer ensemble. I became a fan of her style from the get-go.

Hakeem's fashion sense is always bold and colorful, and this red striped jacket is one of my favorites.

Even when the Empire boys do minimalism, they do it with so much edginess and style.

This is giving me major Mary J. Blige vibes circa the 90s, and I'm loving it.

This ensemble looks like it came straight off the Yeezy Season 1 runway.

Cookie has always got some kind of brightly-colored fur on, and it always adds an extra oomph to her looks.

You can always count on Empire to serve up vibrant hues and super cool patterns.

Want more Empire? Check out the video below, and be sure to subscribe to Bustle’s YouTube page for more hacks and tricks!