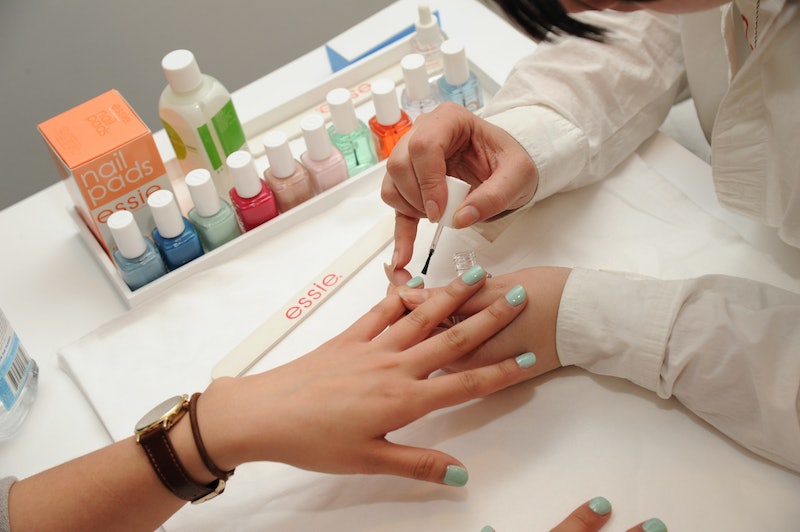 Everyone's favorite nail polish brand, Essie, is re-releasing Starry Starry Night in a new collection all about discontinued polishes. The Retro Revival collection will be released for the brand's 35th anniversary in early 2016. I've been dreaming about the five shades that have already been released and waiting patiently (or anxiously) for the final polish to be announced, just hoping it would be this iconic shade. Let's just say I'm a bit of a nail polish fanatic.

The final re-released shade was announced on People Style's Instagram Thursday morning, and, as I mentioned above, it will be Starry Starry Night, a luscious midnight blue shade that was originally released in 1985. That's right — you will no longer need to score the pages of eBay in order to get your hands on this sought-after shade. In January 2014 the shade apparently sold for a whopping $250 in an auction on the site, reports People Style. Talk about being in love with a nail polish!

Having your favorite polish become discontinued is the worst, but having to wait for for it to come back may be even more stress inducing. Try practicing some of these killer nail art tutorials while you're waiting to get your hands on these newly re-released polishes.

Starry Starry Night is the perfect polish to use in a galaxy nail tutorial. Deep blue with a hint of glitter act as the the background for a swirling sky.

This new nail trend would look amazing layered over Life Of The Party.

Any one of the revival shades would look great with a slow gradient into Birthday Suit. Bikini With A Martini makes the look playful while Life Of The Party turns it into something more festive.

Using Sequin Sash in this tutorial would take the look from playful and bright to classic and muted.

5. Sheer Marble Nail Art With Bikini With A Martini, 2006

I think Bikini With A Martini would look stunning with Cabana Boy or Birthday Suit in a marbled nail look.

Using a mix of the revival shades will work perfectly for this nail tutorial! Life Of The Party and Cabana Boy would make for a great holiday nail.

More like this
12 New Year's Nail Ideas That Are Truly Stunning
By Jordan Murray
20 Beauty Gifts Under $25 That Make Perfect Stocking Stuffers
By Jordan Murray and Audrey Noble
10 Makeup, Hair, & Skin Care Gifts That Beauty Lovers Will Drool Over
By Erin Stovall
The 15 Best Skin Care Gift Sets You Can Buy RN
By Rachel Lapidos
Get Even More From Bustle — Sign Up For The Newsletter