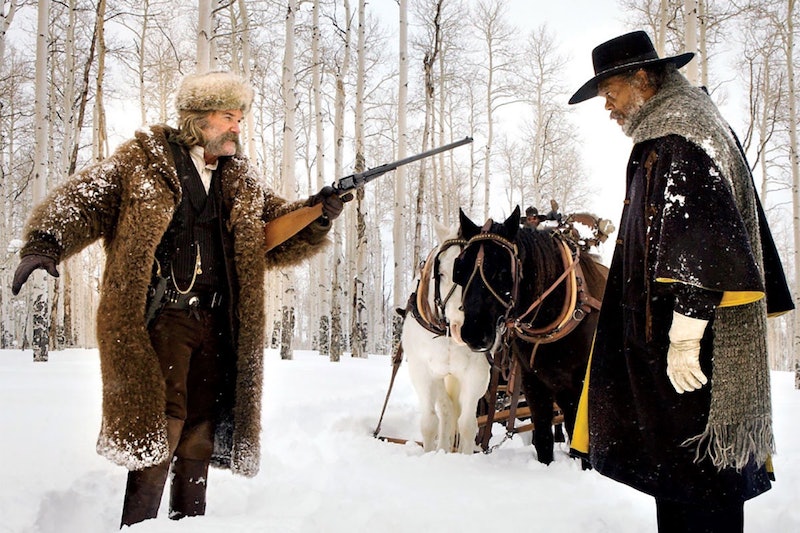 Quentin Tarantino has returned after a three year absence from theaters with another Western, The Hateful Eight . After initial thoughts that the new movie was a sequel to the director's last film, Django Unchained, proved to be untrue, some fans are now wondering if The Hateful Eight is a remake. After all, Westerns aren't all that common these days, and the movie's catchy title does sound somewhat familiar due to the clear influence of the classic Western, The Magnificent Seven. So is The Hateful Eight a remake of an older film?

Nope. The Hateful Eight is an original film, and written by Tarantino. The film tells the story of bounty hunter John "The Hangman" Ruth (Kurt Russell), who is taking his prisoner Daisy Domergue (Jennifer Jason Leigh) across Wyoming to her awaiting execution, where she is to be hanged for her crimes. Along the way, they meet two other men who join their party, and a blizzard then forces the four of them to seek cover in a cabin inhabited by four other men, none of whom can be described as overly-friendly. With eight outlaw types now in the cabin and facing no escape due to the storm, they begin to turn on one another as they each have their own particular goal in mind. So that's the story, and while it is new, it definitely bears resemblance to some other works.

Tarantino cites his biggest influences not in another movie, but in a television show. Three television shows to be precise: Bonanza, The Virginian, and The High Chaparral. All three were Westerns that aired on NBC throughout the 1960s and early 1970s (and in Bonanza's case, started in 1959). Each show takes place on a ranch, and it was a certain type of episode common to all of them that gave Tarantino the idea for The Hateful Eight. In said episodes, a group of outlaws, often consisting of high-profile guest stars, would hold the heroes hostage at their own ranch. Tarantino thought it would be interesting to use this concept of people being trapped together in a Western setting, but leaving the traditional heroes out of the picture entirely and instead asking the question, "What if they're all bad guys?"

The director told Deadline in November, "I don’t like that storyline in a modern context, but I love it in a Western, where you would pass halfway through the show to find out if they were good or bad guys, and they all had a past that was revealed. I thought, ‘What if I did a movie starring nothing but those characters? No heroes, no Michael Landons (who starred in Bonanza). Just a bunch of nefarious guys in a room, all telling backstories that may or may not be true. Trap those guys together in a room with a blizzard outside, give them guns, and see what happens."

So that's how the film came about, but some fans have noticed a similarity to another film as well. Tarantino's first film in fact, Reservoir Dogs . That movie took place largely in one room, with a dangerous collection of characters revealing more about themselves as the tension mounted. The Hateful Eight follows a similar trajectory, and the similarities haven't been lost on the film's cast. "You have to ask Quentin, but I do think it’s a bit of an intentional homage to Reservoir Dogs,” Michael Madsen, who stars in both films, told Entertainment Weekly in May. “It’s one of those pictures where nobody really knows who anyone really is."

So even though The Hateful Eight is an original work, it probably wouldn't exist without the influences that paved the way for its inception. Whether or not it does justice to the Western TV shows of the '60s, or to Tarantino's own work, is something fans will have to wait until Christmas to find out.