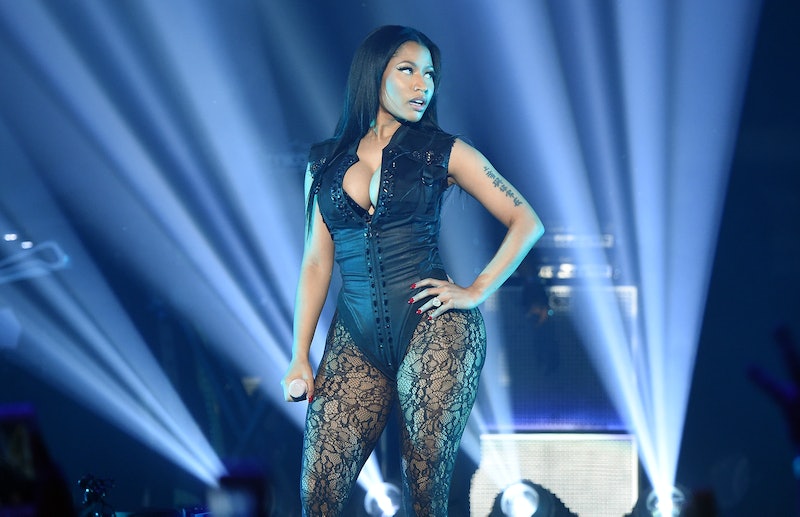 Nicki Minaj is definitely at the top of the rap game right now. She's not only the most famous female rapper out there, but she's also one of the biggest names in hip-hop. Her critically acclaimed album The Pinkprint came out a year ago, and she is still killing it. On Thursday, rumors began to fly that Minaj is releasing a mixtape sometime soon, rumors launched by the rapper herself in an interview with Billboard. But, even more interesting than the possible mixtape is Minaj's reasoning for wanting to put one out. She talked about the amazing year she's had, and said "I have to set an example for female rappers. I’m at the top of that food chain, and it’s important to lead by example."

And what an example she's setting. Minaj was just named one of Entertainment Weekly' s Entertainers Of The Year and was nominated for three Grammy Awards. She's even creating a sitcom for ABC about her childhood. Clearly, she was very correct in saying that she's at the top of the food chain. She's won a Video Music Award and two American Music Awards in the past six months, for pete's sake. There's no better candidate for the leading example of how to be a woman in the rap industry than Minaj.

Not only is she talented in her own right, but she knows how to play the game stay relevant. She's following in the footsteps of Beyoncé and Lady Gaga by going beyond her music and becoming a true entertainer. Here's a look at how Minaj is leading the way for lady rappers.

1. She Works Well With Others

Minaj is frequently collaborating with other artists. She's made tracks with Beyoncé, Justin Bieber, Ariana Grande, and Drake, to name a few. She's not afraid to work with other people, and those collaborations pay off. Her song "Only" is up for Best Rap/Sung Collaboration at the Grammys. She's a real team player.

Even when she's not putting out music, Minaj knows how to stay at the forefront of pop culture. She's taken on acting roles in The Other Woman and the upcoming Barbershop sequel, not to mention developing a show for ABC Family, which she will narrate. The star likened it to Everybody Hates Chris. She's not going to let her star fade any time soon.

Minaj is on her way to becoming a mogul. In addition to her entertainment ventures, Minaj has three perfumes, a Barbie doll, and numerous endorsement deals. She's even a co-owner of the music streaming service Tidal. She's made her name into a brand, and it's proving to be quite the lucrative deal. She has frequently appeared on the Forbes Hip-Hop Cash Kings list.

4. She Speaks Her Mind

Say what you want about Nicki Minaj, just be prepared for her to respond. She's not one to stay quiet if she feels like she's been wronged. She famously called out Miley Cyrus at this year's MTV VMAs over a perceived slight. She even got in a Twitter feud with Taylor Swift. Minaj will not hesitate to say how she feels, and it's wonderful.

When a feud broke out between her boyfriend, rapper Meek Mill, and her friend and frequent collaborator, Drake, Minaj didn't get involved. She was very classy and stayed out the fray. She didn't publicly take a side when she easily could've done so. It might have been the less interesting PR move, but it made it clear that Minaj is loyal to her man and her friends.

The main reason that Nicki Minaj should be a role model for up and coming rappers is that she's extremely talented. Whether she's performing in packed arenas or singing on low-budget mixtapes, Minaj's skill is impressive. She told Billboard that she'd like to drop a new mixtape soon, so, let's hope we get new Minaj jams for Christmas this year. I think we've all earned that.