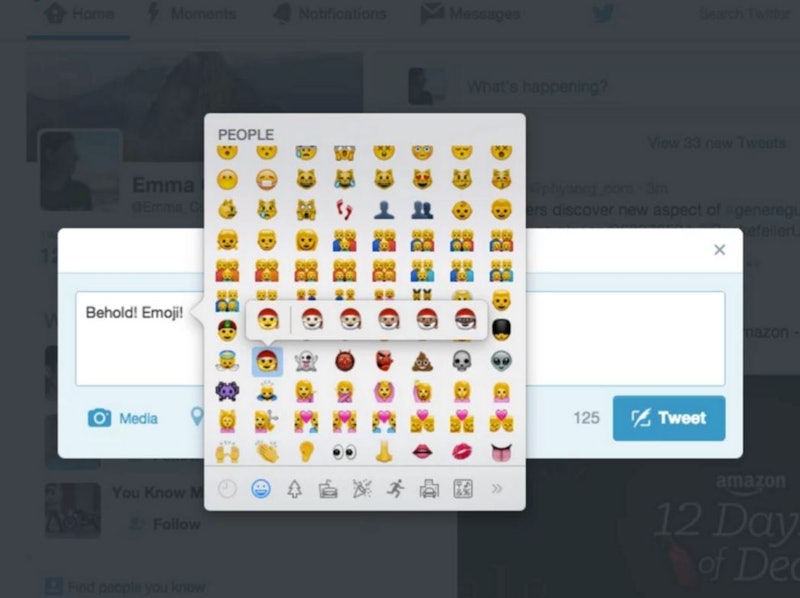 Today is a day of glad tidings: New emoji have arrived on Twitter — including, of course, the all-important racially diverse emoji skin tone modifiers — allowing us to elevate our tweet game to new heights. But how exactly do you get this newfound magic to work? It's OK — figuring out how to use the new diverse emoji on Twitter is actually pretty easy once you get the hang of it. I promise.

Emoji on Twitter are always fun, whether you're using them in casual conversation or whether Twitter itself is adding them at the end of hashtags for you (which, by the way, has been happening a lot more frequently lately). But until recently, Twitter wouldn't display certain emoji — the ones that came with the latest rounds of Apple updates. It was a big shame, since that meant that, among other useful emoji, diverse emoji options weren't available on the microblogging social network. Trying to type an emoji with a custom skin tone would simply not produce the desired results.

But, as it has in the past, Twitter has now solved the issue: We are free to tweet as many diverse emojis as we want. Hooray! So how do you go about getting this to work? Unfortunately Android devices still don't support the skin tone modifiers in question, but here's the method for anyone using an iPhone, a Mac, or a PC.

In order to tweet diverse emoji from your Mac, first just start writing your tweet. When you're ready to put in an emoji, hold Command + Control + Space down, and up will pop your emoji keyboard. In order to change your emoji from the cartoonish bright yellow default, click and hold on one of the customizable emoji — like, for instance, Santa Claus — and then pick which modifier you want. Easy-peasy.

Tweeting diverse emoji from your iPhone are even easier: You insert emojis in tweets in the same way you use them in texts. Once you've enabled your emoji keyboard under Settings, open a new tweet and select the smiley face at the bottom of the screen to pull up the emoji keyboard. Then hold down on the emoji you want to customize and select the one you want.

If you have a PC but still want to use diverse emoji on Twitter, your best bet is to use Chrome as your browser and download an extension called Chomoji. From there you can copy and paste whatever emoji you want into your tweets.

Best of luck and happy emoji-ing!

More like this
Here's What The Face Emojis Actually Mean
By Bustle Editors
What Does “Gatekeeping” Mean On TikTok? The Viral Term, Explained.
By Courtney Young
What Is “Night Luxe?” Breaking Down TikTok’s New Aesthetic
By Courtney Young
TikTok Is Using A ‘Love Island’ Sound To Expose Their Weird Crushes
By Courtney Young
Get Even More From Bustle — Sign Up For The Newsletter