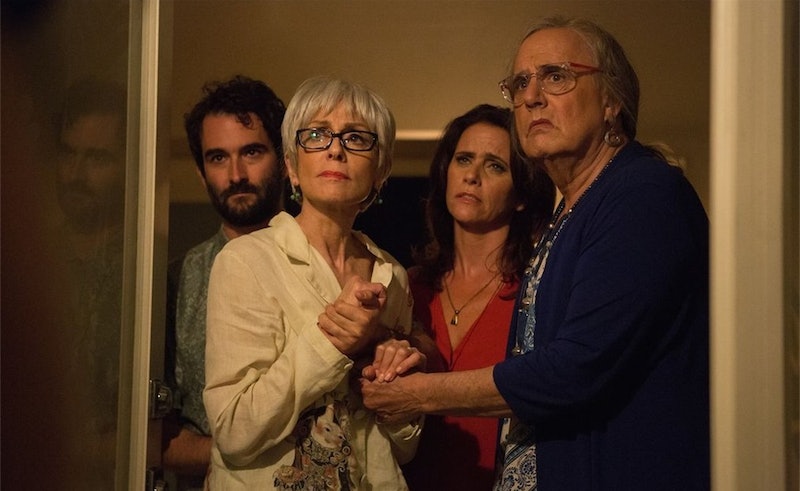 If cable was once the new broadcast, then streaming is now the new cable. For the first time in over a decade, HBO didn't lead the Golden Globe nominations for television, not because they're not great at what they do, but thanks entirely to a surge in the quantity of quality content coming from outlets like Hulu, Netflix, and Amazon. Speaking of Amazon, that streaming service's half-hour family dramedy Transparent was one of the many unconventional series to land major honors this Thursday, earning nods for Best Comedy Series, Best Actor (for Jeffrey Tambor), and Best Supporting Actress (for Judith Light). And, what perfect timing, too, considering the show's second season is available to stream Friday. But first, let's recap Transparent Season 1 before we dive head-first into the new batch of episodes.

Created by Jill Soloway and partially based on her own experiences with her father's transition, Transparent tells the story of Maura Pfefferman, a transgender woman who is the head of a Jewish family and is in the process of transitioning. Along the way, she has to deal with the various reactions of her ex-wife and three grown children. In the Season 1 finale, "Why Do We Cover The Mirrors?" the entire Pfefferman clan gathered for a funeral, and several percolating tensions finally came to a head.

Here's where the Pfefferman family left off last year:

Throughout the course of the season, she gradually came out to each of her children in turn — although it was revealed that her ex-wife Shelly had actually known the truth for many years. Always open-handed, she helps keep her two youngest (and struggling) children, Josh and Ali, afloat. This came to a head in the finale, when Ali confronted her Moppa about the reason she let Ali cancel her bat mitzvah when she was a teenager: So Maura could attend what the show called a "cross-dressing camp." Ali scolded Maura for bad parenting, but Maura refused to be cowed. "If I didn’t give you any money, would you even talk to me?" she asked her daughter sadly, who ran out of the house soon after.

Shelly and Maura divorced long before the events of the series started, sometime after she was honest about her gender identity to her wife. Shelly remarried Ed, an elderly man who lost the ability to speak. Over the years, she and Maura grew close again and are now on friendly terms. Ed passed away in the penultimate episode, and it was his funeral the Pfefferman clan attended in the finale. Shelly enjoys taking care of everyone and was quick to comfort Maura after her fight with Ali.

Early in the season, the eldest Pfefferman child reconnected with Tammy, a woman with whom she'd had a relationship in college — and impulsively ended her marriage with Len to be with her. But, when Tammy was reluctant to leave her own family, Sarah started having second thoughts and gradually reconnected with Len. In the finale, Sarah and Len almost hooked up in the laundry room during shiva, until her husband let her know that she couldn't have it both ways: She had to choose one of them. Sarah left the laundry room and promptly proposed to Tammy, who accepted.

The middle sibling, Josh is a manager for rock bands who has a complicated relationship with pretty much every woman in his life. He impregnated one of the members of a band he manages, and lost his job when he freaked out after she had an abortion. Fans also learned that when Josh was a teenager, he had a relationship with his babysitter — a relationship he considers a lovelorn affair, and which everyone else considers statutory rape. When he met a rabbi named Raquel, the two quickly hit it off... although she balked when she found Tammy's hot young ex-stepdaughter Bianca staying over at Josh's house. In the finale, after Ali found out that Josh had been sleeping with her best friend Syd, she spitefully told Raquel about Josh's "love addiction," and Raquel left him. Shortly thereafter, Josh's former babysitter, Rita, introduced him to a teenager named Colton: His son.

The youngest Pfefferman embarked on her own journey of gender and sexual discovery while learning about her Moppa's transition. She started taking a Gender Studies class and had a brief fling with the transgender TA, Dale. When her best friend Syd admitted that she's had feelings for Ali since they were kids, Ali balked; although she was quick to lash out at Josh when she learned that he had slept with Syd. In a flashback, we learned that on the day Maura let Ali cancel her bat mitzvah so she could go to the aforementioned cross-dressing camp, an unsupervised Ali made her way to the beach, where she spent the night with a much older man. Despite running out after her fight with Maura, Ali reluctantly returned to the house at the end of the finale to eat dinner with her eclectic family: Maura, Shelly, Sarah, Tammy, Josh, Rita, and Colton.

The finale ends with Colton naïvely asking if they can have a prayer before dinner. Oy gevalt. Can't wait to see the drama Season 2 brings!