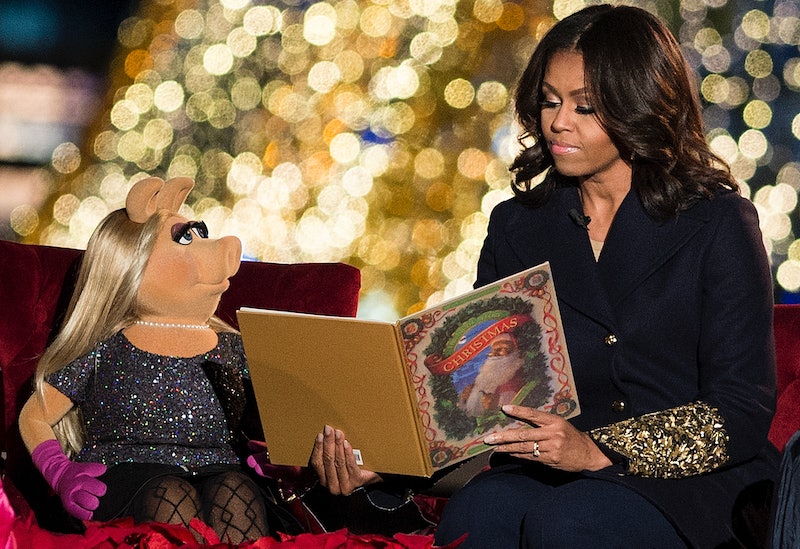 It's December again, that magical time when we all talk obsessively about our favorite books of the year. The First Family are just like any other — except that, you know, People magazine cares what they think. An article published Wednesday revealed that FLOTUS Michelle Obama's favorite book of 2015 is The Light of the World.

FLOTUS has undoubtedly met the book's author before. Back in 2009, Elizabeth Alexander read her poem, "Praise Song for the Day," at Barack Obama's first inauguration ceremony. Don't think that this small familiarity makes the First Lady's book pick any less genuine, though. Critics have heaped praise on The Light of the World, with the New York Times, Publishers Weekly, and the Washington Post naming it one of the year's best books.

The Light of the World centers on the loss of Alexander's husband, artist and chef Ficre Ghebreyesus, whose painting, "Solitary Boat in Red and Blue," serves as the book's cover art. The Yale professor unexpectedly finds herself playing the role of single mother to two teenagers. More than anything, The Light of the World is a testament to a 16-year romance that ended far too soon.

People's write-up proves that the First Lady has great taste in books (like we'd expect anything different), but husband Barack is no slouch, either. The POTUS named Lauren Groff's Fates and Furies as his favorite title of 2015.

More like this
16 Novels That Paint A Realistic Portrait Of Abortion
By K.W. Colyard
5 Gripping Books To Read From Women’s Prize For Fiction Winner Ruth Ozeki
By El Hunt
Here’s How Lizzo Is Supporting Abortion Rights After The Roe v. Wade Reversal
By Brad Witter
Lauren Rae Is Bringing Back The Sex And The City Vibes In Her New Memoir
By Shahed Ezaydi
Get Even More From Bustle — Sign Up For The Newsletter