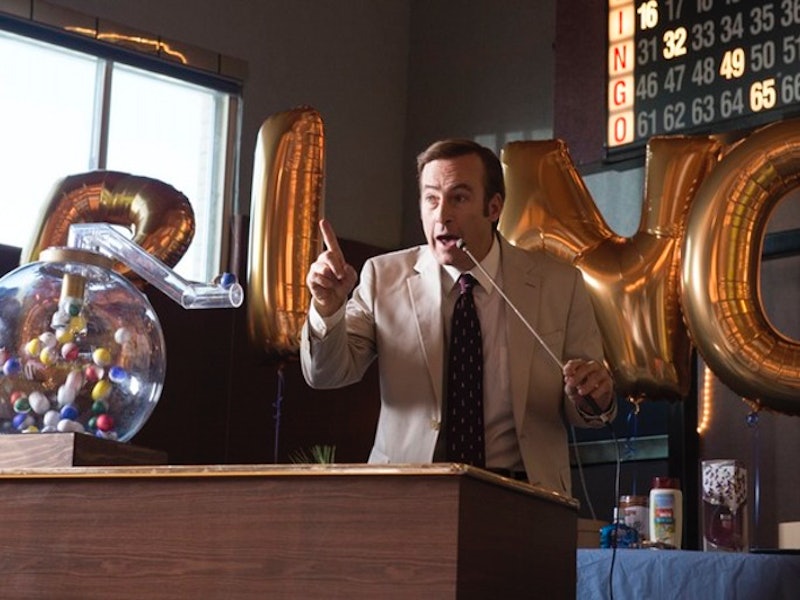 If you're anything like me, it didn't take you long to get on board with Better Call Saul , the Breaking Bad spinoff we always knew we needed but never expected to actually get (but boy, are we glad we did). One of the most memorable and hilarious characters from the original series on his own show, exploring the events that led to him becoming the shady lawyer we all came to know and love for five seasons? What's not to love? Nothing, really. Not that we're one season down and there's another on the way in February, I'd say it's time to start getting excited. Thankfully, that's a lot easier now that a new Better Call Saul Season 2 teaser has been released.

In case you forgot, Season 1 ended with Saul basically deciding that following the straight and narrow just wasn't working out for him and instead choosing to embrace his criminal tendencies. Thank God for that, because I don't think I could handle a law-abiding Saul. Where would the fun be in that? Leaving things the way they did in the season finale paved the way for what's sure to be an explosive and amazing Season 2, since now the fun stuff begins. Something tells me Saul's really going to get into some trouble, and I can't think of anything better.

AMC posted the teaser on their Facebook page on Friday, and unfortunately made it unembeddable (boo!) so you'll have to be logged in if you want to watch it. It's a small price to pay, really, since the video is worth it. In the clip — which is way too short at only about 20 seconds — a frustrated Saul looks on as a series of conversations plays in his head. In particular, Mike's voice questions Saul about doing the right thing, which Saul promises to never let hold him back again. Sounds pretty promising to me. If only he knew just how bad things would get in a few years time, when he was introduced to Walt and Jesse Pinkman. Ah, ignorance is bliss, isn't it?

Better Call Saul Season 2 doesn't premiere until Feb. 15, which isn't that far away if you think about it — only eight weeks, give or take. In the meantime, you can watch Season 1 again and keep your eyes peeled for more sneak peeks, which will no doubt come as the premiere draws closer. At least that's what I'm hoping.

More like this
'Broadchurch' and 'I Hate Suzie' Casts Join Forces For Gritty BBC Drama
By Sabah Hussain
Netflix Just Revealed When 'Never Have I Ever' Seasons 3 Will Premiere
By Gretchen Smail and Alyssa Lapid
'Unforgotten's Brand New Character Joins At A Pivotal Moment For S5
By Bustle UK
Will The Pentaverate Get A Season 2?
By Kadin Burnett
Get Even More From Bustle — Sign Up For The Newsletter