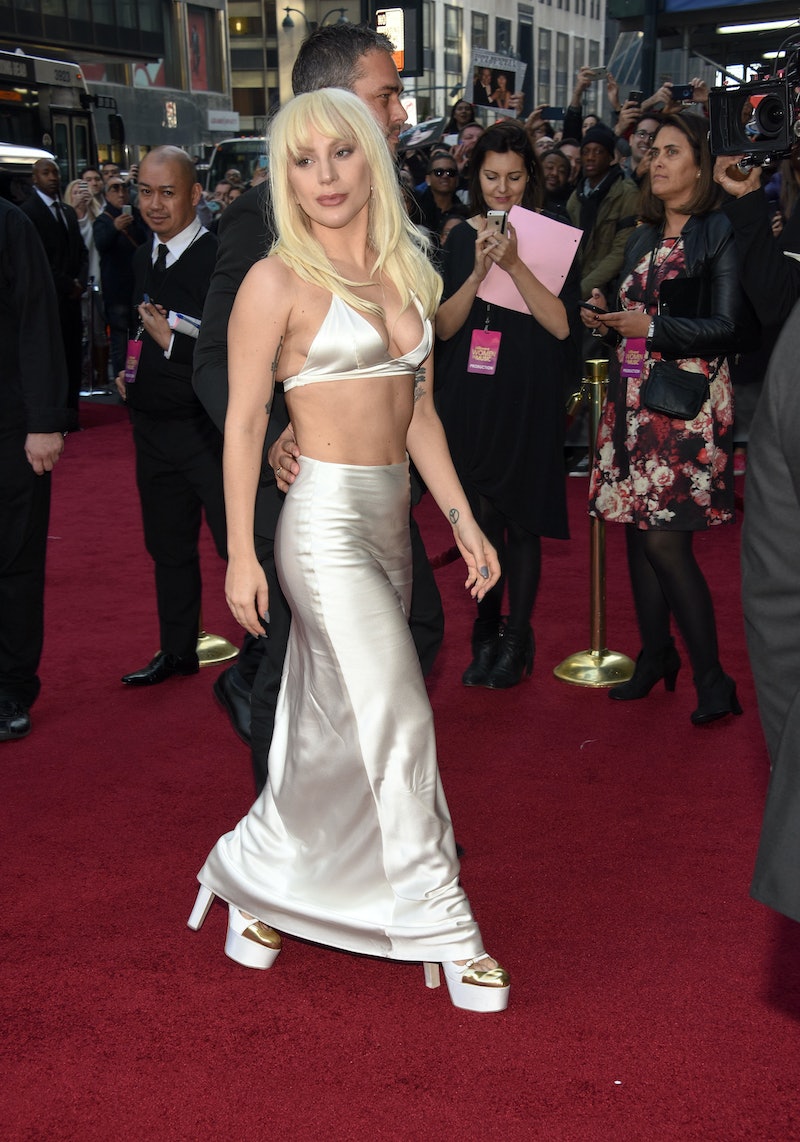 Proving that both her career and and fashion game are still going strong, Lady Gaga rocked a crop top maxi skirt combo as she accepted her Billboard Woman of the Year honor. Crop tops and maxi skirts are totally on-trend, but Gaga isn't one to follow a trend without putting her own twist on it. The singer incorporated '90s trends into her look with a satin crop top, a matching high-waisted maxi skirt, chunky white platform heels, and a shaggy blonde wig with wispy bangs, and the result was befitting of the Queen Monster.

In addition to looking fantastic (as usual), Gaga took the ceremony as an opportunity to speak out an issue close to her heart with a performance of her song "Til It Happens To You." Written in collaboration with Dianne Warren for The Hunting Ground, a documentary about on-campus sexual assaults, "Til It Happens To You" draws on Gaga's own assault at the age of 19. Gaga has been plagued with criticism from the beginning of her career, but her willingness to openly address her struggle with depression after her own assault shows just how dedicated the singer is to using her music to make a lasting impact.

While we're checking out Gaga's outfit, let's also not forget that Gaga was also just nominated for a Golden Globe award for her performance in American Horror Story: Hotel. Dead career? Doesn't look like it to me.

Most celebs who go for the crop top maxi skirt combo keep to a classically feminine silhouette with a full skirt, but part of the reason I love Gaga's take on the look is because it departs from the norm. It has a late '90s lingerie vibe that I'm digging, and I think her disheveled hair brings it together perfectly. Take a look through how other celebs wore the trend below to see which approach you prefer.

Hadid went the same '90s route as Gaga, but I still prefer Gaga's take. I'm not a fan of lace up detailing.

We can always count on Emma Roberts for pretty ensembles. I like the mixed prints she chose.

Smalls is totally pulling an Angelina with this skirt. And it's totally working for me.

Another point for the slimline silhouette, here.

As long as she keeps starring in action movies, Emily Blunt can do no wrong in my book. She looks fantastic.

More like this
Tom Cruise Gives His Honest Review Of Lady Gaga’s New Song For 'Top Gun: Maverick'
By Hugh McIntyre
Dua Lipa Wore See-Through Dress On The Cover Of Vogue
By Allie Fasanella
Rihanna Wore A Sparkling Lingerie Look For Date Night With A$AP Rocky
By Allie Fasanella
Doja Cat Wore Surrealist-Inspired Schiaparelli To The BBMAs
By Dominique Norman
Get Even More From Bustle — Sign Up For The Newsletter